Neuromuscular Medicine at Johns Hopkins comprises a range of clinical care and research facilities and programs, where talented minds collaborate on exploring new avenues in diagnosis and treatment of neuromuscular disorders.

Learn about the program

Learn more about the neuromuscular conditions we treat:

About Dr. Daniel B. Drachman One of the founders of the Johns Hopkins Department of Neurology when it opened in 1969, Dr. Drachman was the first head of its neuromuscular laboratory and program, of which he was chief for 30 years. He trained more than 50 clinical scientists and basic researchers, many of whom became leaders in neuromuscular studies and patient care.

Dr. Drachman was a leading authority on myasthenia gravis and other neuromuscular diseases. His four decades of findings on myasthenia gravis, which he determined was an autoimmune illness in which the body’s immune system attacks the nerve receptors in muscles, has transformed it from a frequently fatal disease into a highly treatable one. Research he began on the botulinum toxin in the 1970s also led to the development of Botox as a clinical treatment for neuromuscular ailments. 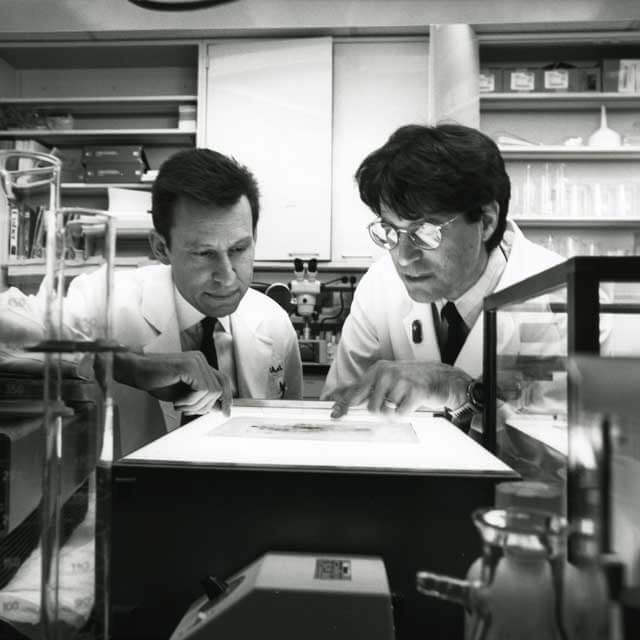 Drs. Jeffery Rothstein and Ralph Kuncl in a lab.

Patient-oriented research has been a central focus of the Neuromuscular Division from the beginning. Dr. Drachman went on to establish a clinical laboratory for neuromuscular pathology, which to this day serves patients and provides important muscle, nerve, and immunological materials for research.

Some of the world’s best minds have come to Johns Hopkins to explore the science, improve diagnosis and transform management of muscular dystrophy, neuropathies and other disabling and life-threatening diseases.

Daniel B. Drachman’s original drive and ingenuity are reflected in the division to this day, as the group continues to grow in leadership and international influence.