The Johns Hopkins Research Advocacy Program inspires and empowers individuals with breast cancer to become research advocates who can understand and inform the bench-to-bedside process through collaborative partnerships with scientists, researchers, and clinicians at the Johns Hopkins Women’s Malignancies Group and beyond.  The program’s vision is to become a leading research advocacy training program that cultivates innovative and patient-informed research that improves outcomes for individuals with breast cancer of all stages and for those at-risk. 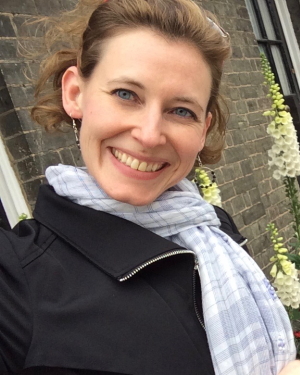 Ms. Hodgdon has been a metastatic breast cancer (MBC) patient and advocate since her diagnosis in April 2015. She was fortunate enough to have a complete response to her treatments and with this "bonus" time, decided to leave her professional career as a conservation biologist to become a full-time patient advocate. Christine has attended several scientific conferences, participated in advocacy trainings, and served as a research grant reviewer and helpline volunteer. Her goal as an advocate is to influence and improve research outcomes by 1) empowering patients through education and 2) helping the science community understand that research is most effective when the patient voice is represented. Christine created her own search algorithm to capture all possible clinical trials for MBC patients and launched a website, TheStormRiders.org, which includes a searchable trial and drug database, a calendar of events, and research articles all specific to MBC. She also co-founded the GRASP program, Guiding Researchers & Advocates to Scientific Partnerships, in order to bridge the gap that often exists between scientists and patient advocates. Important to any of the initiatives with which Christine is involved is ensuring that health disparities are addressed, especially in underserved and vulnerable populations that are disproportionately impacted by breast cancer. 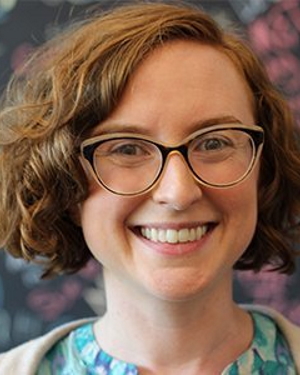 Ms. Horn was diagnosed with stage II, ER+ breast cancer in 2014 when she was 26 years old and learned of her BRCA1+ status after her diagnosis. After completing surgery and chemotherapy, she sought ways to give back to the cancer community. She became a Young Advocate with Living Beyond Breast Cancer in September, 2016, where she was bitten by the advocacy bug. Since training with Living Beyond Breast Cancer, she has reviewed grants for the Department of Defense Breast Cancer Research Program and joined the Johns Hopkins Medicine Young Women’s Advisory Committee for their Breast Cancer Program. Currently, Sam is a member of Young Survival Coalition’s Respected Influencers through Science and Education (RISE) class of 2020 and continues advocacy efforts at Johns Hopkins.

Other advocacy includes giving testimony to the Maryland State Senate Finance Committee to lobby for Maryland insurers to cover the cost of fertility preservation and media coverage for the same bill. Her personal and professional interests came together when she accepted a position as an Adolescent and Young Adult Patient Navigator with the Ulman Foundation, where she fostered a community of support for young adults ages 15-39 impacted by cancer. She is currently the Outreach Coordinator for the Lapidus Cancer Institute at LifeBridge Health in Baltimore, MD. 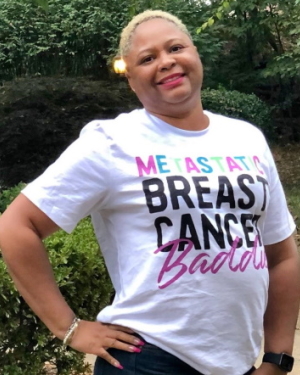 Ms. Randall is a mother and Army veteran who currently works for the federal government. In October 2017, during a routine OB/GYN appointment, Chawnte’s doctor found a lump in her right breast. Following an ultrasound, mammogram and biopsy of the tumor, Chawnte was diagnosed with Stage 2 triple-negative, invasive breast cancer. She had a double mastectomy and began chemotherapy in January 2018. After completing nine cycles of chemotherapy in April 2018, Chawnte showed no evidence of disease for 11 months.

Then, in March 2019, she began experiencing shortness of breath, difficulty moving her arms and a burning pain in her breast. Her doctor ordered an X-ray and a CT scan which showed she had a lesion on her sternum. In April 2019, after a biopsy of the lesion, she was diagnosed with Stage 4 metastatic triple-negative breast cancer. Chawnte received radiation therapy for her bone lesions initially but after progression to her liver; Chawnte enrolled in a clinical trial at Johns Hopkins. 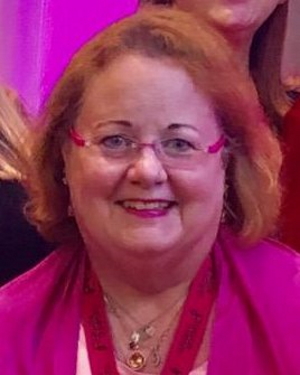 Ms. Wright is a 25 and 5 year breast cancer survivor. After being diagnosed at the age of 36 (while pregnant) with triple negative breast cancer (although it was not called such at that time), Kim quickly made the decision to make breast cancer advocacy her life’s work. She became involved with Susan G Komen on the local level, both as a volunteer and as a reviewer for the local grants. Eventually Kim’s involvement evolved into reviewing research grants for many organizations including Susan G. Komen. Kim has been a past race chair (2008/2009) for Komen Maryland. She was the Survivor chair for the Maryland Affiliate for 14 years having retired from that position, and is a past winner of the Komen Maryland Affiliate Award (2004), the highest award bestowed upon a volunteer within the affiliate. Kim is also the 2014 winner of the Komen Maryland Survivor of the Year Award and Maryland’s 2008 and 2014 representative to Team New Balance. Kim is a 1996 graduate of NBCC’s Project LEAD and has attended the San Antonio Breast Cancer Symposium three times on an Alamo Breast cancer Foundation scholarship. Kim is a Komen Scholar alumnus and a past chair of the Komen Advocates in Science Steering Committee. She continues to be an active member of Komen Advocates in Science. Kim is also the Johns Hopkins Advocate Representative to the TBCRC and the Advocate Member of the Johns Hopkins SPORE. As a breast cancer research advocate Kim has served as an advocate mentor on many scientific research grants. Most recently (2010- 2019) Kim served as a Komen Advocate Scholar. Kim is currently a member of PICORI’s RADCOMP stakeholder’s committee. All of this, in addition to holding a full time job as a Clinical Embryologist in a busy Assisted Reproductive Laboratory in the Baltimore/Washington area. 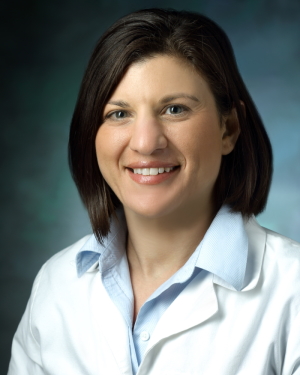 Dr. Gilkes earned her BS in Chemical Engineering and MS in Materials Science from the University of Florida. After a brief time in Industry, she pursued her PhD in Cancer Biology from the University of South Florida. Her post-doctoral fellowship was conducted at The Johns Hopkins School of Medicine where she was mentored by Nobel Laureate, Gregg Semenza, MD, PhD.  She is currently an Assistant Professor of Oncology at The Johns Hopkins University School of Medicine in the Department of Oncology with a courtesy appointment in the Department of Chemical and Biomolecular Engineering. The overall objective of her laboratory is to identify biomarkers and therapeutic strategies that focus on prolonging survival and preventing and treating metastasis for breast cancer patients. Her work has focused on the role of hypoxia and hypoxia-inducible factors (HIF) in promoting breast cancer metastasis by promoting changes in the structure and composition of the extracellular matrix mainly through collagen matrix modifications. Dr. Gilkes has identified many HIF-inducible target genes that are required for the metastasis in animal models. Her current work attempts to determine whether hypoxia-inducible genes are transiently expressed and serve to initiate the metastatic cascade or whether they chronically contribute to the metastatic process. To this end, her lab has developed a many models including a transgenic mouse model to fate map cells allowing hypoxic cells to be tracked to distant organs. 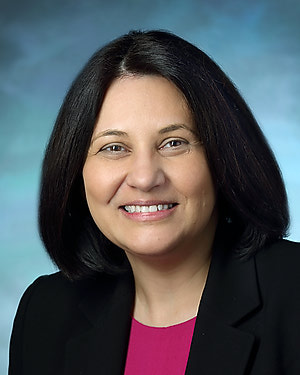 Dr. Vered Stearns completed a BS equivalent at the Tel Aviv University, Sackler Faculty of Medicine in 1989. After relocating to the United States, Dr. Stearns transferred to and graduated from the University of Medicine and Dentistry of New Jersey, Robert Wood Johnson Medical School in 1992. She completed a residency in Internal Medicine and a fellowship in Medical Oncology at the Georgetown University where she developed an interest in translational breast cancer research and spent two additional years as a research fellow. Dr. Stearns was a faculty member at the Lombardi Comprehensive Cancer Center and the Georgetown University, and at the University of Michigan Comprehensive Cancer Center in Ann Arbor, Michigan before joining the Sidney Kimmel Comprehensive Cancer Center at Johns Hopkins in 2002. Dr. Stearns was promoted to the position of full Professor in 2013. She has been appointed as co-Director of the Breast Cancer Program in 2010, and co-Director of the Breast and Ovarian Cancer Program in 2014. In 2019, she transitioned to the position of Director, Women’s Malignancies Disease Group at the Kimmel Cancer Center at Johns Hopkins. In 2018 she became the inaugural Medical Director of the Under Armour Breast Health Innovation Center.

Dr. Stearns’s long-term research goal is to improve current therapies by individualizing strategies for the treatment and prevention of breast cancer. Her main research includes utilization of biomarkers to predict response to standard regimens used to treat and prevent breast cancer and to introduce new interventions. Dr. Stearns and colleagues from the Consortium On Breast Cancer Pharamcogenomics (COBRA) Group were the first to evaluate the role of genetic variants in candidate genes such as CYP2D6 in tamoxifen metabolism, safety, and efficacy. The work has been extended to evaluate the role of genetic variants in aromatase inhibitor associated outcomes. She has also conducted clinical investigations of epigenetic modifying agents across the breast cancer continuum. Dr. Stearns has received numerous grants and awards to fund her innovative research. Her work has been presented in key national meetings, and has been published in high-impact peer-reviewed journals. Her work has already had a positive impact on the lives of many women. Indeed, in 2017, Dr. Stearns was selected by Forbes as one of 27 top breast cancer oncologists in the United States. 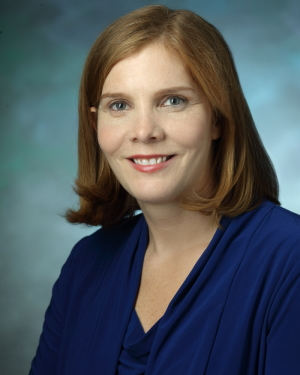 Elissa Thorner was a two-time breast cancer survivor by the age of 25. She has become an advocate for patients living with this disease appearing in television interviews, newspapers, magazines, podcasts, and radio speaking out about the barriers and challenges they often face including survivorship in early and advanced breast cancer care, long-term side effects, patient/caregiver/provider communication, improvements in quality and outcomes of care, technology as a communication tool, the mind/body connection, and healthy living after breast cancer.  Ms. Thorner is involved in several communication and research initiatives including national guideline development, grant reviews, survivorship care planning, health education for patients and providers, caregiver communication, and improvement of health outcomes. She has an undergraduate degree from Georgetown University in Women’s Health and a graduate degree from the Johns Hopkins School of Public Health in Health Education and Communication. Ms. Thorner oversees the day-to day operations of the Johns Hopkins Breast Cancer Research Advocacy Program, is a co-investigator on several research and program grants, manages the Breast Cancer Survivorship Program and is co-directs the Young Women with Breast Cancer Program.