Save the date for the 13th Annual Levi Watkins, Jr., M.D., Lectureship on Thursday, July 28. This year, the Lectureship will be integrated into the Johns Hopkins C.A.R.E.S. Symposium (Career, Academic, and Research Experiences for Students) from 11:00 a.m. until 2:00 p.m.. More details on the event to follow. To learn more, visit Hopkins Cares.

Every year, over 300 students are welcomed to the Johns Hopkins Bayview campus for the Summer Scholars Program, a partnership among the National Institute on Aging, National Institute on Drug Abuse and Johns Hopkins University School of Medicine. Researchers and faculty from these programs recruit underrepresented minority students and those from underprivileged backgrounds with the goal of increasing diversity in academic medicine and science. To celebrate these students, Johns Hopkins Bayview hosts an annual lectureship, named in honor of Levi Watkins Jr., M.D., a leader in the field of cardiothoracic surgery who worked to enhance the culture of diversity and inclusion at Johns Hopkins.

In 2016, this celebration was renamed in honor of the late Levi Watkins, Jr., M.D., a pioneer in both cardiac surgery and civil rights. Dr. Watkins’ niece, Crystal C. Watkins, M.D., Ph.D., director of the Memory Clinic in the Neuropsychiatry Program at Sheppard Pratt, and assistant professor of psychiatry and behavioral science at The Johns Hopkins University School of Medicine, inspired students with the inaugural keynote address. 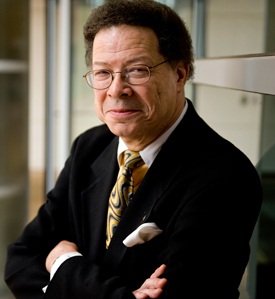 Dr. Levi Watkins is a fitting namesake for the Summer Scholars Lectureship. After joining the Johns Hopkins University School of Medicine in 1971, Dr. Watkins charted a career of historic firsts. In 1980, he performed the world’s first implantation of an automatic heart defibrillator in a human. In cardiac surgery, he became the first black chief resident at The Johns Hopkins Hospital, and later the first African-American full professor. He was a tireless advocate for fairness and diversity, spearheading a drive to recruit minorities to Hopkins and establishing the annual Martin Luther King Jr. Commemoration.