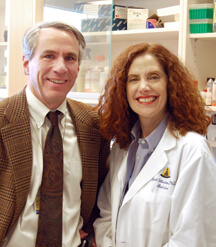 Medicine, on the prospects of a cure for HIV infection:

It seems as though the word cure was once a forbidden term among AIDS researchers. Is that changing?

ROBERT SILICIANO: For a long time scientists were cautious about referring to a cure. The possibility just seemed so out of reach. But people are talking about it more now than they used to. Several drug companies are shifting away from developing new HIV drugs to pursuing strategies for using existing drugs to eradicate the virus. And the NIH is interested: It has put out calls for grant proposals that deal with HIV eradication.

What accounts for this change?

JANET SILICIANO: Several new developments, including our primary cell model of HIV latency, which can be used to learn more about the mechanisms that maintain HIV latency. As with any disease, if you understand the mechanisms, you can begin to work on drug design. There's been lots of other great research that makes scientists in this field hopeful.

JANET SILICIANO: I recently chaired a workshop at a conference on HIV biology that focused on curing HIV. One of the talks was by a speaker who described what appears to be the first documented case of a patient cured of HIV-1 infection. The patient was infected with HIV-1 for at least 10 years and was on highly active antiretroviral therapy. He had recently been diagnosed with acute myeloid leukemia. The patient received an allogeneic bone marrow transplant from a donor who had a special genetic mutation that imparts resistance to HIV. The transplant appears to have cured the patient of both leukemia (he is now in remission) and HIV-1.

What this patient went through is not going to be possible on a large scale. The number of donors with the mutation is very, very small. At Hopkins, we're going to start to investigate the possibility of bone marrow transplants in patients with HIV.

So what do you personally believe are the prospects for a cure?

JANET SILICIANO: I do not know when or if we will have a cure. However, now we have new exciting avenues to follow in our research.

ROBERT SILICIANO: Honestly, I don't know whether a cure is possible, but I think we have to try.