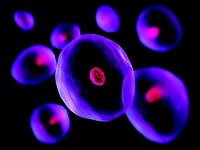 Our researchers are studying many aspects of cancer, including assessing the risk of getting cancer, preventing it, understanding how it develops and treating it.

Cancer is a class of disorders characterized by uncontrolled division of cells and the ability of these cells to invade other tissues, either by direct growth into adjacent tissue through invasion or by implantation into distant sites by metastasis.

Some cancers arise from spontaneous mutations in a cell’s genetic material, while other cancers can be passed from one generation to the next. Mutations can be caused by exposure to radiation, such as UV rays from sunlight, or chemicals or physical agents called carcinogens.

The transformation of a normal cell into a cancerous cell often requires several mutations. Generally, cells contain specific enzymes that are quite efficient at finding and correcting mutations. However, some mutations do escape detection.

Carol Greider and colleagues in Molecular Biology and Genetics have shown that inhibiting an enzyme, known as telomerase, can stop the growth of cancer cells.

Cancer can affect people at all ages, but risk tends to increase with age. Each time a cell divides its chromosome ends—called telomeres--become shorter. Cells generally stop dividing before telomeres become too short because short telomeres lead to damaged chromosomes. An enzyme called telomerase lengthens telomeres and therefore allows cells to divide indefinitely. More than 90 percent of human cancer cells have telomerase activity.

Using mice engineered to lack telomerase, Greider’s research team has shown that under some circumstances tumor formation is reduced in the absence of telomerase. They continue to study telomerase and its control. Curbing telomerase may be one approach to curbing cancer progression.

Jun Liu and colleagues in Pharmacology and Molecular Sciences are developing new small molecule tools to probe the vulnerability of cancer cells and to discover novel drugs against cancer.

To accelerate the bench-to-bedside translation of new discoveries, the Liu group and others assembled a large collection of most known drugs approved by the U.S. Food and Drug Administration and its foreign counterparts over decades and established what is known as the Johns Hopkins Drug Library (JHDL). The JHDL has been used to discover new and unexpected anti-cancer and anti-angiogenic activity among existing drugs.

Taking a cue from nature, the Liu group has also developed a novel class of large, cyclic molecules known as hybrid macrocycles, called rapafucins that are modeled after the anti-cancer and immunosuppressive drugs rapamycin and FK506. The Liu group has made a 45,000-compound rapafucin library and discovered promising leads against cancer drug targets that were deemed undruggable or difficult to drug. The rapafucins are emerging as a novel structural class of small molecules for discovering new anti-cancer drugs.