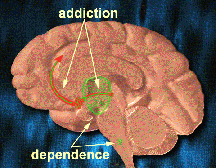 IBBS researchers are studying how chronic drug use causes lasting changes in the brain that can lead to addiction. Their findings may aid in the development of more effective treatments for addiction.

Current addiction treatments use a combination of counseling and complete abstinence, slow weaning, or drug replacement that either substitutes for the drug or blocks withdrawal symptoms. Although these therapies control physical cravings, they don’t seem to reverse the lasting changes in the brain caused by drug abuse, and therefore may only provide a temporary fix.

During learning and memory formation, the brain’s neurons create new connections to strengthen or weaken communication routes between neighboring neurons. Similarly, chronic drug use modifies neuron connections, leading to permanent alterations in the brain’s circuitry. Taking drugs creates memories of objects, places or people that users associate with doing drugs, which triggers cravings and drug-seeking behavior when the user re-encounters those situations. Several IBBS neuroscientists study these molecular changes as they occur during learning, memory and chronic drug use.

Jay Baraban of the Solomon H. Snyder Department of Neuroscience studies how exposure to drugs such as cocaine or morphine triggers long-term adaptations in the brain that underlie addiction. Persistent changes in the strength of nerve connections encode memory and drug cravings. These adaptations are mediated by rapid synthesis of plasticity proteins that modify the strength of nerve connections. Baraban and colleagues have identified a pair of proteins that play a key role in driving rapid synthesis of synaptic proteins that change the efficacy of neuronal contacts and encode long-term memory. These researchers have engineered mice that lack these proteins in selected neuronal populations and are using these valuable tools to learn more about how this novel signaling pathway contributes to drug addiction.

Paul Worley, also from the neuroscience department, studies the molecular basis of specific forms of long-term learning and memory. His laboratory focuses on a class of proteins found at the interface between connecting neurons—synapses—that ramp up as the neurons engage in information processing and storage. These proteins directly modify the strength of the signals sent between neurons and are essential for information storage. Recent work reveals how molecules that regulate neuronal responses that signal reward, such as dopamine, can selectively strengthen communication across synapses, and implicates this process in addiction.

Mollie Meffert, a faculty member in the Department of Biological Chemistry and in the neuroscience department, investigates the formation of lasting memories. She focuses on growth factors in the hippocampus that turn on or off the particular genes involved in the growth of neurons and in establishing memories. Levels of these growth factors elevate during activity in the normal brain, and mice with lower-than-usual levels perform poorly on spatial memory tests such as navigating mazes. In addiction studies, researchers showed chronic drug use causes the release of brain-derived growth factors in rat brain areas involved in sensing the drug-associated “reward.” Meffert’s group studies how the brain-derived growth factors turn genes on or off to control long-lasting brain responses, such as those occurring in learning and memory, or addiction.  By investigating the regulation of these genes in healthy and diseased neurons, the Meffert lab uncovered the mechanism by which brain-derived growth factors rapidly and specifically alter these genes. These findings may one day help us understand and develop therapeutic targets for failures in memory and brain processing as they pertain to addiction.