The Genetic Link to Parkinson's Disease

If you have family members with Parkinson’s disease, or if you yourself have the disease and are concerned about your children’s chances of developing it, you’ve probably already wondered: Is there a gene that causes Parkinson’s disease? How direct is the link?

About 15 percent of people with Parkinson’s disease have a family history of the condition, and family-linked cases can result from genetic mutations in a group of genes — LRRK2, PARK2, PARK7, PINK1 or the SNCA gene (see below). However, the interaction between genetic changes, or mutations, and an individual’s risk of developing the disease is not fully understood, says Ted Dawson, M.D., Ph.D., director of the Institute for Cell Engineering at Johns Hopkins.

Here’s what you need to know:

There’s a long list of genes known to contribute to Parkinson’s, and there may be many more yet to be discovered. Here are some of the main players:

PARK7: Mutations in this gene cause a rare form of early-onset Parkinson’s disease. The PARK7 gene makes the protein DJ-1, which protects against mitochondrial stress.

PINK1: The protein made by PINK1 is a protein kinase that protects mitochondria (structures inside cells) from stress. PINK1 mutations occur in early-onset Parkinson’s disease.

LRRK2: The protein made by LRRK2 is also a protein kinase. Mutations in the LRRK2 gene have been linked to late-onset Parkinson’s disease.

Among inherited cases of Parkinson’s, the inheritance patterns differ depending on the genes involved. If the LRRK2 or SNCA genes are involved, Parkinson’s is likely inherited from just one parent. That’s called an autosomal dominant pattern, which is when you only need one copy of a gene to be altered for the disorder to happen.

If the PARK2, PARK7 or PINK1 gene is involved, it’s typically in an autosomal recessive pattern, which is when you need two copies of the gene altered for the disorder to happen. That means that two copies of the gene in each cell have been altered. Both parents passed on the altered gene but may not have had any signs of Parkinson’s disease themselves. 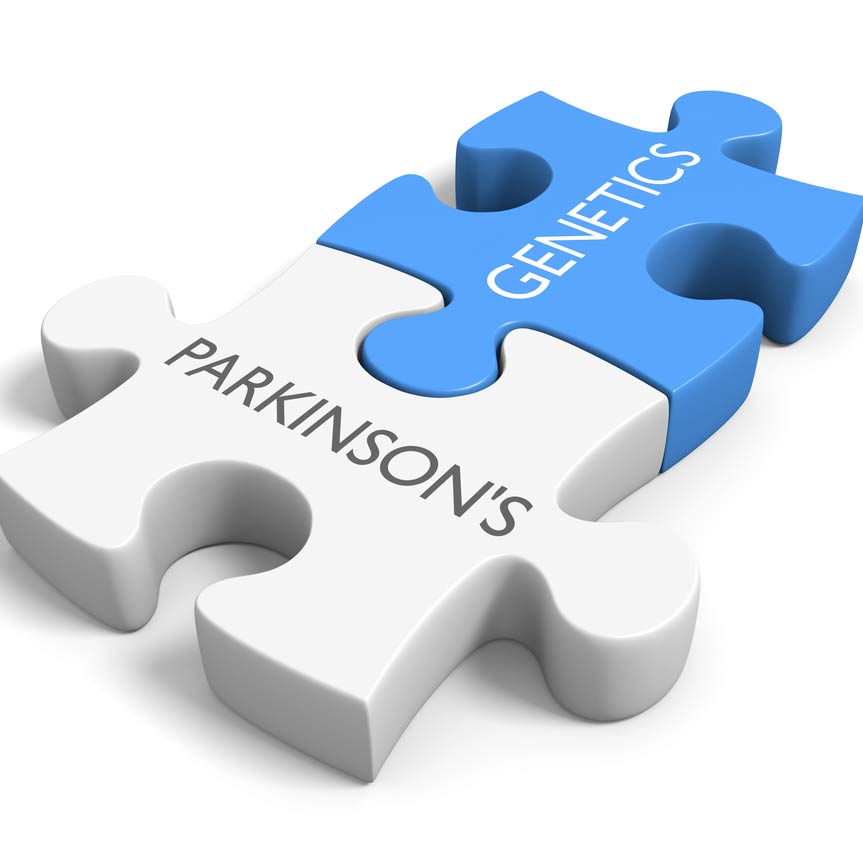 Research into Genes and Parkinson’s

“Our major effort now is understanding how mutations in these genes cause Parkinson’s disease,” says Dawson. SNCA, the gene responsible for making the protein that “clumps” in the brain and triggers symptoms, is particularly interesting.

“Our research is trying to understand how alpha-synuclein works, how it travels through the brain,” says Dawson. “The latest theory is that it transfers from cell to cell, and our work supports that idea. We’ve identified a protein that lets clumps of alpha-synuclein into cells, and we hope a therapy can be developed that interferes with that process.”