Siblings were accessed from patients, each hospitalized at any of 10 hospitals in Baltimore. All probands had a documented CAD event prior to 60 years of age. Probands were not eligible if they had CAD associated with calcific aortic stenosis, chronic glucocorticosteroid therapy, had CAD only following organ transplantation or post chest radiation, had an autoimmune disease like systemic lupus, or if their MI was cocaine-induced.

Of all probands, 24% had an MI as their index event, 65% had a PCI and/or CABG, 8.4% had angina with angiography documented CAD and were treated medically, 1.7% had sudden cardiac death, and 1.7% had angiographic documented coronary stenoses with an abnormal exercise test and no symptoms. For 65% of cases, this was not their first CAD event.  No phenotyping was performed on probands and only 40% had  DNA  samples were preserved. Only medical record data is available.

All siblings were recruited from the probands described. Among the 1656 apparently healthy siblings accessed from 1983 to 2007, baseline risk factors were characterized extensively within 1-2 months of the index event, and exercise testing with SPECT imaging was performed to determine the presence or absence of occult ischemia. Subsequently additional phenotyping has been performed.  Approximately 90% of eligible siblings who were phenotyped have been fully genotyped on the Illumina 1M platform with imputations to 2.5 million single nucleotide polymorphisms.

Siblings were excluded at baseline if they :

Siblings have been followed at 5, 10, 15, 20, and 25 years and cardiovascular and related events have been documented with medical, hospital, or death records.

Participation rates have been consistently > 92% and siblings are located throughout the United States and in several countries abroad.

All offspring of all probands and all siblings of probands 21 years of age and older were recruited between 2003-2007 and phenotyped for the same variables as the original sibling sibling population. All offspring have been fully genotyped on the Illumina 1M platform with imputations to 2.5 million single nucleotide polymorphisms.

Offspring were excluded if they:

Offspring have been followed at 5 years and cardiovascular and related events have been documented with medical, hospital, or death records. Offspring are located throughout the United States, and approximately 65% of all known offspring were recruited.

At the time of enrollment of offspring, the coparent of the offspring of any eligible participating sibling, as well as the original proband's offspring were recruited to allow examination where possible of parent/sibling trios. Co-parents have been phenotyped for biomarkers of inflammation, lipid and lipoprotein concentrations, and for platelet and thrombosis factors. They do not have occult cardiovascular disease phenotyping and are not followed routinely for events. Their contribution is largely to the genetic studies. They have all been fully genotyped on the Illumina 1M platform with imputations to 2.5 million single nucleotide polymorphisms.

Characteristics of the Overall Sample with Genotyping

* Because coparents were enrolled later, the upper age of the baseline entry exceeds 59 years overall. A larger number is available who have phenotyping only. All participants have DNA and plasma samples preserved. 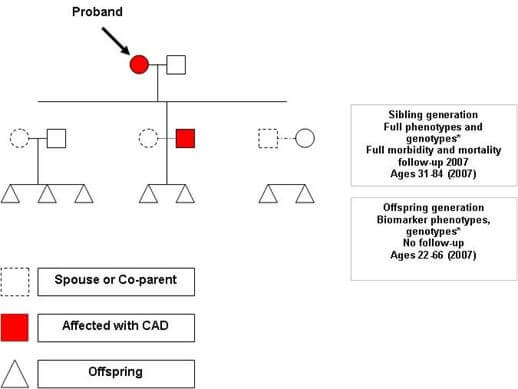