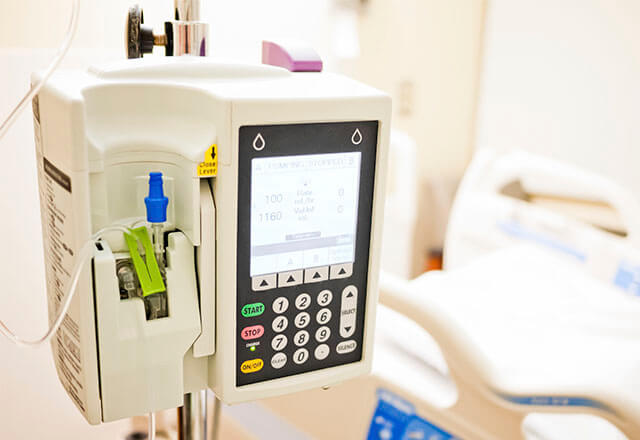 Modern infusion pumps are sophisticated but they are not integrated with other health information technologies.

Medication infusion pumps have transformed health care with their ability to deliver intravenous fluids in a controlled, precise manner. Today, about 90 percent of hospitalized patients receive medications and nutrients via infusion pumps.

However, these sophisticated devices are frequently involved in patient harm. Between 2005 and 2009 there were 87 recalls of infusion pumps, according to the United States Food and Drug Administration. The complexity of the pumps led to 56,000 adverse drug events—some of them harmful or fatal—over that time period, the FDA found. These events result not only from device malfunctions but are also due to confusing user interfaces and flawed designs.

In April 2011, a multidisciplinary team from Johns Hopkins, led by the Armstrong Institute and the Applied Physics Laboratory (APL), received funding from the Agency for Healthcare Research and Quality to design and evaluate a prototype for an infusion pump that aimed to reduce these risks. The project team, including systems engineers, human factors engineers, clinicians, software developers and project analysts, completed its work in late 2014.

Investigators used a systems engineering approach that began by seeking to understand the needs of infusion pump users and of other stakeholders. About 40 participants—including nurses, physicians, engineers, manufacturers and regulators—identified five categories of needs at a summit hosted by APL in January 2012.

The team created a prototype for an infusion pump interface that is integrated with other hospital information technology systems to meet many of the needs identified by users. In this system, nurses do not need to manually enter information such as drug name and rate of infusion from another computer screen—steps in which programming errors can occur. They can select an auto-programming mode in which drug orders are pushed to the pump interface from the electronic Medication Administration Record. After using a barcode reader to identify herself and the patient, the nurse selects the drug order from the pump interface. Next, the nurse scans the IV bag, infusion route and pump channel, as the pump confirms that they match what was ordered. The goal is to ensure that the right patient receives the right medication at the right dose, volume, and concentration, via the right route. A manual programming mode was also developed to allow an evaluation of both modes in a simulated hospital environment.

Other features of the prototype that support patient safety and usability include:

Participants reported that display in both modes was easy to read and navigate.

Members of academia, business and industry who wish to evaluate or further develop this infusion pump prototype user interface are encouraged to request the software source code via the Office of Technology Transfer of the Johns Hopkins Applied Physics Laboratory. The OTT operates as a single point-of-contact to identify available technologies and research capabilities at the Laboratory and to secure both licensing and industry Research & Development agreements. Contact the office at 443-778-3541, techtransfer@jhuapl.edu, or http://www.jhuapl.edu.