In the early 1900s, a patient coming to Wilmer would see a single doctor: William Holland Wilmer, M.D., a world-renowned ophthalmologist who practiced in Washington, D.C. Today, Wilmer patients can visit one of nine clinics to see one of more than 100 highly qualified ophthalmologists.

The seeds for that transformation were first sown in 1922 with the vision of Aida de Acosta Root Breckinridge. While convalescing from a successful surgery performed by Wilmer, she conceived a plan to create an institute that would give him the resources to both treat patients and preserve his knowledge to pass down to future generations.

The Wilmer Eye Institute opened in Baltimore several years later. At its formal dedication in 1929, George E. Vincent, president of the Rockefeller Foundation, noted, “This clinic … will carry on into the long future not only [Wilmer’s] name, but … something of his insight, skill and sympathy to inform and inspire generations of investigators and physicians.”

“This year, we had over 450 applicants for five spots,” says Fasika Woreta, M.D., M.P.H., who runs the residency program and was herself a Wilmer resident from 2008–2011 and chief resident (also referred to assistant chief of service) from 2013–2014, before she joined the faculty as an assistant professor of ophthalmology.

Wilmer’s selection committee members clearly have their pick of qualified candidates. But they are looking for more than exceptional students. “What we look for is to train the future leaders in ophthalmology. Our residents go on to become program chairs, program directors, innovators and leaders in national and international organizations,” says Woreta.

“There are very few places in the country that have a resident-run clinic where the resident is the provider, so when patients come in, they are here to see specifically you,” says Viruni.

Viruni is referring to what was long known as the General Eye Services and more recently has been renamed the Patient Access Center for the Eye, or PACE. In operation since 1925, the clinic is where Wilmer residents do much of their training. Patients from around the East Baltimore community and beyond come to PACE for a full range of ophthalmology services. The center also offers same-day appointments for those who require urgent care.

While residents see their own patients, they are supervised by Wilmer faculty members as well as by their chief resident, a fellowship-trained faculty member and former Wilmer resident who dedicates one year to teaching residents, taking care of patients in PACE and performing emergency surgeries for patients with eye injuries. Residents follow their own patients through their entire three-year residency. “You see different diseases —sometimes very advanced diseases — and you learn to diagnose, manage and follow them through time. They’re your patients, so you take responsibility for making sure they get the care they need,” says Viruni.

Mentorship comes not just from senior faculty members, but even from those just a year ahead of them in the residency program — sometimes especially from them. “The first-years work closely with our second- and third-years in the Emergency Department, clinic and operating room,” says Woreta. “We want to encourage our residents to be outstanding teachers. In medicine, passing knowledge and experiences that you have learned along the way to the next generation is critical.”

Woreta says she selected Wilmer as her first-choice residency program because of the support for education she witnessed at the institute while she was a student at the Johns Hopkins University School of Medicine, particularly from Neil Miller, M.D. A world-renowned neuroophthalmology specialist and Wilmer’s Frank B. Walsh Professor of Neuro-Ophthalmology, Miller was both a resident and chief resident at Wilmer in the 1970s, after which he joined the faculty and ran the resident selection committee for two decades. Although he stepped down from that position two years ago, Miller remains an ardent advocate for academic medicine — both for residents and for those who teach them.

Acknowledging that research and patient care are important elements of academic medicine’s mission, Miller notes that teaching is equally crucial. “We’re the ones who make sure that the specialty moves on in, hopefully, the highest plane. And that’s a tremendous responsibility,” he says.

One reason Wilmer faculty members and residents can advance the field of ophthalmology lies in the training facilities at the institute — both the PACE clinic and the Center of Excellence for Ophthalmic Surgical Education and Training (OphSET).

OphSET houses a six-station, state-of the- art wet lab facility with an additional instructor station — all of which simulate operating room conditions so that trainees can experience the anatomical conditions of doing microsurgery aided by microscopes.

For Wilmer alumni who choose to give back to the institute philanthropically, OphSET is a popular beneficiary of their support because of the advances in education the center allows.

“In ophthalmology, everything’s microscopic, and there’s not much room inside the microscope for teaching,” explains Scott LaBorwit, M.D., who did a fellowship in Wilmer’s Glaucoma Division from 1998 to 1999. “OphSET has figured out a way to change that dynamic by networking the microscopes and projecting simulation surgeries on screens and expanding the opportunity for learning.” A philanthropic supporter of OphSET, he is inspired to give to Wilmer because he gained so much during his fellowship. “I’ve been trying to give back in any way I can ever since,” he says.

Another alumni supporter of OphSET, John Payne, M.D., was a resident and chief resident at Wilmer in the mid-1960s. “I’m particularly indebted to the Wilmer training that I had, which gave me a leg up when I started practice on my own. Wilmer taught me the way to do things and the way to take responsibility for people’s eye care,” says Payne.

Payne credits Wilmer’s leadership as key to its ability to attract the best faculty members and residents. For an organization that is 95 years old, Wilmer has had only six directors — allowing for a great deal of continuity. “It comes from the top. The various chairs we’ve had are so highly respected,” says Payne. “Consequently, people who are trained under them go out into the world with a sense of pride in their institution, pride in their professionalism and pride in their expertise.”

Viruni, who will return as a co-chief resident in two years, understands the value of the Wilmer legacy. “It’s really inspiring. It makes me think about what I can bring to the table. How can I contribute? Such great minds have represented Wilmer. As a generation, we have big shoes to fill,” she says. 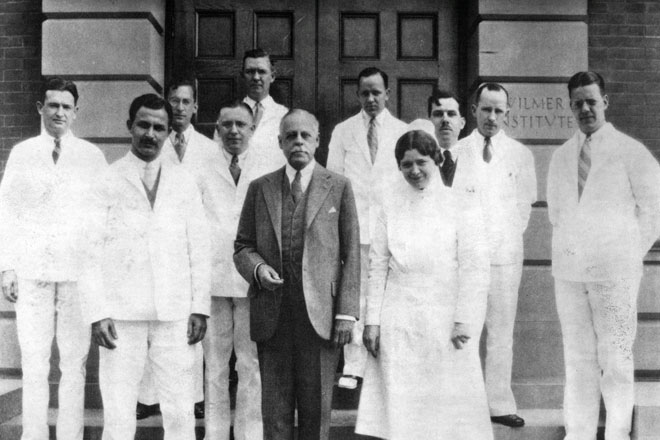