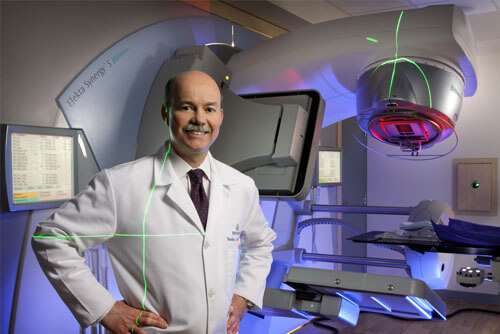 Stay Up to Date with Discovery

Researchers at the Johns Hopkins Greenberg Bladder Cancer Institute, usually in collaboration with other leading institutions, are developing and evaluating innovative approaches to the way the world diagnoses, treats and prevents bladder cancer.

After decades of lagging behind other diseases in the pace of funding and discovery, bladder cancer is finally getting the attention and research funding it deserves. The technology and science have caught up to developments that have been made for other diseases, and targets are showing encouraging results specific to bladder cancer.

We’re making progress every day, and some of our work is already having a positive impact on patients involved with clinical trials.

Get the highlights on current studies and recent developments in bladder cancer research:

Learn more about the JHGBCI in our e-newsletter. 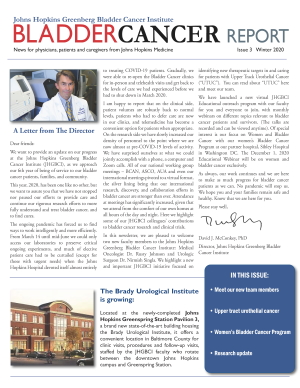 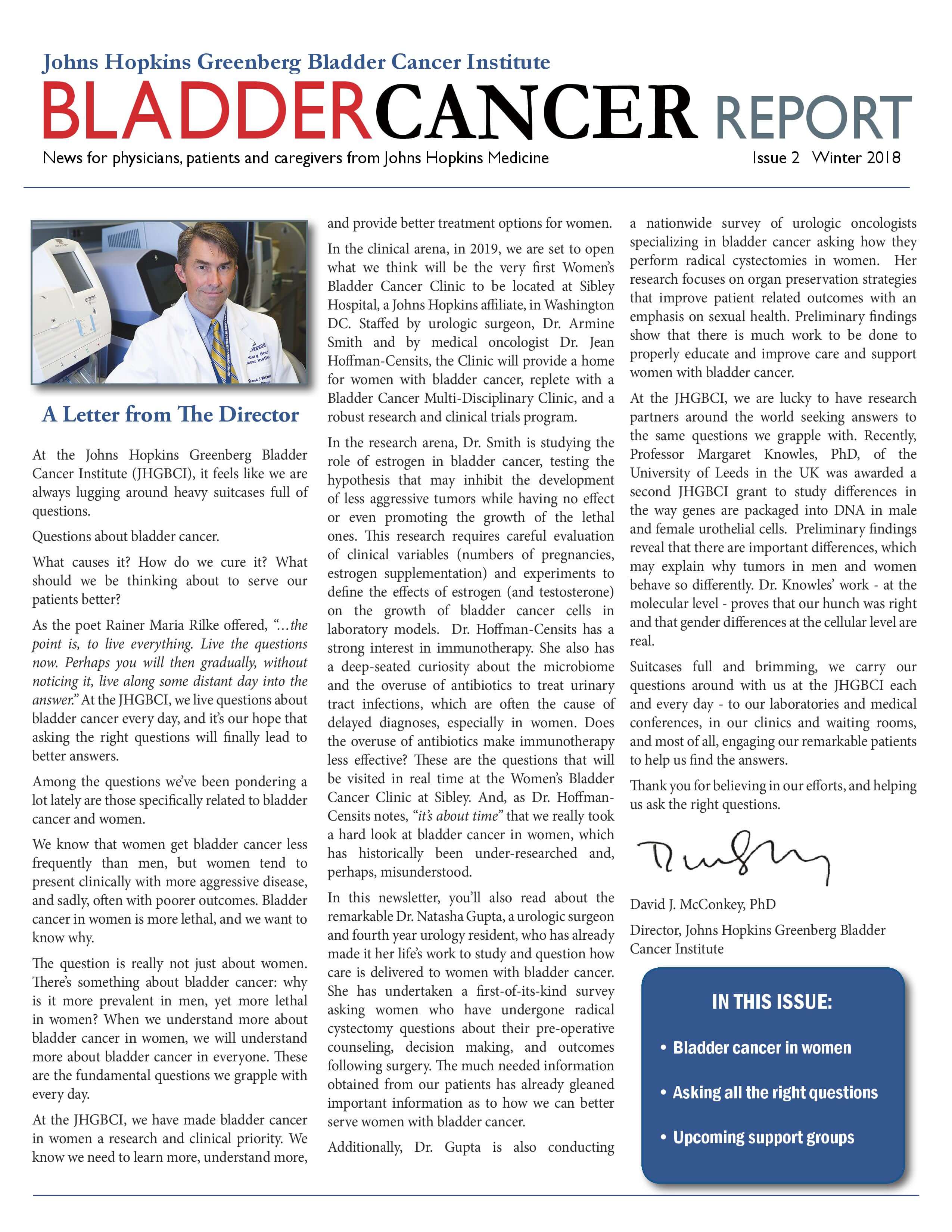 Learn how immunotherapy works from the Bloomberg~Kimmel Institute for Cancer Immunotherapy.

On the Horizon: Improved Immunotherapy for Bladder Cancer

Recent breakthrough clinical trials at a few of our partner institutions have resulted in the first new drug approved for metastatic bladder cancer in two decades and evidence that combinations of existing immune checkpoint blockades may be effective in bladder cancer. These discoveries — led by Jonathan Rosenberg, M.D., of Memorial Sloan Kettering Cancer Center; Elizabeth Plimack, M.D., of Fox Chase Cancer Center; and Padmanee Sharma, M.D, Ph.D., of the MD Anderson Cancer Center — have excited the field and set the stage for additional research.

Researchers at the Johns Hopkins Greenberg Bladder Cancer Institute are focused on working with the Bloomberg~Kimmel Institute for Cancer Immunotherapy to investigate better combinations of immunotherapies that could achieve a higher response rate for more patients and better methods to predict which bladder cancer patients are likeliest to benefit from these therapies.

The discovery that muscle-invasive bladder cancer can be grouped into at least four molecular subtypes has resulted in many research studies that seek to develop more targeted therapies and approaches, particularly around determining which patients are good candidates for chemotherapy.

Our medical oncology experts are studying biologic therapies that block cancer growth in patients who have specific genetic mutations in their cancers. Dovitinib binds to and inhibits a particular mutation, which may hinder tumor cell proliferation and induce tumor cell death.

We are also collaborating with Greenberg Institute partner Arlene Siefker-Radtke, M.D., of the MD Anderson Cancer Center, who is working with two inhibitors of the FGFR genetic mutations.

David McConkey, Ph.D., the director of the Greenberg Bladder Cancer Institute, won the 2016 Bladder Cancer Advocacy Network’s Innovation Award for his project “Targeting FGFR3 in Muscle-Invasive Bladder Cancer.” The project is a collaboration between Johns Hopkins and Arlene Siefker-Radtke, M.D., of the MD Anderson Cancer Center. It will investigate strategies for bladder cancer that is resistant to standard therapies. Learn more about the award and McConkey’s study.

Radical cystectomy is the standard treatment for muscle-invasive bladder cancer, but because this is an invasive procedure, many researchers are investigating ways to treat the disease while preserving the bladder.

A subset of patients at the Greenberg Bladder Cancer Institute may already benefit from bladder preservation, thanks to a program led by Theodore DeWeese, M.D., director of the Department of Radiation Oncology and Molecular Radiation Sciences. He identifies muscle-invasive bladder cancer patients whose individual cases may respond to trimodality therapy alone, which includes tumor resection, chemotherapy and radiation.

Urologic oncologist Noah Hahn, M.D., is working with other leaders in the bladder cancer field to investigate a treatment approach that could allow more muscle-invasive bladder cancer patients to keep their bladders. The concept also incorporates immunotherapy drugs called checkpoint inhibitors, which have been shown to be effective on some types of tumors.

The collaborative group — which includes William Shipley, M.D., and Jason Efstathiou, M.D., from Massachusetts General Hospital, as well as other members of NRG Oncology, the Eastern Cooperative Oncology Group, the Alliance for Clinical Trials in Oncology and SWOG — is developing the concept.

Johns Hopkins researchers are on the hunt for bladder cancer biomarkers that appear in urine. Such markers could potentially serve as noninvasive, DNA-based tests for early diagnosis of bladder cancer in patients at high risk for developing the disease or early recurrence among bladder cancer patients in remission. They also have the potential to help predict who will respond to therapy.

In 2013, a team led by Bert Vogelstein, M.D., Nickolas Papadopoulos, Ph.D., Luis Diaz, M.D., and Ken Kinzler, Ph.D., from the Ludwig Cancer Research Center; Georges Netto, M.D., from the Division of Urologic Pathology; and Trinity Bivalacqua, M.D., Ph.D., from the Brady Urological Institute found a high prevalence of mutations in the promoter of a gene called telomerase reverse transcriptase (TERT) in a wide range of bladder cancer precursor lesions. As part of the study, they studied the presence of TERT promoter mutations in urine samples from 14 patients who had been treated for early-stage bladder cancer. Among patients whose tumors harbored TERT promoter mutations, the same mutations were present in follow-up urine samples from seven of eight patients whose cancer recurred. The mutations were not present in follow-up urine samples from six patients whose cancer did not recur.

The work was published in the journal Cancer Research. In 2014 and 2015, a team led by Netto received grants from the Greenberg Bladder Cancer Institute to continue their work.

The Johns Hopkins Greenberg Bladder Cancer Institute is one of eight leading U.S. bladder cancer programs participating in a large-scale study launched by the Bladder Cancer Advocacy Network and its Bladder Cancer Genomics Consortium (BCGC). The study is a collaborative effort to sequence the genomic profiles of metastatic bladder cancer patients and house the information in a repository that is accessible to all partner institutions.

The data collected can be used by any partner institution or group for research into targeted genetic treatment approaches and to develop clinical trials. The consortium plans to track the results of this collaborative effort to ensure it is making a substantial, real-world impact.

Researchers at the Johns Hopkins Greenberg Bladder Cancer Institute, directed by oncology and urology surgeon Trinity Bivalacqua, M.D., Ph.D., have created a novel tube to empty urine from the body. The tube, for patients who have had their bladders removed as part of treatment for bladder cancer and other conditions, is grown from each patient’s own cells.

A few weeks before surgery, a sample of fat tissue is removed from the patient’s abdomen. Smooth muscle cells are then isolated from the sample in a lab and grown on a collagen-based scaffold. Within four weeks, a tube, called a neo-urinary conduit, is available for surgical implantation in the patient. One end of the tube is attached to the ureters, and the other is attached to a small opening in the abdomen. Urine can then flow from the body through the tube and exit the skin into a disposable bag. Following surgical implantation, the body generates nativelike urinary tissue.

This process provides an alternative to other types of conduits that typically are created from a section of a patient’s bowel, decreasing the risk of surgical complications and infection.

Read a review of the clinical trial on PubMed.​