More than 100 nurses, physicians, other clinicians and support staff cared for Gerry and Georgene Stephens, a couple hospitalized for COVID-19 at The Johns Hopkins Hospital—he for three weeks and she for two days. “I was asleep for two thirds of my stay… Yesterday, I went on a 4-mile hike,” said Gerry. Hear what else he, his wife and members of their inpatient and home care teams had to say about the challenging but successful recovery.

Like other patients with COVID-19, Gerry Stephens couldn’t have visitors during his three-week stay at The Johns Hopkins Hospital, which started March 17.

His wife of nearly 50 years, Georgene, couldn’t hold his hand as he lay in the intensive care unit, sedated and often delirious, breathing with the help of a ventilator. Their three grown children couldn’t return to their childhood home in Howard County to be with Georgene as she recovered from her own milder case of COVID-19.

Despite restrictions imposed regarding the highly infectious virus, Gerry and Georgene did not go through their illnesses alone.

Pulmonary and critical care specialist Brian Garibaldi, M.D., estimates that more than 100 doctors, nurses and other front-line staff members cared for the couple during and after their hospitalizations. That support system included a Johns Hopkins Home Care team that came to the Stephens’ home 14 times over 17 days to help Gerry regain his strength.

By mid-May, Gerry, an executive leadership coach, was working part time and walking four miles each day. “I’m most of the way back,” he says.

Once I met Dr. Garibaldi and the other staff members, I knew Gerry was in the best place.

Gerry, 69, and Georgene, 70, were the first couple to both receive treatment for COVID-19 at The Johns Hopkins Hospital. Their ordeal began in early March, when Gerry developed a cough and fever. His condition worsened, and on March 17, they went to Howard County General Hospital, where they were both tested for COVID-19.

Georgene, who was asymptomatic, was sent home. But Gerry, feverish and struggling to breath, was intubated and taken by ambulance to The Johns Hopkins Hospital, where he was treated in the hospital’s Biocontainment Unit.

The test results, which came back March 18, showed that both Gerry and Georgene had the new coronavirus. Georgene’s symptoms emerged later that week. “I started feeling lightheaded and funny,” she says, so she called 911 and was taken by ambulance to The Johns Hopkins Hospital.

Although she was treated and discharged the next day, Georgene was at the hospital long enough to get visits from Garibaldi and several nurses who were treating her husband.

“They came in and told me everything, and that made me feel better,” says Georgene. “Once I met Dr. Garibaldi and the other staff members, I knew Gerry was in the best place.”

Gerry remained in the intensive care unit (ICU) for two weeks. Heavily sedated, he had vivid hallucinations — a common experience for ICU patients.

When he was finally taken off ventilation and able to talk, Gerry wanted to call his wife. The first step was finding his cellphone, which was in his shoe. Then there was another problem, caused by the mental fog that is also common for ICU patients: “I couldn’t remember the password on my cellphone, and then I couldn’t remember my home phone number,” Gerry says. “So the nurses looked up our number and called Georgene from the hospital phone.”

The separation continued even after Gerry returned home April 8, weak and 35 pounds lighter. As a precaution to prevent transmitting other illnesses between them in their fragile states, the longtime spouses stayed apart for two weeks. They slept in separate bedrooms, used different bathrooms and did not eat together.

She also worried that she wouldn’t be able to take care of Gerry. That’s when the post-acute COVID-19 team (PACT) sprang into action. 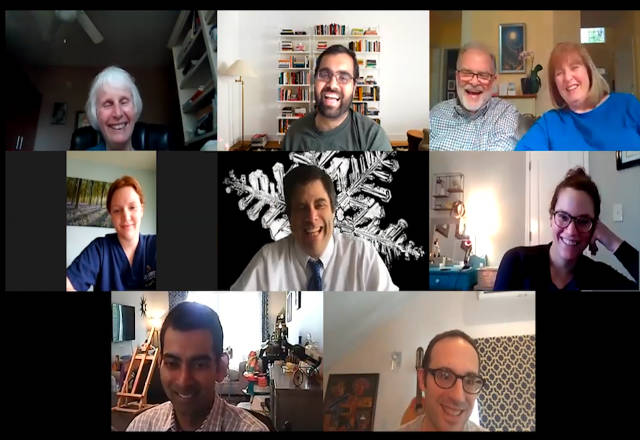 The purpose of PACT is to help people like Gerry recover from COVID-19 and combat post-intensive care syndrome, the cluster of symptoms that often follows ICU stays and can include physical weakness, cognitive impairment, anxiety, post-traumatic stress disorder and depression.

The PACT clinicians recently reunited with Gerry and Georgene on a Zoom call, along with pulmonary and critical care doctors Garibaldi and Mahendra Damarla, M.D., and hospitalist Amit Pahwa, M.D.

“I was very nervous about Gerry coming home,” Georgene told the therapists on the call. “And with you guys coming here, it was a really big help.”

Gerry praised Kelehan’s pragmatic approach, dubbing the physical therapist the “queen of incrementalism” because she urged him to add just one minute of exercise each day.

All agreed that Gerry, one of the first COVID-19 patients at The Johns Hopkins Hospital, had made an inspiring recovery, fueled by his determination to get stronger and resume his happy home and work life.

“Initially, he had a lot of anxiety, but having a purpose in life correlates with positive outcomes, and Gerry epitomizes someone with purpose,” Kaplin says.

When Gerry and Georgene were finally able to reunite, Gerry cooked a breakfast of eggs Benedict for his beloved. Because of the pandemic, the couple canceled plans for a 50th anniversary bash this summer. Instead, they’re savoring small pleasures that were impossible a short time ago.

“I enjoy eating breakfast together,” says Gerry. “I enjoy strolling up and down our street together. We’re appreciating the simple things.”