In This Section
Home > Suburban Hospital > About the Hospital

About Our History with NIH and Johns Hopkins Medicine

A Medical Partnership of National Significance 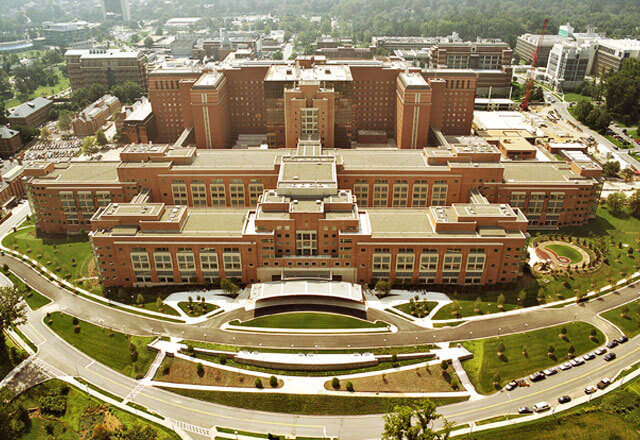 In July 1996, officials at Johns Hopkins Medicine in Baltimore, Suburban Hospital, and the National Institutes of Health, located across the street from Suburban, initiated a formal affiliation in an effort to enhance the region's healthcare services. For more than 20 years, this unique alliance has brought world-class research from the bench to the bedside, providing the local community with round-the-clock access to the most advanced diagnostic and treatment protocols for stroke and heart attack. On June 30, 2009, Suburban Hospital officially became a member of Johns Hopkins Medicine.

Suburban Hospital’s busy Emergency/Shock Trauma Center, which currently sees more than 45,000 patients a year, provides an ideal milieu in which The National Heart, Lung, and Blood Institute (NHLBI) and The National Institute of Neurological Diseases and Stroke (NINDS) can undertake community-based evaluation of the research breakthroughs that come out of their laboratories. This one-of-a-kind opportunity for translational research is made possible by Suburban Hospital’s close proximity to the NIH campus.

Cardiovascular disease, which includes heart disease and stroke, is the leading cause of death, accounting for nearly 40 percent of those who die each year. Our rapidly aging population makes it imperative that we find new ways to treat both disease processes, so that more may live longer, and live a higher quality of life.

In 1996, Suburban began performing primary acute angioplasty in its Cardiac Cath Lab as a designated facility in a Johns Hopkins cardiac clinical trial called C-PORT (Cardiovascular Patient Outcomes Research Team). The study compared the effectiveness of angioplasty with clot-dissolving drugs. Suburban was the first community hospital in Maryland authorized to perform this procedure without cardiac surgery backup. As a result of the trial, angioplasty is now standard practice for treating patients with acute myocardial infarction (heart attack) nationwide.

In 1999, Suburban Hospital and the National Institutes of Health initiated the NIH-Suburban MRI Center and a Heart and Stroke Research and Care Program. The opening of the Center, located at Suburban, marked the beginning of a unique study to evaluate the use of sophisticated magnetic resonance imaging (MRI) in diagnosing heart attack, coronary artery disease and stroke in emergency room patients. At the time the MRI Center opened, Suburban was the only community hospital, and one of fewer than 50 facilities in the world, with this level of imaging technology.

Correct diagnosis and prompt treatment are essential for the survival of heart attack patients. Yet because the science has been imprecise, many patients are prematurely released from hospitals, only to have their heart attacks at home. Scientists involved in the NIH-Suburban Cardiac Research Initiative have been using normal volunteers and chest-pain patients from Suburban’s Emergency Department to evaluate numerous methods to diagnose heart attacks faster and more accurately. The initial results suggest that MRI technology fulfills that objective, paving the way for faster treatment that could reduce or prevent permanent heart damage. The NIH-Suburban study lays the groundwork for what could be a dramatic change in how heart attacks are diagnosed and how rapidly patients receive treatment.

The MRI Center and a 24-hour, hospital-based stroke team are the main components of The NIH Stroke Center at Suburban Hospital. Leading the stroke team is Zurab Nadareishvili, MD, medical director of the Suburban Hospital Stroke Program. Other members of the team include Suburban and NIH neurologists, internists, intensive-care physicians, nurses, radiologists, MRI technologists, researchers and rehabilitation therapists. At most hospitals throughout the country, having a neurologist available within 15 minutes to treat stroke victims is unheard of. At Suburban Hospital, it’s a reality every day. While the immediate objective is to treat acute stroke patients before the damage is irreversible, the program is one element of a multi-year research project to evaluate new strategies for stroke treatment. This round-the-clock access to the most advanced medical protocols means stroke patients in Montgomery County now have a better chance for a complete recovery. And these medical breakthroughs will soon become the standard protocol for treating stroke patients nationwide.

Emergency Response for the Nation’s Capital

The new threat of domestic terrorism has challenged us to mobilize resources to treat hundreds of thousands of people who may be injured during an attack at Ground Zero – Washington, D.C. Suburban Hospital’s geographic proximity to the Nation’s Capital makes it an important player in the Montgomery County Task Force for Bioterrorism. Suburban has recently begun to collaborate with the NIH, and another neighboring medical institution, The National Naval Medical Center in Bethesda, to prepare for a worst-case scenario. In the event a terrorist attack bears down on the greater Washington, DC region, Suburban Hospital and its Emergency/Trauma Center would have a major role through the Bethesda Emergency Preparedness Partnership. Learn more about BEPP.