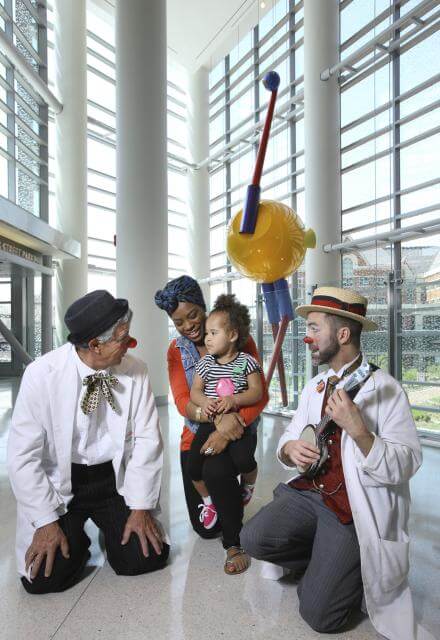 Meet the dedicated band of “doctors” who just might be looking for your funny bone.

Dr. Boots began entertaining while a student at Baltimore Polytechnic Institute. While employed at the Maryland School for the Blind he learned to perform magic for visually impaired students. His clowning experience ranges from birthday parties to corporate events. For more than 20 years he represented McDonald’s performing at special events, grand openings and school shows. He has performed for two United States presidents at the White House!  With over 40 years of experience in family entertainment, he was voted Best Children’s Entertainer by Baltimore magazine. He was chosen as resource artist for the WordBRIDGE Playwrights Laboratory for two years. Dr. Boots began performing as a hospital clown in 1998 at Children’s National, and as a supervisor at Johns Hopkins Children’s Center he was among the first six hospital clowns when the team debuted in 2001. Among his accomplishments is reciting the alphabet forward and backward!

Dr. JJ first donned a red rubber nose, floppy shoes and some greasepaint to entertain children at a social club picnic in June 1979. For more than 22 years he worked as a Baltimore City police officer investigating traffic accidents. As secondary employment, he entertained audiences with magic and ventriloquism. He was hired in 1996 as a Hospital Red Nose Doc, and since then Dr. JJ has devoted three days a week to entertaining the children, families and staff members at Children’s National in Washington, D.C., and at Johns Hopkins Children’s Center. Magic and ventriloquism are just some of the ways Dr. JJ keeps audiences laughing and amazed.

Dr. Spats began his clown training at the Ringling Bros. and Barnum & Bailey Clown College. He has performed as a hospital clown at Children's National since 1999 and at Johns Hopkins Children's Center since 2001. Additionally, he toured for six seasons with Big Apple Circus, sharing the role of Grandma the Clown with Barry Lubin. He has performed as a clown on five continents and is a co-founder of Clown Cabaret, a performance workshop/laboratory in Washington, D.C., for developing new work. In addition to his clown work, he designs, builds and performs puppets for theaters in D.C. and Maryland, where he also frequently works as an actor. He holds a bachelor’s in English from Georgetown University and a master’s in classical acting from the Shakespeare Theatre Company Academy for Classical Acting at the George Washington University.

Dr. Chucklehead is a professional entertainer with nearly 40 years of experience performing throughout the country and around the world. He has been a hospital clown for 10 years, and is the oldest and best-looking member of the team (but that’s only his opinion). Dr. Chucklehead thinks of himself as an alternative health care provider specializing in the “funny bone.” He performs magic, juggles, eats fire (not in the hospital), hits mammoth home runs for the Orioles and moonlights as an astronaut — of course, those last two are only in his dreams. He also knows “karate,” “jujitsu”, and a few other Japanese words. After almost 40 years as an entertainer, working as a Red Nose Doc at Johns Hopkins is the coolest job he’s ever had.