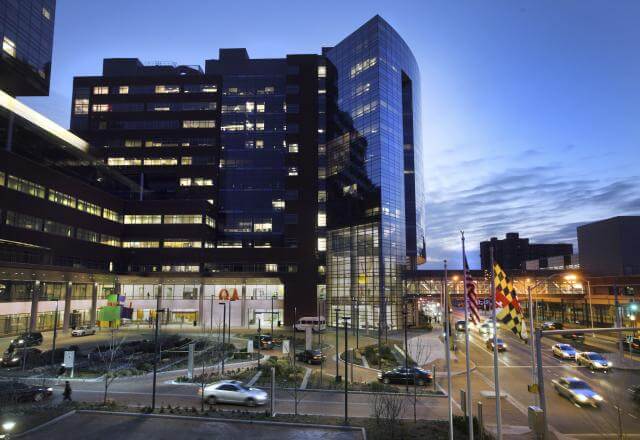 Our state-of-the-art, 209-bed Charlotte R. Bloomberg Children’s Center building, which opened in 2012, is designed to provide you and your child with the latest advances in family-centered care. From its soaring lobby, large operating rooms equipped for the most technically complex procedures imaginable, spacious patient rooms and welcoming family facilities, the new building provides a hospital experience that matches the world-class medicine it affords.

Throughout the state-of-the-art Charlotte R. Bloomberg Children's Center building you will find a number of features designed to provide you and your child with the most comfortable family-centered care possible. Our amenities include areas dedicated to entertainment, exercise and physical activity, as well as quiet contemplation and reflection. Learn more about the facilities and resources at the Johns Hopkins Children’s Center available to you, your child and your family.

Many of our patient rooms are located in the Sheikh Zayed Tower and The Charlotte R. Bloomberg Children's Center. Have a look inside these state-of-the-art buildings.

Charlotte Rubens Bloomberg was born in 1909 in Jersey City, N.J. She graduated from New York University with a B.A. in accounting in an era when it was uncommon for women to attend college. In 1934, she married William Bloomberg and in 1945 settled in the Boston suburb of Medford, where she would live in the same house for the rest of her life. Charlotte was mother to entrepreneur, philanthropist and three-term New York City Mayor Michael Bloomberg and Marjorie Tiven, former New York City Commissioner of the Mayor’s Office for International Affairs and the founder of an education nonprofit, Global Cities.

After her husband died unexpectedly, Charlotte became the family’s chief breadwinner and was a role model and source of advice and encouragement for many, especially her children and grandchildren. When her son Michael was first elected Mayor of New York City in 2001, she held the Bible on which he took the oath of office. The two spoke nearly every day and he credited both his parents for his commitment to philanthropy and public service. Charlotte served as co-president of her synagogue, Temple Shalom, into her 90s, was a regular patron and supporter of the Medford Public Library and enjoyed completing crossword puzzles and reading two daily newspapers. Mrs. Bloomberg lived to the age of 102.