Could nasal polyps be the cause of your stuffy nose?

Are you blaming your stuffy nose on seasonal allergies or a cold? If these symptoms don’t go away, they may be tied to something more serious like nasal polyps. These noncancerous growths can cause nasal congestion, runny nose, sinus pressure and other symptoms that aren’t unique to this condition. Johns Hopkins otolaryngologist Jean Kim, M.D., Ph.D., answers important questions about nasal polyps to help you understand what they are and how to get rid of them.

What are nasal polyps and where are they located?

Nasal polyps are benign (noncancerous) growths that may form inside nasal passages and sinuses — the spaces behind your nose and cheeks.

While the exact cause of nasal polyps is not yet established, they have been linked to prolonged inflammation of the lining of the nose and sinuses, also known as chronic rhinosinusitis. Rhinosinusitis can be related to many different factors from allergens to upper respiratory tract infections and even secondhand smoke. In some people, these contaminants trigger an abnormal immune response that leads to excessive swelling of the nasal lining in the form of nasal polyps.

There is no evidence that nasal polyps are life-threatening. However, they can be a big inconvenience and can interfere with the normal drainage and ventilation of your sinuses. The mucus produced by the sinuses is meant to wash away irritants and contaminants from the nasal passages. If nasal polyps get too big, they may block the normal flow of mucus and cause it to build up and become infected, further worsening your sinus issues.

Are nasal polyps more common in children or adults?

“It depends on which type of nasal polyps we are talking about,” Dr. Kim says. If the polyps are related to a sinus disease or an allergy to aspirin or ibuprofen, then they are more likely to occur in adults. On the other hand, nasal polyps associated with cystic fibrosis are more common in children.

Are some people more prone to developing nasal polyps?

Cystic fibrosis is one of the conditions that may predispose a person to developing nasal polyps. Other conditions include asthma and sensitivity to aspirin that, together with nasal polyps, form Samter’s Triad, also known as aspirin exacerbated respiratory disease. People who have Samter’s Triad suffer from severe asthma accompanied by nasal polyps. They also frequently develop an allergy-like reaction to aspirin and other nonsteroidal anti-inflammatory drugs.

What are the symptoms of nasal polyps?

At the beginning stages, nasal polyps may have no symptoms at all. As they grow bigger, you may experience a stuffy nose, cough, headaches, decreased sense of smell and taste and sinus pressure. Unfortunately, these symptoms are shared by several other conditions, such as the common cold, flu and allergies. If you do have these symptoms and they won’t go away, consult with your primary physician or otolaryngologist, also known as an ear, nose and throat (ENT) doctor.

Do nasal polyps hurt or bleed?

“If they are true benign nasal polyps, then you shouldn’t experience any pain or bleeding,” Dr. Kim says. However, there are other benign and cancerous masses that may grow in sinuses and nasal passages and disguise themselves as nasal polyps, such as an inverted papilloma or sinus cancer . If you are experiencing unexplained pain and bleeding in your nose, don’t ignore it, especially if it’s just on one side of your nose. Your ENT may need to perform a biopsy if the growth looks suspicious.

Can you see nasal polyps?

Because of the location of nasal polyps, it may be difficult to see them through the nostrils, especially if you are conducting a self-examination. Your doctor will use a special camera-equipped device called an endoscope to find out what is causing your nasal congestion and other symptoms.

What are the treatment options for nasal polyps?

Depending on the number and size of the nasal polyps, your doctor may prescribe medication, surgery or both.

Can nasal polyps come back?

Although corticosteroids and endoscopic surgery can help get rid of nasal polyps, these treatments don’t address the underlying inflammation that led to them in the first place. If the cause of the inflammation is left untreated, nasal polyps are likely to return sooner or later.

Talk to your doctor about a prevention plan to keep nasal polyps from coming back. It may include continued use of corticosteroids and nasal sprays. If the cause of your condition is environmental, increasing indoor humidity or better managing your asthma and allergies can make a big difference. 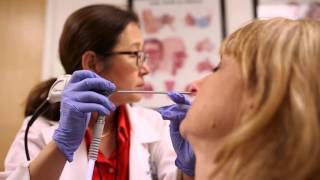