Cryoablation involves freezing the Barrett’s esophagus cells to purposefully injure them and stimulate regeneration of normal tissue. Other endoscopic treatments for Barrett’s esophagus are also offered at Johns Hopkins, including endoscopic mucosal resection, radiofrequency ablation, argon plasma coagulation (a noncontact laser) and photodynamic therapy. When you choose Johns Hopkins for your health care needs, you know you are receiving the best care from top experts in the field. 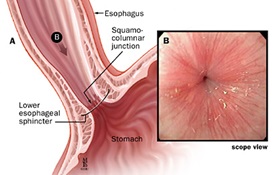 If lifestyle and dietary changes do not work, medications may be prescribed. There are two categories of medicines for reflux. One decreases the level of acid in your stomach, and one increases the level of motility (movement) in the upper gastrointestinal tract.

Over-the-counter antacids are best for intermittent and relatively infrequent symptoms of reflux. When taken frequently, antacids may worsen the problem. They leave the stomach quickly, and your stomach actually increases acid production as a result.

Prokinetic agents are drugs that enhance the activity of the smooth muscle of your gastrointestinal tract. These drugs are somewhat less effective than PPIs. These may be prescribed in combination with an acid-suppressing drug.

If you did not find relief from your symptoms from lifestyle changes or drug therapy, then you may be a candidate for surgery. Some patients prefer a surgical approach as an alternative to a lifetime of taking medications. The goal of surgery for reflux disease is to strengthen the anti-reflux barrier.

During a procedure known as a Nissen fundoplication, your surgeon wraps the upper part of your stomach around the lower esophagus. This enhances the anti-reflux barrier and can provide permanent relief for reflux. Your surgeon may perform this surgery laparoscopically, which means the procedure is less invasive and recovery is faster.

Gastroenterologists at Johns Hopkins developed the use of cryoablation therapy, an effective treatment for Barrett's esophagus.

Ablation therapy may cause Barrett's esophagus to regress. Medications will be given to suppress your stomach acid. Then, during an endoscopy, thermal injury is administered to the abnormal mucous lining.

Endoscopic surveillance is sometimes recommended. This means that you undergo periodic endoscopic examinations to evaluate whether the condition has evolved into cancer. Your doctor looks for increasing degrees of dysplasia, the abnormal growth of cells, and may perform a biopsy on the area to check for cancerous tissue.

The frequency of your evaluations will depend on the severity of the dysplasia.