Anatomy of the Adrenal Glands

An adrenal gland is made of two main parts:

The adrenal cortex and adrenal medulla are enveloped in an adipose capsule that forms a protective layer around an adrenal gland. 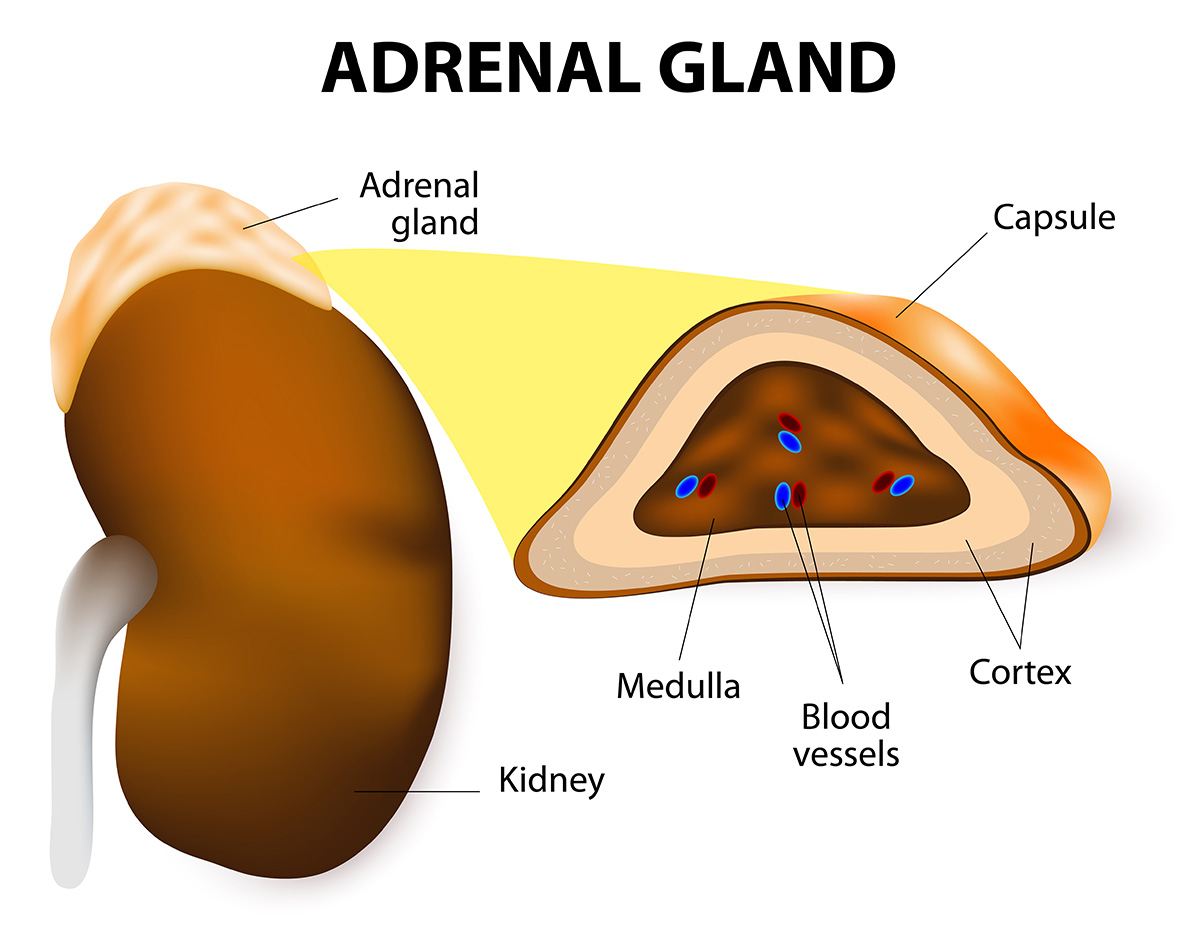 Hormones of the Adrenal Glands

Cortisol is a glucocorticoid hormone produced by the zona fasciculata that plays several important roles in the body. It helps control the body’s use of fats, proteins and carbohydrates; suppresses inflammation; regulates blood pressure; increases blood sugar; and can also decrease bone formation.

This hormone also controls the sleep/wake cycle. It is released during times of stress to help your body get an energy boost and better handle an emergency situation.

This mineralocorticoid hormone produced by the zona glomerulosa plays a central role in regulating blood pressure and certain electrolytes (sodium and potassium). Aldosterone sends signals to the kidneys, resulting in the kidneys absorbing more sodium into the bloodstream and releasing potassium into the urine. This means that aldosterone also helps regulate the blood pH by controlling the levels of electrolytes in the blood.

Among other things, these hormones are capable of increasing the heart rate and force of heart contractions, increasing blood flow to the muscles and brain, relaxing airway smooth muscles, and assisting in glucose (sugar) metabolism. They also control the squeezing of the blood vessels (vasoconstriction), helping maintain blood pressure and increasing it in response to stress.

Like several other hormones produced by the adrenal glands, epinephrine and norepinephrine are often activated in physically and emotionally stressful situations when your body needs additional resources and energy to endure unusual strain.

The causes of primary adrenal insufficiency may include autoimmune disorders, fungal and other infections, cancer (rarely), and genetic factors.

Although adrenal insufficiency usually develops over time, it can also appear suddenly as an acute adrenal failure (adrenal crisis). It has similar symptoms, but the consequences are more serious, including life-threatening shock, seizures, and coma. These may develop if the condition is left untreated.

Adrenal insufficiency can also result from a genetic disorder called congenital adrenal hyperplasia. Children who are born with this disorder are missing an essential enzyme necessary to produce cortisol, aldosterone or both. At the same time, they often experience excess of androgen, which may lead to male characteristics in girls and precocious puberty in boys.

Congenital adrenal hyperplasia can remain undiagnosed for years depending on the severity of the enzyme deficiency. In more severe cases, infants may suffer from ambiguous genitalia, dehydration, vomiting and failure to thrive.

Sometimes, adrenal glands may develop nodules that produce too much of certain hormones. Nodules 4 centimeters or larger and nodules that show certain features on imaging increase suspicion for malignancy. Both benign and cancerous nodules may produce excessive amounts of certain hormones, which is referred to as a functional nodule. Functional tumors, malignant tumors or nodules greater than 4 centimeters are recommended to be referred for surgical evaluation.

Cushing syndrome results from excessive production of cortisol from the adrenal glands. The symptoms may include weight gain and fatty deposits in certain areas of the body, such as the face, below the back of the neck called a buffalo hump and in the abdomen; thinning arms and legs; purple stretch marks on the abdomen; facial hair; fatigue; muscle weakness; easily bruised skin; high blood pressure; diabetes; and other health issues.

Excess cortisol production can also be triggered by overproduction of ACTH by a benign tumor in the pituitary gland or tumor elsewhere in the body. This is known as Cushing Disease. Another common cause of Cushing syndrome is excessive and prolonged consumption of external steroids, such as prednisone or dexamethasone, which are prescribed to treat many autoimmune or inflammatory diseases (e.g., lupus, rheumatoid arthritis, asthma, inflammatory bowel disease, multiple sclerosis, etc.)

Hyperaldosteronism results from overproduction of aldosterone from one or both adrenal glands. This is characterized by increase in blood pressure that often requires many medications to control. Some people can develop low potassium levels in the blood, which can cause muscle aches, weakness and spasms. When the cause is adrenal oversecretion, the disease is called Conn syndrome.

Excess of Adrenaline or Noradrenaline: Pheochromocytoma

Pheochromocytomas may cause persistent or sporadic high blood pressure that may be difficult to control with regular medications. Other symptoms include headaches, sweating, tremors, anxiety and rapid heartbeat. Some people are genetically predisposed to developing this type of tumor.

Malignant adrenal tumors (adrenal cancer), such as adrenocortical carcinoma, are rare and often have spread to other organs and tissues by the time they are diagnosed. These tumors tend to grow fairly large and can reach several inches in diameter.

Cancerous adrenal tumors can be functional and release excess of one or more hormones accompanied by corresponding symptoms, as listed above. Patients may also experience abdominal pain, flank pain or a feeling of abdominal fullness, especially when the adrenal tumor gets very large.

Not all cancers found in adrenal glands originate from the gland itself. The majority of adrenal tumors are metastasis, or cancer spread, from another primary tumor elsewhere in the body.

The Johns Hopkins Comprehensive Adrenal Center is a multidisciplinary center which consists of specialists across different disciplines, each providing advanced treatments for all adrenal conditions.