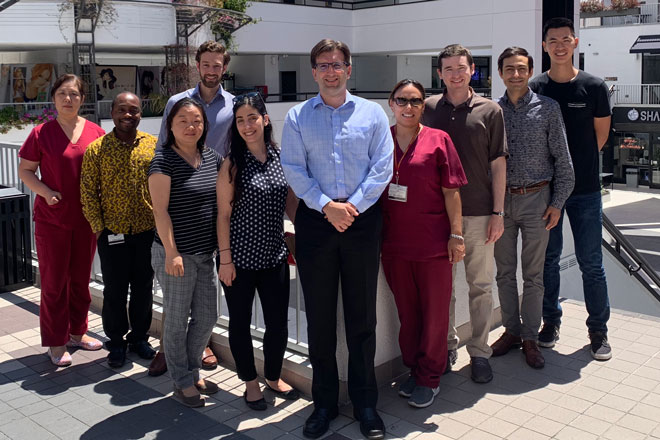 Retinal vascular diseases are among the leading cause of vision loss in the working age and older population. Over decades of life, diseases such as diabetic retinopathy and age-related macular degeneration can lead to dysfunction and abnormal growth of blood vessels. The earliest pathologic changes in these diseases occur at the level capillaries within and around the retina, but they are undetectable to the naked eye or to the doctor in the clinic until significant damage has been done.

Dr. Amir Kashani is developing novel diagnostic and therapeutic methods to diagnose and treat retinal diseases using advanced imaging methods that can detect the earliest changes in retinal capillaries before they are noticeable to the patient or doctor. For example, his research has demonstrated that impairment in retinal capillary blood flow is diffusely present and detectable in patients with the earliest stages of diabetic retinopathy. These changes are not only present in diabetes, but also in many systemic vascular diseases that impair blood vessel function such as hypertension, heart disease and cerebrovascular disease. Accurately detecting and quantifying these early capillary level changes would provide novel diagnostic tools for understanding the disease process, detecting disease progression and enabling development of targeted treatments. 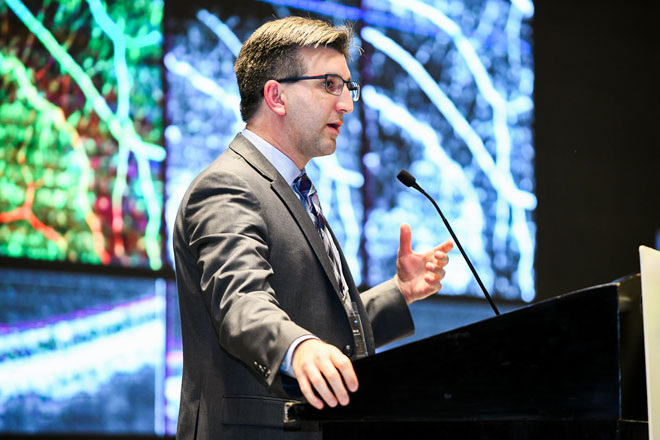 Dr. Kashani’s research has been recognized nationally and internationally. He is the lead investigator of the Optical Coherence Tomography Angiography initiative in the MarkVCID multicenter study funded by the National Institutes of Health and the Brightfocus Foundation. This five-year study aims to develop a clinically useful biomarker of retinal capillary changes to monitor the development of a prevalent form of cerebrovascular disease called vascular cognitive impairment and dementia. This is one of the leading causes of cognitive impairment, on par with Alzheimer’s disease.

Dr. Kashani is also the principal investigator for a first-in-man phase 1/2a clinical trial to test a novel stem cell therapy for severe vision loss from advanced dry age-related macular degeneration. For this study Dr. Kashani and the research team pioneered a novel surgical procedure to insert a sheet of cells underneath the damaged retina of 15 patients with geographic atrophy.

This was the first study demonstrating retinal capillary blood flow abnormalities in asymptomatic human subjects with genetic mutations predisposing to an inherited form of Alzheimer's Disease. This was a  pivotal study demonstrating that a broad spectrum of retinal vascular changes in subjects with diabetic retinopathy are detectable with Optical Coherence Tomography Angiography (OCTA). This study was also the first to demonstrate non-vascular flow signal from pockets of intraretinal fluid associated with lipoproteinaceous material and later characterized as a novel clinical finding, suspended scattering particles in motion (SSPiM), by our group in Kashani AH et al., Ophthalmology Retina 2018. This was a pivotal first-in-human phase 1/2a clinical trial testing the safety and efficacy of a novel stem cell-derived biosynthetic implant and surgical procedure for the treatment of severe vision loss from subjects with advanced dry age-related macular degeneration with geographic atrophy.  This novel surgical procedure was further described by Dr. Kashani in several publications below.

Our Research in the Media

3D Animation of OCT and OCTA from a Human Subject

The animation illustrates the 3D structure of the retinal vasculature and our ability to classify vessels based on size and shape using novel 3D analysis methods developed by our group. Animation by Amir Kashani and USC Laboratory of Neuroimaging.

3D Animation of OCTA from a Human Subject with Macular Edema

The animation illustrates the 3D structure of the retinal vasculature in relation to areas of intraretinal fluid. Animation by Amir Kashani and USC Laboratory of Neuroimaging. State-of-the-art widefield Optical Coherence Tomography Angiography (OCTA) image of a subject with nonproliferative diabetic retinopathy demonstrating areas of impaired perfusion in the peripheral retina and microaneurysms.  Dr. Kashani’s research group is a leader in the application of OCTA to detect retinal vascular changes in a wide-range of ocular and systemic diseases. 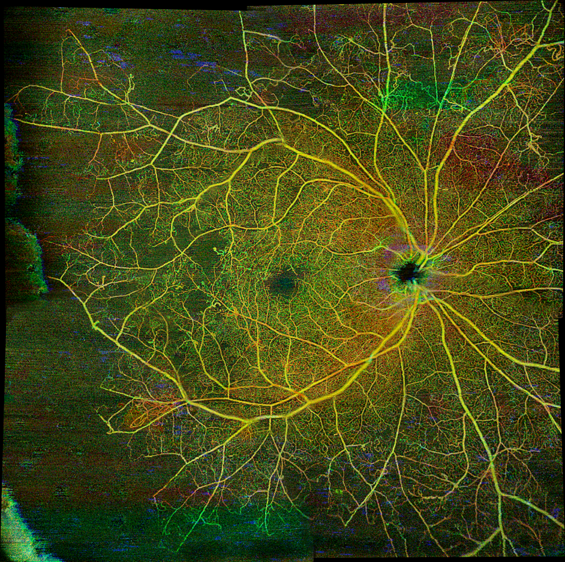 State-of-the-art widefield Optical Coherence Tomography Angiography (OCTA) image of a subject with early proliferative diabetic retinopathy demonstrating areas of impaired perfusion in the peripheral retina and possible neovascularization.  Dr. Kashani’s research group is a leader in the application of OCTA to detect retinal vascular changes in a wide-range of ocular and systemic diseases. State-of-the-art widefield Optical Coherence Tomography Angiography (OCTA) image of a subject with Neovascular age-related macular degeneration demonstrating choroidal neovascularization (CNV) beneath the retina.  The top image illustrates the retinal vasculature.  The middle image illustrates the diffuse CNV that is present within and above the pigment epithelial detachments that are evident in the OCT scan in the bottom panel between the yellow segmentation lines.

Are you interested in applying for a training or staff position with the Kashani Lab? Please send all inquiries to akashan1@jhmi.edu.