Investigations aimed at gaining a better understanding of the pathogenesis of retinal and choroidal neovascularization and developing new ways to treat them.

New blood vessel formation or neovascularization (NV) is essential for normal eye development, but it can also cause severe ocular disease. In the retina, NV is associated with a number of disease processes, the most common of which is diabetic retinopathy, a major cause of new blindness in young patients in developed nations. Occlusion of retinal vessels leading to retinal ischemia is a feature shared by most diseases in which retinal NV occurs. This observation led to the hypothesis that the development of retinal NV is stimulated by one or more angiogenesis factors released by ischemic retina. One of the objectives of our laboratory is to identify the factor or factors involved. This issue has been addressed by incorporating growth factors into sustain release polymers and implanting them into the vitreous cavity , generating transgenic mice with retina-specific expression of growth factors (Figure1), and studying transgenic and knockout mice in models of retinal neovascularization. Our studies suggest that vascular endothelial growth factor (VEGF) plays a central role in the development of retinal NV, but other factors are also likely to play a role. We have identified one group of agents, antagonists of integrin a vb 3, that show potential as therapeutic agents for retinal NV (Figure 2) and we are studying several others.

Choroidal neovascularization (CNV) occurs in several disease processes and is a major cause of severe visual loss, particularly in patients with age-related macular degeneration (AMD). Destruction of the entire CNV complex by laser photocoagulation provides some benefit to a small minority of patients in whom the fovea is not involved and the extent of the CNV can be clearly delineated, but is complicated by a high rate of recurrence and subsequent loss of vision. Surgical removal of CNV may help some patients, particularly those with ocular histoplasmosis, but it is also complicated by a high rate of recurrence and resultant loss of vision. Development of pharmacologic therapy for CNV would be a major advance and is also a major objective of our laboratory.

(A). On postnatal day 10 (P10), ectopic cells were identified at the inner border of the outer nuclear layer (arrow). (B) Cells (arrow) similar to those seen in (A) are located among photoreceptor inner and outer segments adjacent to the RPE (arrowheads) on P14.(C) An aggregate of cells among photoreceptors (arrow) on P18 has an erythrocyte within a lumen (asterisk), indicating that it is organized into a perfused blood vessel. (D) A well formed blood vessel with two lumens (small arrows) is seen extending through the outer nuclear layer to a clump of cells among photoreceptor inner and outer segments (large arrow) on P21. (E) On P31, a blood vessel with a large lumen (asterisk) is seen in the subretinal space and is partially covered by RPE cells (arrowheads). (F) A vessel wall in the outer nuclear layer (large arrow) extends to a large plexus of vessels in the subretinal space on P45. An erythrocyte is seen in a lumen adjacent to the asterisk and RPE cells (arrowheads) cover much of the vascular complex. 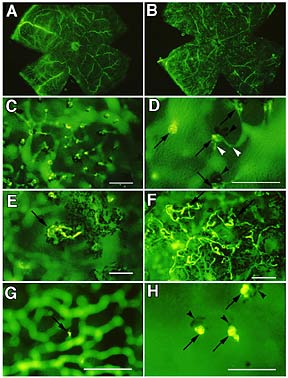 (A) Endothelial cells of retinal NV on the surface of the retina stain intensely for avb3 (arrows) and there is light staining in a blood vessel within the retina (arrowhead) that may be contributing to the NV (x400). 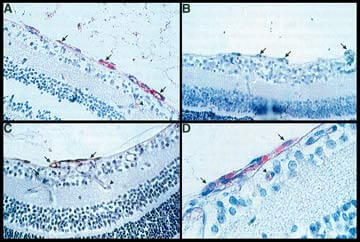 (B) Substitution of normal serum for primary antibody results in elimination of staining in retinal NV (x400).

(C) NV on the retinal surface stains for avb3 and blood vessels within the retina that connect with the NV ("feeder vessels", arrowhead) stain lightly (x400).

(D) A clump of endothelial cells on the surface of the retina stain intensely for avb3 (arrows). There is light staining in a small retinal blood vessel (arrowhead) (x1000) (Chromagen - HistoMark Red; counterstain - hematoxlyn).