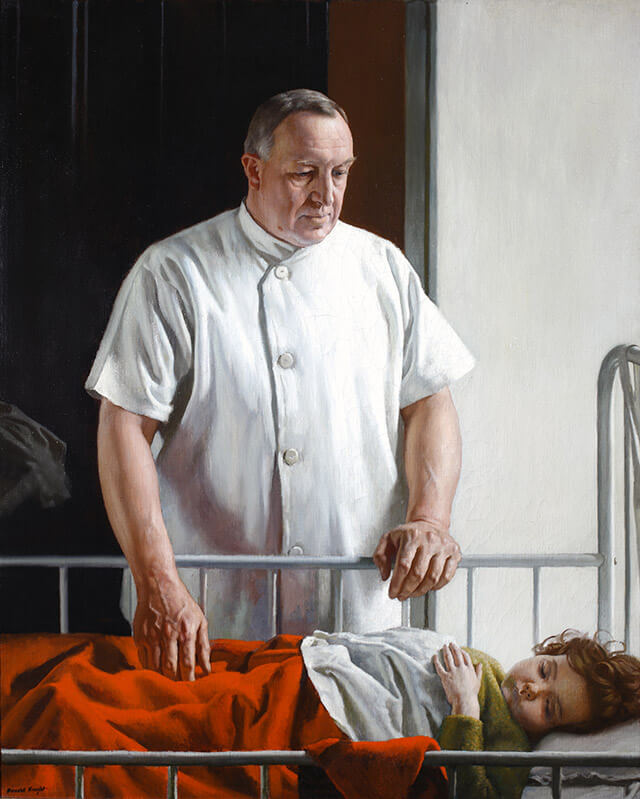 At the invitation of Dr. William Halsted, chief of surgery at The Johns Hopkins Hospital, Dr. William S. Baer organized the first Orthopaedic Outpatient Clinic in 1900. Dr. Baer had received his undergraduate and medical degrees from The Johns Hopkins University and was an intern and resident in general surgery at Johns Hopkins. The clinic was located in the space now occupied by the Emergency Medicine Department.

Dr. Baer developed a hip joint arthroplasty using an interposition membrane of pig's bladder. He also developed new procedures for low back pain and the treatment of osteomyelitis. He graduated his first resident, Lewis C. Spencer, from the Department of Orthopaedic Surgery in 1915. Until his death in 1931, he graduated one resident annually, many of whom became leaders in American orthopaedics.

One of Dr. Baer's partners in private practice, George E. Bennett, was appointed orthopaedic surgeon in charge in 1931. Orthopaedic surgery had just begun to organize, unite and standardize training and certify specialists when Dr. Bennett took this position. By 1937, one sixth of the 150 surgeons certified as orthopaedists by the American Board of Orthopaedic Surgery had completed their residencies at Johns Hopkins. Dr. Bennett retired in 1947.

A third partner of Drs. Baer and Bennett, Dr. R. W. Johnson, Jr., became the next program chairman. Among his many significant contributions was the organization of the Journal of Bone and Joint Surgery. Dr. Robert A. Robinson was appointed as the first full-time professor of orthopaedic surgery at Hopkins in 1953. Under Dr. Robinson's tutelage, the residency program expanded to include additional residents, a research component and rotations through affiliated hospitals.

In 1973, with reorganization of the Department of Surgery into sections of surgical sciences, orthopaedics achieved greater organizational and financial independence with elevation to departmental status.

Dr. Lee H. Riley, Jr., was appointed director of the department in 1979 when Dr. Robinson became professor emeritus. Under Dr. Riley, the program expanded to graduate five residents annually; a new Orthopaedic Center was opened in 1982; a rotation to the Maryland Institute for Emergency Medical Services was initiated to increase the residents' experience with polytrauma; a spine service was added to the department; and the residency program was approved for an additional year of training.

In April 1991, Dr. Richard Stauffer joined the Department of Orthopaedic Surgery as the orthopaedic surgeon in chief. Dr. Stauffer's status as an internationally-known orthopaedic surgeon enhanced the department and its involvement with the rest of The Johns Hopkins Medical Institutions. Dr. Stauffer expanded the already outstanding faculty and staff with the addition of world-renowned physicians and researchers.

In January 1998, Dr. Richard Stauffer passed away after a complicated illness. In the interim, we were fortunate to have the leadership of Dr. John P. Kostuik, professor of spinal surgery. In October 2000, concluding a nationwide search, Johns Hopkins University School of Medicine officials named Dr. Frank J. Frassica as chairman of the Department of Orthopaedic Surgery.

Under Dr. Frassica, the International Center for Orthopaedic Advancement lab was dedicated and expanded, the Tumor Biology Laboratory opened, the orthopaedic surgery suite opened at the Johns Hopkins Health Care and Surgery Center in White Marsh in 2005, and the Center for Musculoskeletal Research was formed in 2009 to provide a multidisciplinary approach to research, with a focus on interdepartmental collaborations.

Dr. James Ficke, a nationally renowned expert in the treatment of complex foot and ankle injuries, lower-extremity trauma, and amputation, was appointed director of the department in 2013. Known for his work in trauma and his ability to foster collaboration, he brought a unique perspective to this role and added new expertise, including the specialty of limb salvage, to the department. During his tenure, the department celebrated its 100th anniversary in 2014.

"A Century of Excellence:" The History of Johns Hopkins Orthopaedic Surgery

Curious about how our department came into being? Our residents and faculty discuss the history of how William Baer created the orthopaedics department at Johns Hopkins Medicine, and how we expanded each of our areas of specialty.