In This Section
Home > Opioid Addiction

The Science of Addiction

Can opioids be taken responsibly? 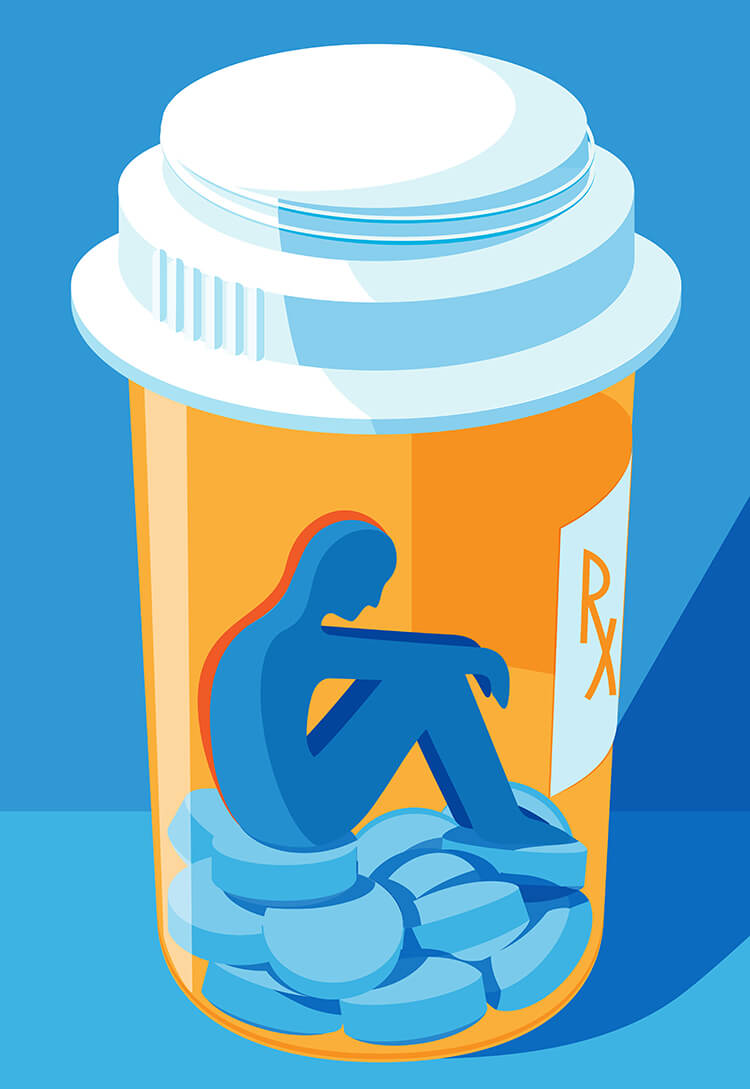 Opioids are an effective painkiller and should be used appropriately, and to do so, the patient needs to take a level or responsibility for their medical care. If you are going to have a medical procedure, you should have a conversation with your physician about pain control.

How addictive are opioids?

It takes a couple of weeks to become physically dependent on an opioid, but that varies by individual. If you take an opioid for a day or two, it should not be a problem and, generally, you will not become addicted. However, some studies show even the first dose of an opioid can have physiological effects.

For some time in this country we believed patients weren’t at risk of addiction. No one knows for sure the percentage of those who are at risk. What we do know now through an annual survey of drug use in the U.S., when people were asked if they had used heroin, researchers found that 50 percent of those who had also had a longtime history of opioid use and 50 percent of those went on to have problematic heroin use.

We also know that the duration of opioid use can lead to physical dependence. If you’re taking an opioid regularly for a period of time there’s a chance that you’ll become physically dependent, and that’s a risk factor for continued opioid use.

Is opioid addiction a disease?

Opioid addiction is not simply like diseases such as pneumonia — there’s not a magic bullet that “cures” the person, like an antibiotic can cure pneumonia. We can think of opioid abuse as a medical illness that is governed by things inside of us and outside of us.

Medical conditions typically have a core defining feature. With drug abuse, we can think of the defining feature as the dysregulation of choice that is governed by things inside of us (physiologic drives, genetic vulnerabilities) and outside of us (external cues in our environment, the availability of the drug). For example, think about eating — there is a physical craving, but environmental queues can engage our choice to eat, even when we aren’t hungry.

When we talk about addiction or opioid use disorder, often people refer to a syndrome of symptoms. There is a syndrome of problematic use of the opioid. The syndrome has features, such as the person using the opioid is giving up other things in their life, and the use of the drug starts to impact them (their health, their relationships). They crave the drug, and the use of it starts to impact their whole life. Their life becomes organized around the use.

In addition, with opioids (and other drugs as well, such as alcohol) there is something else — physical dependence, a physiological adaptation that occurs when using a substance. When the person stops taking the drug, they experience withdrawal. Consider caffeine, for example — if you stop consuming it, you can develop a withdrawal headache and flulike symptoms. It is important to understand that you can be physically dependent on a substance but you don’t necessarily have problematic use. A cancer patient with chronic pain may be physically dependent but not addicted.

Why are some people more susceptible to opioid addiction?

Nobody is quite sure why one person becomes addicted to opioids and not another. Typically, opioids produce pain relief, which is good after surgery. However, for some people opioids create a pleasurable effect. For example, caffeine is a reinforcing drug — people like the effects.

That is true for about 80 percent of the adult population in U.S. But, some people avoid it because it makes them jittery or anxious. Early in the process of opioid use, people may take it because of the pleasurable effect, and some people actually don’t like the effect of an opioid and may go on to avoid them. If you take an opioid and your pain is gone, and you find yourself saying, “I feel really good,” it may be a warning sign that you are vulnerable to misusing these medications.

Over time that good effect diminishes for people who like how an opioid makes them feel, and many people take more opioids because they hope to get that good feeling, and they also don’t want to go through withdrawal.

How are medicines used to treat opioid addiction?

Methadone, when administered properly, is included in treatment with counseling and is always provided in a clinic setting. It helps to block the effects of opioids and to reduce cravings.

The medicine buprenorphine also helps opioid cravings without giving the same high as other opioid drugs. Prescribed by many physicians, this is typically a daily dose placed under the tongue and can also be delivered as a once-a-month injection or through thin tubes placed under the skin every six months.

These medicines both activate opioid receptors in the body that suppress cravings, and are effective and similar in safety and side effects and typically used for maintenance treatment. They can be used as a taper agent as well but some patients relapse, and we need to try something different with those patients who relapse several times. Patients who are highly motivated and have good social support have a tendency to do better.

How is naltrexone used to treat addiction?

This medicine is very different and doesn’t activate the opioid receptor the way that buprenorphine and methadone do, but instead blocks the euphoric/sedative effects of opioids. Your system must be completely free of all opioids before beginning naltrexone. It can be taken orally or as a once-a-month injection.