Erica Johnson, director of the internal medicine residency program at the Johns Hopkins Bayview Medical Center, is forging bonds of trust between the hospital and the people who live near it.

Adolescent medicine specialist Errol Fields is working to lower HIV rates among adolescent and young adult black men who have sex with men.

These faculty members were recruited with support from the Strategic Planning Recruitment and Retention Program, established by the dean’s office in 2014 to increase the number of underrepresented minorities on the school of medicine faculty.

“When you have a diverse group at a table, solving problems, that’s always better,” says Janice Clements, vice dean for faculty and professor of molecular and comparative pathobiology. “You come up with diverse solutions, you think more broadly. It makes our thinking better.”

The Association of American Medical Colleges (AAMC) defines underrepresented minorities in academic medicine as African-Americans, Hispanics, Pacific Islanders and Native Americans. In 2013, according to the AAMC, just 4.1 percent of the physician workforce was black or African-American, and 4.4 percent was Hispanic. Less than half of 1 percent was American Indian or Pacific Islander.

In 2016, 13.3 percent of the U.S. population were African-American, 17.8 percent was Hispanic or Latino and 1.3 percent was American Indian or Alaska Native, according to the U.S. census.

At Johns Hopkins, about 6 percent of the school of medicine’s faculty comprises underrepresented minorities, mostly African-Americans and Hispanics, says Clements. Baltimore is 63 percent African-American and about 5 percent Hispanic or Latino, according to the census.

“We are competing to recruit underrepresented minorities for our faculty,” Clements says. “If we want Hopkins to thrive and stay competitive as the best place to do medicine and science, we have to get the best people.”

The Hopkins recruitment program allots $250,000 per year to support the research efforts of new underrepresented minority faculty. The money is helpful, recruits say, but so are the support and mentoring that are essential components of the program.

“My decision to come to Hopkins was based on having a mentor, in my case pulmonologist Sonye Danoff, co-director of the Hopkins Interstitial Lung Disease Clinic,” says Cheilonda Johnson. “The strong research program here was also important to me, as well as the fact that I had research underway.”

Johnson graduated from the University of Pennsylvania medical school and trained at Massachusetts General Hospital. She joined the Hopkins faculty in 2014 after getting to know the institution through a fellowship in pulmonary and critical care medicine and a master’s degree from the Bloomberg School of Public Health.

Faculty members also say they chose Hopkins because they saw opportunities to make a difference in the clinic, lab and community.

Johnson, for example, says few people before her studied genetic links to autoimmune myositis interstitial lung disease. “I saw that people who were African-American had more initial lung disease, and it was more severe. I really wanted to understand what was driving that pattern.” 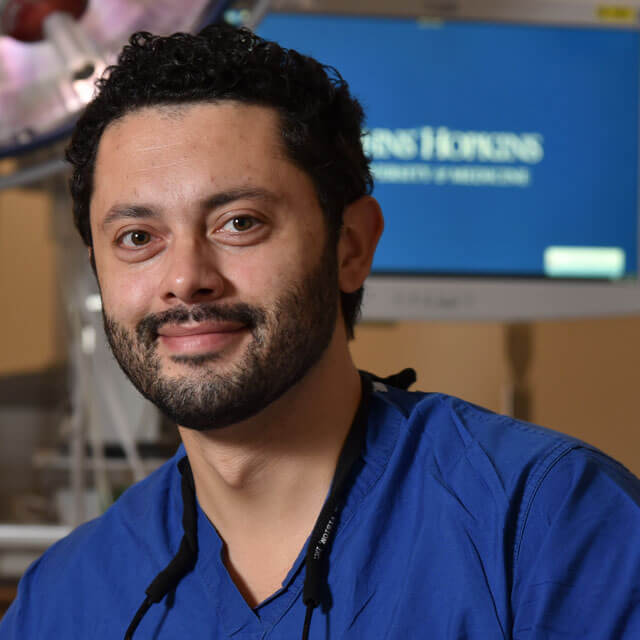 So far, the program has recruited or retained 14 faculty members, including Alejandro Garcia, hired in 2016. Garcia, who grew up north of New York City, went to Cornell University for undergraduate education and medical school, then completed a general surgery residency at the Columbia University Medical Center.

The recruitment and retention funding, he says, gives him time to study how to reduce kidney damage in pediatric patients who use a heart-lung treatment called extracorporeal membrane oxygenation, or ECMO. “If you spend all your time operating, you don’t get the opportunity to advance the field to the next level,” he says.

He also likes educating and reassuring Spanish-speaking families whose children need surgery. “They feel a lot of pride to have someone who speaks Spanish, who looks like them—someone who can be their advocate,” he says of the parents who turn to him for advice.

Garcia spoke recently on a Spanish-language radio program in Washington, D.C., an appearance arranged by Centro SOL, the Johns Hopkins Bayview organization focused on improving Hispanic health and opportunity. “I never imagined being on the radio,” he said. “I’m excited at the potential to really have a meaningful impact not only with ECMO but with the Hispanic community in the area.”

Erica Johnson agrees that helping her community is an important part of why she left an 11-year military career to join Johns Hopkins in 2014. Johnson attended the University of Maryland School of Medicine with a U.S. Army scholarship, and then completed her internal medicine residency at Walter Reed Army Medical Center in Washington, D.C., and an infectious diseases fellowship in the San Antonio Uniformed Services Health Education Consortium. She was a U.S. Army major and infectious diseases physician at the San Antonio Military Medical Center when she joined Johns Hopkins. The recruitment and retention program made it possible by funding a portion of her salary, says Johnson.

As important, she says, were mentors and leadership who “made it very clear to me that not only did they want me to come here, but that once I got here I would be able to succeed.”

Growing up in West Baltimore and Woodlawn, Johnson was aware that the relationship between Johns Hopkins and city residents could be tense. She’s working to build trust as co-director of Medicine for the Greater Good, a program that requires internal medicine residents to bring health-enhancing programs to the community, such as teaching local civic and religious leaders about health issues such as diabetes and mental illness, so they can help the people they know.

Johnson is also making sure residents learn about social determinants of health, such as exposure to crime, transportation options and quality of education. Her research interests include health disparities in care and how medical residents learn the standards and ethics that promote trust. 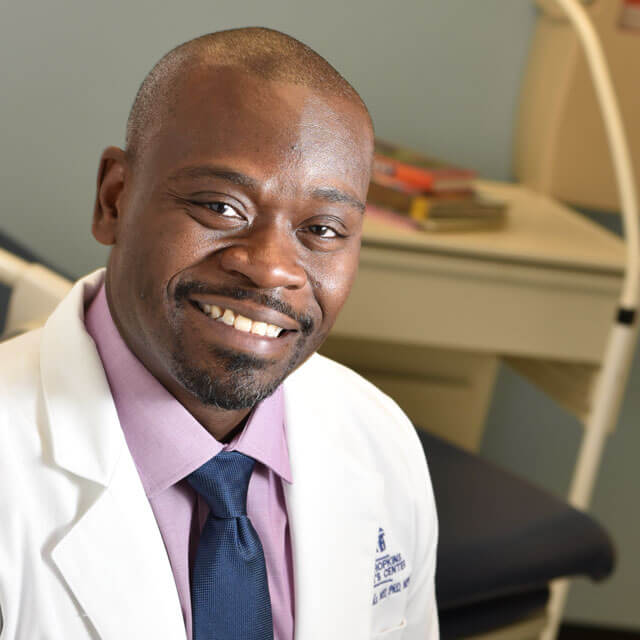 Adolescent medicine specialist Errol Fields agrees that his own perspective as a black gay man helps him in both his clinical and research work to understand health disparities affecting young black gay, bisexual and other men who have sex with men. He’s working on strategies to provide young men at risk for HIV access to the medication known as PrEP, or pre-exposure prophylaxis, and other services that could keep them from getting HIV and other sexually transmitted infections.

“Having people from diverse backgrounds—racial, socioeconomic, sexual and gender identity— on our research teams helps to inform the types of research questions we ask and improves our understanding of why some groups are disproportionately affected by diseases like HIV,” he says.

Fields, who joined the faculty in 2014, has an undergraduate degree from Harvard, a medical degree from the Johns Hopkins University School of Medicine, a Ph.D. from the Bloomberg School of Public Health and a master’s in public health from Columbia University.

After pediatric residency training at Boston Children’s Hospital and Boston Medical Center, he returned to Johns Hopkins to pursue a fellowship in adolescent medicine. The recruitment grant, which covered about a third of his salary, allowed him to continue his research until he won a career development award from the Centers for Disease Control and Prevention.

Jonathan Chrispin’s Haiti-born parents were strict. Growing up in Queens and Long Island, New York, he and his sister were allowed to play video games only on weekends, and could watch only one television show, Jeopardy, because it was educational. They also weren’t allowed to use the word “can’t.”

“Since we were young, our parents told us there were no limitations on what we could do,” says Chrispin, now 34 and a cardiologist on the Johns Hopkins University School of Medicine faculty since July 2017. (His sister is a lawyer.)

He’s found the same combination of rigorous expectations and opportunity at Johns Hopkins, where he was recently named a Robert E. Meyerhoff Assistant Professor. The five-year endowed seat “supports my research and gives me motivation,” says Chrispin, who studies the electrical system that controls the heart, including the mechanisms behind irregular heartbeats and sudden cardiac death.

The endowment, created in 2007 by local businessman and philanthropist Robert Meyerhoff, supports two school of medicine assistant professors at a time with funding of between $37,000 and $45,000 per year. It was created to recruit and retain minority faculty identified as future leaders. Also named in 2017 was Arthur Vaught, an assistant professor in maternal and fetal medicine who treats and studies high-risk pregnancies.

Chiadi Ndumele, who joined the school of medicine faculty in 2011, is completing his term as a Meyerhoff assistant professor. “It gave me time to put together an investigative agenda that would allow me to apply for other funding,” says Ndumele, who has since won funding from the Robert Wood Johnson Foundation and the National Institutes of Health to continue his studies of the links between obesity and heart disease.

“An endowed five-year professorship at this early stage of one’s career is an important sign,” he says. “It’s a vote of confidence in you and what you’re pursuing and it gives you room to develop your research platform.” 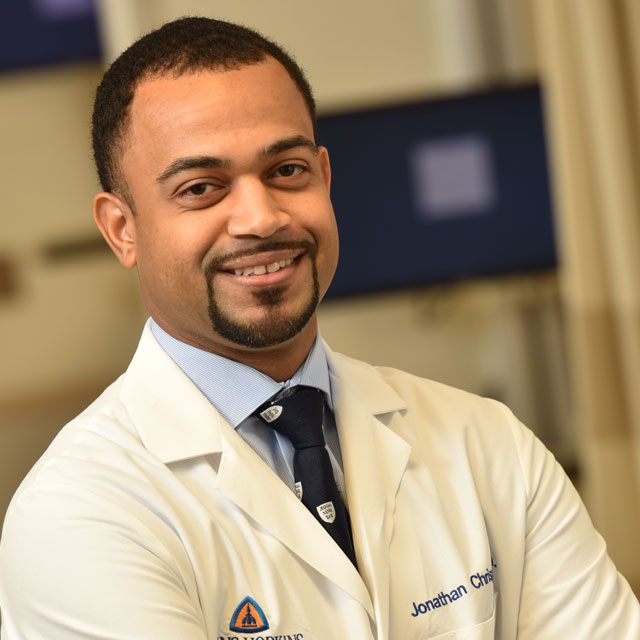 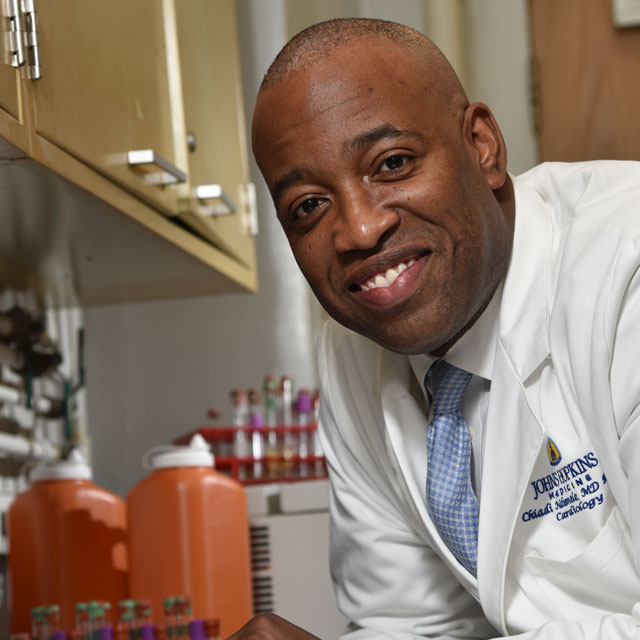 Chiadi Ndumele
back to top button