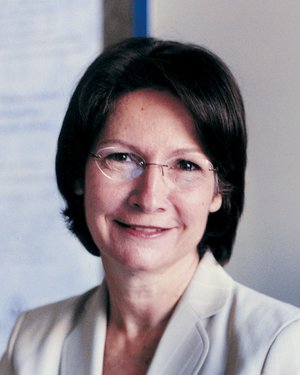 Janice E. Clements, Ph.D., is a professor of molecular and comparative pathobiology, the Mary Wallace Stanton Professor for Faculty Affairs, and serves as the vice dean for faculty at the Johns Hopkins School of Medicine. Dr. Clements has been the Vice Dean of Faculty of the School of Medicine since 2000 and, in this role, oversees all policies and programs related to faculty appointments and promotions as well as faculty development.

Her research focuses on lentiviruses and their role in chronic neurological disease. She developed the first molecular and biochemical tools to study lentivirus molecular biology and was the first to characterize the unusual genome of the lentiviruses. She was also the first scientist to report that HIV is a lentivirus.

As director of the Retrovirus Laboratory, she and her team focus on the molecular virology and pathogenesis of lentivirus infections with emphasis on animal models of AIDS dementia and central nervous system (CNS) disease. Recent discoveries include the use of minocycline, a common antibiotic often used against acne, to protect against viral HIV-related cognitive disease.

Dr. Clements received her Ph.D. in biochemistry from the University of Maryland. She completed two postdoctoral fellowships at Johns Hopkins—one in molecular biology and virology and the other in neurology. Dr. Clements joined the Johns Hopkins faculty as an assistant professor of neurology in 1979 and then the faculty of the Division of Comparative Medicine in 1988. She was promoted to professor in 1990.

Dr. Clements was instrumental in the Division of Comparative Medicine becoming a department and served as its first director; it is now the Department of Molecular and Comparative Pathobiology. She has served as a member of the steering committee of the Johns Hopkins Women's Leadership Council, helped to create the new position of associate dean for diversity and cultural competence, and urged changes in the composition of search committees to be more inclusive of women and minorities. She has also steered initiatives to improve the quality of teaching of residents and medical students at the school. In 2013, Dr. Clements was named to the National Institutes of Health’s Council of Councils to make recommendations on research in areas of emerging scientific opportunities, rising public health challenges, or knowledge gaps that deserve special emphasis.

Research in the Retrovirus Laboratory focuses on the molecular virology and pathogenesis of lentivirus infections. In particular, the interest is in understanding the pathogenesis of HIV and the development of HIV neurocognitive disease.

In order to study HIV, the simian immunodeficiency virus (SIV) has been developed and is used to examine the molecular basis for the pathogenesis of HIV CNS disease as well as HIV latency and reactivation in the era of combined antiretroviral therapy (cART). The first SIV macaque model of virus suppression by cART was developed in the Retrovirus Laboratory in collaboration with the Siliciano HIV laboratory. Research projects include studies of viral molecular genetics and host cell genes and proteins involved in the pathogenesis of disease.

Further studies of lentivirus infections and latency of macrophages in the central nervous system and the lung are being pursued to characterize these cells as viral reservoirs during suppressive cART. These studies have led us to identify the viral genes that are important in neurovirulence of SIV and the development of CNS disease. The SIV envelope gene and the NEF gene both play important roles in infection of the CNS.

Dr. Clements was the first to identify the role of CD4-independent virus entry in the pathogenesis of neurological disease. They have shown that neurovirulent SIV can infect cells in a CD4-independent, CCR5-dependent manner in primary CNS endothelial cells and cell lines that express only CCR5.

Furthermore, studies have shown that the Nef protein from the neurovirulent virus interacts with different cellular kinases than the Nef protein from other strains of SIV. Their studies have demonstrated that replication of neurovirulent virus in vivo by quantitation of viral RNA copies in the brain and viral load in cerebral spinal fluid is directly correlated with the development of CNS lesions during SIV infection.

Finally, they have shown that virus replication in the CNS is independently regulated from the peripheral blood. Because virus replication in the brain is mainly in macrophages, while in the peripheral blood it occurs in lymphocytes, control of viral replication by innate immune responses in the brain is significant. Current research is focused on identifying the mechanism for viral latency in monocytes and macrophages; developing sensitive assays to quantitate latently infected monocytes, macrophages and resting CD4+ T cells in cART suppressed SIV-infected macaques; and identifying approaches to eradicating latently infected cells throughout the body in SIV models to provide a proof of concept for HIV eradication in humans.

Janice E. Clements, Ph.D., on her teams discovery that a safe, inexpensive antibiotic will improve on the current treatment regimens of HIV-infected patients.