For John Feldmann, deterioration of his eyesight began at the young age of 45, when dry macular degeneration began its assault. By 55, both eyes began clouding with cataracts. It was a family friend who referred Feldmann to Wilmer, where he came under the care of Neil Bressler, M.D., Wilmer’s James P. Gills Professor of Ophthalmology, some 16 years ago.

At that point, Feldmann’s retinal condition appeared to be accounting for most of his decreased vision. So Bressler made the call to monitor the macular degeneration and leave the cataracts alone, since cataract surgery was unlikely to improve his vision at that time.

“A decade ago, some ophthalmologists were fearful that cataract surgery might lead to worsening of the macular degeneration,” Bressler says of the decision to hold off on removing the cataracts.

Feldmann was examined and sent home with a then-new home monitoring system, a preferential hyperacuity perimetry system, that allowed his caregivers at Wilmer to keep daily tabs on his condition.

By this point in his life, Feldmann, an underwriting manager by profession, was unable to read and therefore unable to do his work. “I’d planned to work until 70, but that didn’t happen,” he says of the dreams he had to let go. “Your sight is something you take for granted, but it can disappear.”

Feldmann could no longer drive, but he did manage to play golf with help from his ever-patient friends and by frequenting a course he had played for years.

Feldmann next turned to vision rehabilitation for help, going to see Judith Goldstein, O.D., Wilmer’s chief of the Lions Vision Research and Rehabilitation Center. She immediately began working with him to enhance his function using his available vision. Goldstein assisted Feldmann in a number of ways. She prescribed a hand magnifier with which he could spot-read his mail. She recommended an Amazon Echo that allows him to use voice command to surf the internet to get the news, weather and other updates. There was also a big-button touch-tone phone that allows him to call his family and friends.

One type of visual assistive equipment in particular transformed Feldmann’s life. It was a pair of telescopic lenses that allowed him to sit next to his wife on a couch and watch TV instead of standing two feet from the screen.

“John is a great patient. He is motivated and worked hard to find his new normal,” Goldstein says. “It’s a big challenge for each patient, and that’s why progress depends on the individual. His lived experiences inspired him to join and take a leadership role in the Lions Club.”

While the wet form of his macular degeneration remained stable, eventually, Feldmann’s vision continued its decline because of worsening cataracts. It got to the point where even the process of counting fingers on his doctor’s hand was nearly impossible. It was time to consider removing his worsening cataracts.

At that point, Bressler says he looked to mounting evidence to conclude that removing the cataracts would not exacerbate Feldmann’s macular degeneration.

For the cataract surgery, Bressler referred Feldmann to Ashley Behrens, M.D., Wilmer’s KKESH/Wilmer Professor of International Ophthalmology, chief of the Division of Comprehensive Ophthalmology and a veteran cataract surgeon. Behrens recalls that first consultation with Feldmann.

“He was in pretty rough shape. He was using a cane, and his wife was actually guiding him into the clinic,” Behrens remembers. He told Feldmann not to expect miracles from the cataract surgery. They would remove the cataracts on separate surgeries, one eye at a time.

They started with the good eye, to help realize the greatest benefit to Feldmann’s eyesight.

That cataract was so thick that a lot of ultrasound energy had to be used during the procedure, says Feldmann, who was awake and alert during the surgery. The usually 15-minute operation took almost 30 minutes to complete. The outcome was “incredible,” according to Feldmann. The vision in that eye prior to surgery was 20/300. After the procedure, the sight was 20/40. Due to that success, the surgeon moved forward with surgery on the other eye.

“Before the surgeries, I could only see shadows,” says Feldmann. “Afterward, I’m sitting there in the operating chair. It was amazing. I could see Dr. Behrens. I said, ‘Oh my goodness. I can see you.’”

Suddenly, at 71 years of age, after more than a decade of steadily declining vision, giving up reading, giving up his job, giving up his driving privileges, John Feldmann could see again. His vision improved to 20/40 and, with corrective glasses, that number improved to 20/25. Good enough, Feldmann says, that he was able to make out the stunned expressions on the faces of the employees at the Department of Motor Vehicles when he applied for and received his new driver’s license.

“I can’t tell you the joy. I have a whole new life,” Feldmann says. “It’s a testament to what teamwork can really do. I’m forever grateful to Wilmer and doctors Bressler, Goldstein and Behrens.” 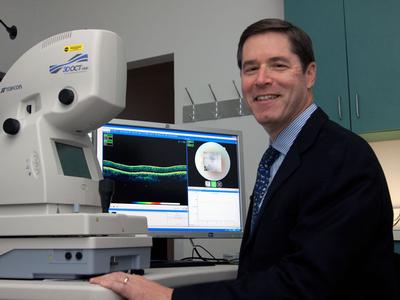 Neil Bressler
back to top button