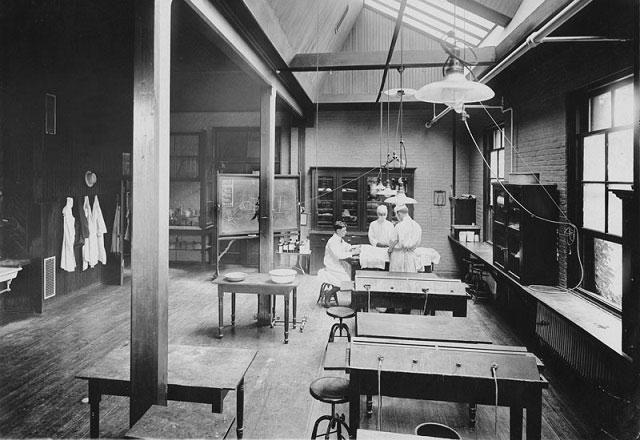 Students conducting research at the Hunterian laboratory, circa 1905.

From The Special Field: A History of Neurosurgery at Johns Hopkins by Neil A. Grauer, ©2015

In 1904, Halstead appointed Harvey Cushing, who had come to Hopkins as a surgical resident in 1896 and joined the faculty in 1901, to head the laboratory. Cushing, whose surgical and scientific interests had begun centering on disorders of the nervous system — and who became the first to declare neurosurgery a separate specialty — refocused the Hunterian’s mission on neurosurgical research and techniques.

Under Cushing and his successors, Walter Dandy, D. Earl Walker and Donlin Long, researchers in the Hunterian made significant discoveries and devised important innovations that had substantial impact on patients requiring either brain surgery or other operative procedures. In 1991, Henry Brem, then an assistant professor of neurosurgery, re-established the Hunterian Neurosurgical Laboratory’s focus on novel treatments for brain tumors. The strong tradition of performing basic research with clinical relevance has continued to this day.

Interested applicants should send an updated CV and a cover letter to Betty Tyler at btyler@jhmi.edu

Visit Charitable Giving for Neurosurgery and specify the program or researcher you would like to support.