At 78, Jan Greer wanted to stay active and athletic. When the pain became too much to bear, he turned to Johns Hopkins. 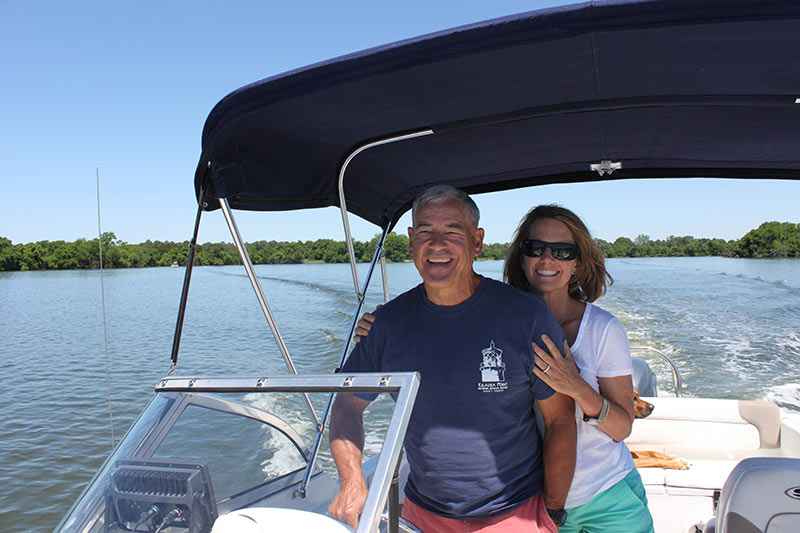 Jan Greer had spent most of his life in motion. An athletic Marine, he loved sailing, power boating, repairing boats, landscaping his home on Maryland’s Eastern Shore, and competing on an elite type of rowing machine. As he passed the 70-year mark, he dealt with some back issues, saw a chiropractor when he needed to, and carried on.

Jan says, “By early 2018, I was having real problems with pain in my legs. My tolerance for pain is pretty high, but one day in March, I drove to the hardware store and couldn’t make it to the door. When I sat down, I felt better, but I couldn’t do my workouts at the gym or do my landscaping around the house.”

Then there were the weddings. His two step-daughters were both engaged to be married that summer. Jan was looking forward to the happy occasions. But he couldn’t stand up for more than five minutes at a time.

He finally relented and went to his primary care practitioner. “Your back is a mess,” the doctor said, reviewing Jan’s MRI report.

The MRI showed that spinal stenosis, a buildup of bone that narrows the holes in the vertebrae (bones of the spinal column), was squeezing Jan’s spinal cord and causing the excruciating pain in his legs. He also had degenerative disk disease in two disks (the cushions between the vertebrae) — one disk was bulging, and one had ruptured.

A handyman Jan had worked with on some major home repairs, recommended that he see Ali Bydon, M.D., at Johns Hopkins’ Neurosurgical Spine Center.

Jan’s primary care doctor sent the MRI images to Johns Hopkins on a Thursday, and the next day, Jan got a phone call to come to see Bydon as soon as possible. “I was grateful that they could get me in so quickly,” Jan says.

Jan says Bydon gave him confidence. “He's very personable and direct,” Jan says. “He doesn't give you doctor-speak you can’t understand. He said he could probably make 90% of the pain go away, and he wanted to operate as soon as possible.”

Bydon says, “Mr. Greer was 78 when we saw him, and he had significant back and leg pain — daily — to the point that he couldn’t do what he wanted anymore.

“Other patients in Mr. Greer’s position might have been told they would have to live with the pain, because of their age, the degree of spinal compression and the comorbidities — other medical problems,” Bydon says. “But without surgery, Mr. Greer’s structural problems could have caused his quality of life to worsen. He could have eventually become paralyzed.”

They scheduled surgery for June 5, two days after the second wedding. Jan made it through both celebrations, treating his pain with acetaminophen and an occasional glass of wine. 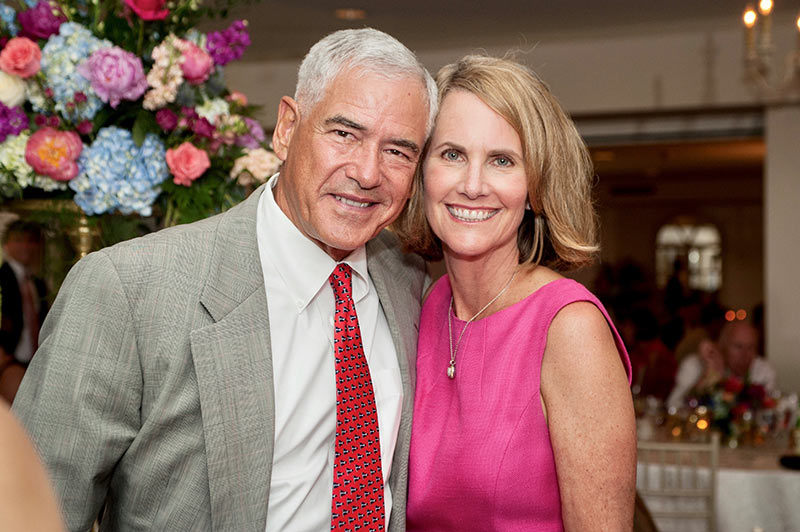 Ali Bydon’s manner is highly professional, but he’s obviously concerned about how you’re feeling both physically and emotionally.”

The procedure took five hours. Bydon performed a laminectomy, carefully removing spinal bone that was pressing on Jan’s spinal cord. He addressed the deteriorated bones in the lower back with spinal fusion, aligning the bones and fusing the third, fourth and fifth lumbar vertebrae, along with the first sacral vertebra, with eight screws. He replaced the injured disks with titanium spacers.

Bydon points out that in Jan’s case, he opted for an open procedure to maximize visibility in the area. As popular as minimally invasive procedures are, they’re not the best option for everyone.

Bydon also notes that people with back problems sometimes undergo multiple procedures. “We were the first people to operate on Mr. Greer’s back,” Bydon says. “The first surgery, when it’s done right, offers the best outcome.” He explains that good results are less certain with repeated procedures that manipulate the nerves and the nerve roots extending from the spinal cord.

Jan trusted Bydon’s approach, and took the extra hardware in stride. A severe hip fracture in 2010 had left him with two titanium plates and a dozen screws in the bones forming the hip. “I used to think I was ‘Iron Man.’ Now I’m just ‘Titanium Guy,’” Jan jokes.

Recovery was tough, but Jan made it through, being careful to avoid non-steroidal anti-inflammatory drugs such as ibuprofen and naproxen, which Bydon advised him could slow bone repair.

Bydon had told Jan that rehabilitation would take no less than six months. Jan was hopeful he’d be well by then, but found the process slower than he anticipated. He went to physical therapy at a center nearby, but stopped after two sessions, deciding to design his own program around walking in the shallow end of a swimming pool.

It worked. After four or five months, Bydon declared Jan’s progress was excellent. 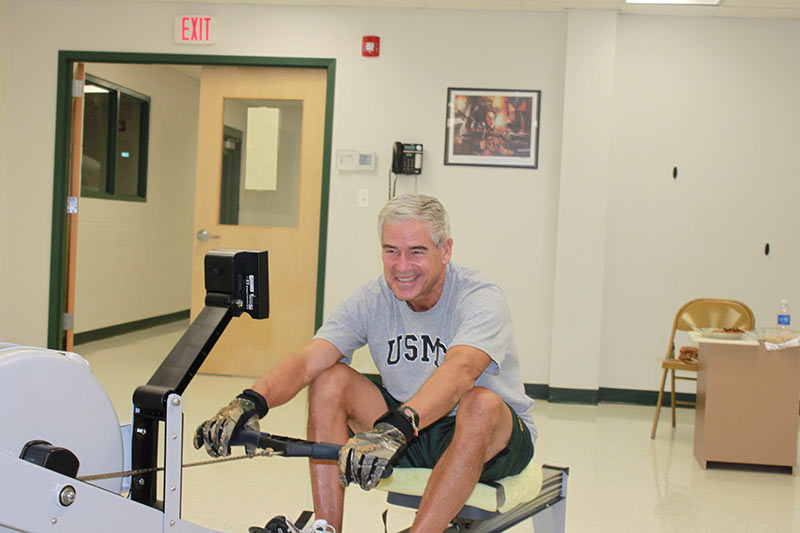 Jan says, “Dr. Bydon and all the Hopkins docs I’ve dealt with are great. I make the two-hour drive and come to Johns Hopkins, because it’s worth it.” (Jan also sees Roger Blumenthal, M.D. yearly at Johns Hopkins’ Ciccarone Center for the Prevention of Cardiovascular Disease, which Blumenthal directs.)

“Ali Bydon’s manner is highly professional, but he’s obviously concerned about how you're feeling both physically and emotionally,” Jan observes. “There aren’t that many like that. Dr. Blumenthal is like that, too.”

Experience was a factor in Jan’s decision to have Bydon perform the spine surgery. “When you have a surgery like this, it’s not minor league,” he says. “You want to go to a guy who does 50 of these procedures a month, not two or three.” Jan says he’s recommended Bydon to many others.

Jan did have one concern. “When I decided to go for the surgery, early in the game I asked about rowing, since it’s the core of my gym activity — did he think I’d be able to do it?”

Bydon didn’t make any promises, but eventually, Jan got his answer. “In May 2019, a year after surgery, I sat down on the C2 and did a test run of 1000 meters. Not only did it not distress me; it actually relieved some of the stiffness and soreness.”

Jan says, “I can do everything I used to do, but I’m not quite back to where I was. You don’t sit out for a year without losing some strength and muscle mass, but I’m working my way back.

“And I’m getting close.” 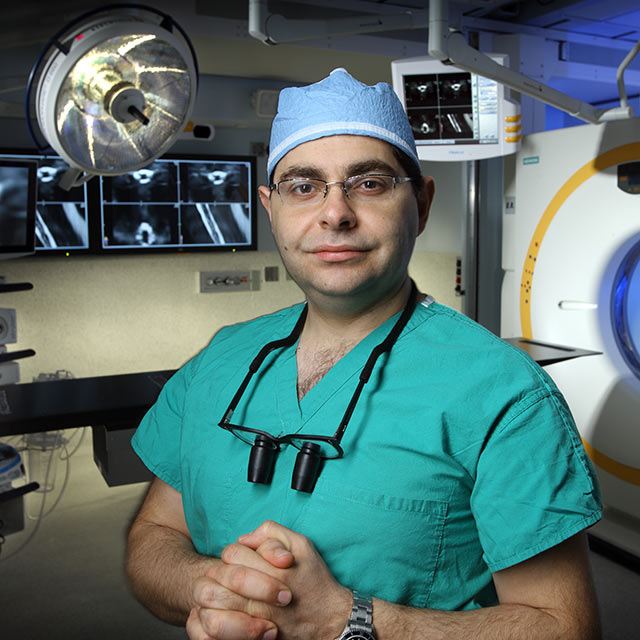 Herniated disks, spinal stenosis, facet joint arthritis and spondylolisthesis are just some of the back problems common among people age 50 and older. The neurosurgeons specializing in degenerative spine problems at Johns Hopkins’ Neurosurgical Spine Center can help address these problems with a range of surgical techniques, including robotic procedures.