Skill and teamwork provided Neale with a diagnosis, a treatment and hope. 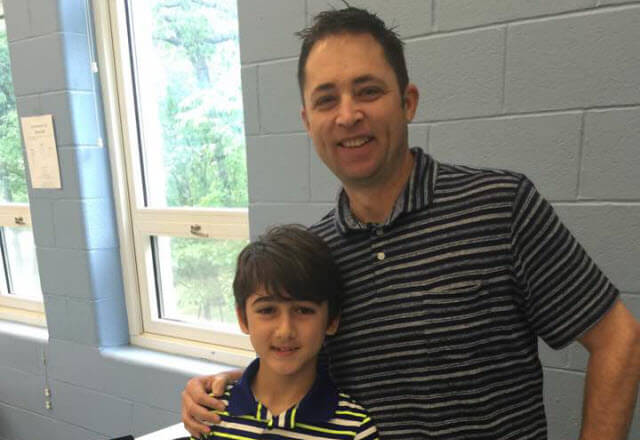 Neale in 2017, recovering from Cushing syndrome and attending his nephew’s school presentation.

The surgeons saved my life. I’d be dead now without their help.

Neale Osenburg was in bad shape. At age 42, he had rapidly gained weight and was up to 267 pounds. His face was round and swollen. He’d developed a “beer belly” that was deeply etched with purple stretch marks.

Worse, a mystifying assortment of medical conditions was plaguing the formerly healthy Marylander: Frequent falls that shattered his suddenly-fragile bones. Soaring blood pressure. Debilitating fatigue, nerve pain and weakening muscles. Neale needed a cane to walk. Then a walker, and finally a wheelchair.

Even his immune system seemed weakened. Neale was getting one infection after another—some of them serious. “If I got a little cold, it seemed to last forever,” Neale recalls. “Small cuts would get infected—one on my foot turned into cellulitis.”

In December 2015, unable to walk on his own, Neale reluctantly quit his brewery job. 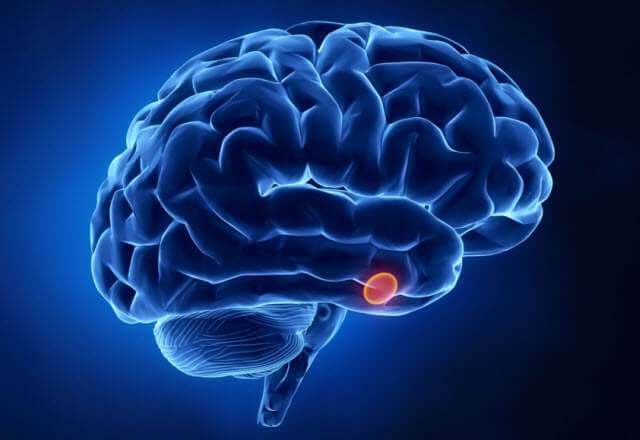 The location of the pituitary gland, deep in the center of the brain.

Looking at Neale’s high blood sugar, one doctor diagnosed diabetes, which accounted for some of his issues but left many others unexplained. Lucky for Neale, another doctor, an internist, looked at Neale’s assortment of problems and recognized the classic signs of Cushing syndrome. She referred Neale to a specialist at Johns Hopkins: endocrinologist Roberto Salvatori, M.D.

What is Cushing syndrome?

Cushing syndrome (named after the famed Johns Hopkins surgeon Harvey Cushing (1869 - 1939) is an endocrine problem, one that has to do with glands and hormones. For reasons yet to be discovered, women are nine times more likely than men to develop it.

Salvatori says, “One hundred percent of Neale’s problems were due to his Cushing. Sometimes this disease is hard to diagnose, but he had a very obvious constellation of syndromes.”

Soon after meeting with Salvatori, Neale experienced congestive heart failure, another complication of Cushing syndrome. He had to be raced to a nearby hospital by ambulance; he was too sick to survive the trip just a few more miles to reach The Johns Hopkins Hospital. Controlling the Cushing’s disease had become critical.

Pituitary Tumor: The Root of the Problem

In Neale’s case, Cushing syndrome was due to too much ACTH production in his body. To save Neale’s life, the doctors had to find out where the excessive ACTH was coming from.

“When we see Cushing syndrome that is this severe, we think of a tumor, often one occurring outside of the brain,” Salvatori says. A variety of tumors can produce ACTH on their own.

Neale’s MRI scan looked normal. But a special test that analyzed blood flowing at the base of Neale’s skull revealed that the excess ACTH was coming from the pituitary area.

Salvatori knew there was a pituitary tumor; the task was to find it. He called upon the Pituitary Center's surgical director, neurosurgeon Gary Gallia, M.D. Using an imaging technique that he himself invented, Gallia was able to locate an adenoma tumor on Neale’s pituitary gland that was pumping out ACTH. Surgery to remove it was the only thing that could reverse Neale’s rapidly deteriorating health.

The tumor was small—just under 1.4 centimeters. But it was wrapped around the carotid artery, the large vessel that supplies blood to the head and brain. Removing the tumor would be risky and difficult.

Salvatori says, “Dr. Gallia had to pull a rabbit out of a hat. We estimated we would only be able to remove 70 percent to 80 percent of the tumor.”

Surgery took place in March 2016. The first attempt was canceled when Neale came down with a sinus infection. But finally the day arrived. Head and neck surgeon Masaru Ishii, M.D., worked with Gallia on accessing the deeply-embedded tumor.

Exceptional skills, a good plan, and a touch of luck won the day. With Ishii’s clear pathway to the pituitary gland, Gallia was able to access the area and gently unwrap the tumor from around the carotid artery and remove it. Despite the odds, he got it all. 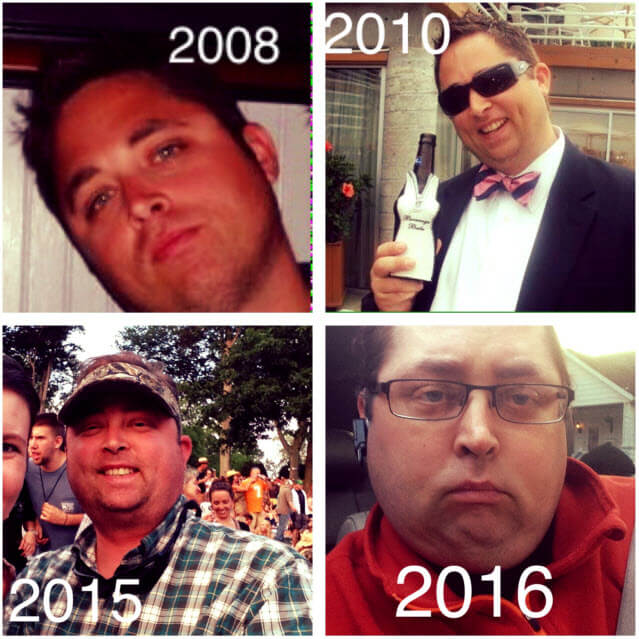 After the pituitary tumor was removed, Neale still had a way to go before his body could start returning to normal. His body had gone from making too much cortisol to suddenly none at all, and had to recover a normal balance.

The excess cortisol coursing through his body over the years had left him weak and depleted. Just after pituitary surgery he had another fall and broke his spine, requiring yet another operation.

Salvatori says, “Neale went through a lot. He was critically debilitated. But he has a positive attitude and got a lot of support from his family.”

Neale is grateful to the entire Johns Hopkins team. “The surgeons saved my life,” he says. “I’d be dead now without their help. I was in the ICU for four or five days, and the nurses took great care of me. Physical therapy and occupational therapy were awesome.”

He’s still working hard at getting his strength back and continuing with physical therapy. He’s lost 107 pounds and says he’s back to his high school weight. His legs are still weak: He can’t run yet. But he can climb stairs, walk down the street and drive, all of which were impossible without assistance before his surgery.

In May 2017, Neale attended his 25th high school reunion, reconnecting with longtime friends who’d supported him throughout his ordeal. He has his sights set on eventually getting back to full-time employment. 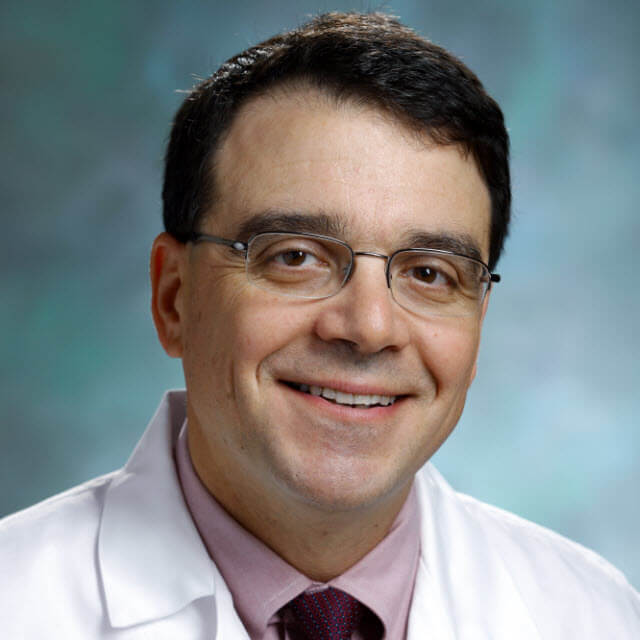 The Johns Hopkins Pituitary Center is a multidisciplinary center of experts in diagnosing and treating pituitary tumors (non-functioning adenomas, acromegaly, prolactinoma and Cushing disease) and other pituitary disorders. With access to the full range of treatments, we offer comprehensive plans individualized for each patient. 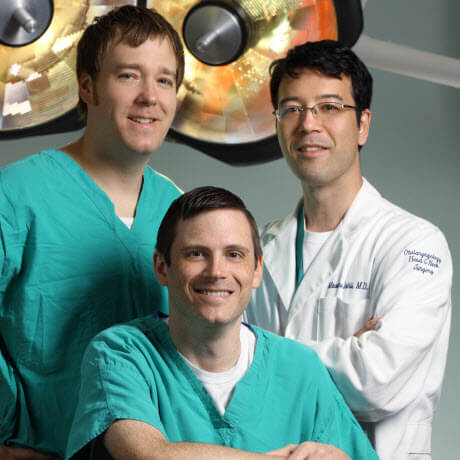