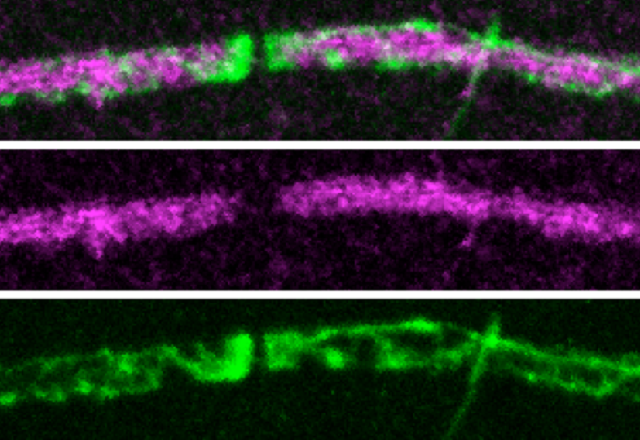 Myelin, a specialized structure formed by oligodendrocytes in the brain, wraps around the output portion of nerve projections called axons , providing insulation, protection and support for the axons so that they may send signals from one nerve to another throughout the brain and body. The goal of this research project was to determine whether life experience could change myelin. We used a cutting-edge technique called in vivo two-photon microscopy, which is an approach that allows for long-term monitoring of living cells — and their individual features — in the intact brain.

Lastly, we tested how constant whisker stimulation might affect oligodendrocytes and myelin in the barrel cortex. We found that mice exposed to hanging beads for three weeks had a dramatic increase in the production of new oligodendrocytes, together forming hundreds of new myelin sheaths. This “sensory enrichment” experiment demonstrates that changes in life experience can alter how much myelin is present in neuronal circuits. Therefore, even in what may be considered a “mature” brain, myelination patterns are still flexible and subject to change. In addition, the low probability of new oligodendrocytes being successfully made by the precursor cells suggests that in order to develop effective remyelination therapies, we must better understand the mechanisms that stabilize these cells that are attempting to become mature oligodendrocytes.  Jennifer Orthmann-Murphy, M.D. Ph.D., is addressing the mechanisms of remyelination in her current research project.

Jennifer Orthmann-Murphy, MD, PhD, prepared this summary of research that was published in Nature Neuroscience by Ethan G. Hughes, Jennifer L. Orthmann-Murphy, Abraham J. Langseth and Dwight E. Bergles. Dr. Hughes was a postdoctoral fellow in the Bergles laboratory, The Solomon H. Snyder Department of Neuroscience, Johns Hopkins School of Medicine and now has his own lab at the University of Colorado. Jennifer Orthmann-Murphy is also a postdoctoral fellow in the Bergles laboratory, as well as a clinical neuroimmunology fellow in the Department of Neurology, Johns Hopkins School of Medicine.