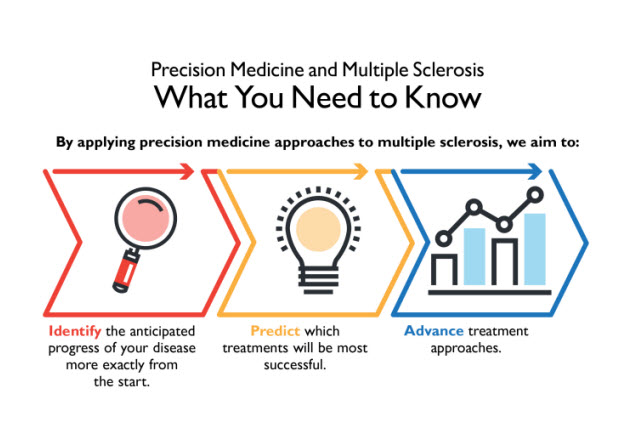 Decades ago there wasn’t much that physicians could do for people suffering from multiple sclerosis-except diagnose the illness and wish them luck.

As of now with the recent approval of Ocrevus, there are 15 FDA-approved drugs and the promise of new therapies on the horizon.  But, Peter Calabresi, director of the Precision Medicine Center of Excellence  (PMCOE) for Multiple Sclerosis, part of the Johns Hopkins inHealth initiative, notes that the often-degenerative illness, which causes lesions in the brain and disrupts the flow of information i n the central nervous system, continues to take a terrible toll.

"We have drugs that put people with relapsing-remitting MS into long-term remission, but about half of the cases become progressive, and people end up in wheelchairs," Calabresi says. Many lose their jobs or see their marriages unravel. "They don't necessarily die directly of MS, but their lives may be devastated by it."

Calabresi is working to change that by using advanced imaging and biomedical and statistical tools to better tailor treatments for MS patients. "The more layers of complexity you understand,” he says, "the more you can fine-tune the therapy."

He has pioneered the use of optical coherence tomography (OCT), an imaging method widely used by ophthal­mologists for eye exams, as a tool for monitoring MS.

Over the past decade, he and his colleagues have built a database of OCT retinal scans of more than 3,000 MS patients.

Tracking the progress of MS in the brain is difficult using established imaging techniques. But by using OCT, Calabresi and his team have been able to show that retinal degeneration is directly related to atrophy in the gray matter of the brain. Thus, retinal scans-which are relatively fast, easy and inexpensive- can be used as stand-alone surrogates for brain damage in MS, providing important clues as to how quickly a patient's disease is progressing.

Today, at the Johns Hopkins Multiple Sclerosis Center, which Calabresi directs, his patients are routinely given annual OCT and MRI scans. He's now trying to improve the scans to the point where he can use the database to generate predictions of a patient's condition 5 or 10 years out.

His clinic is also conducting genetic and metabolic research, which he hopes will bring each patient's illness into sharper focus, allowing even more precise treatment. "That's where I see us going, is just drilling down," he says. "You don't just have MS, you have a variant at a particular stage, and that means you're likely to respond to a specific drug."

Overall, by marshaling all the resources of the new PMCOE for Multiple Sclerosis, Calabresi aims to continually adjust treatment for his patients as their illness progresses, prescribing drugs and therapies with fewer side effects for patients likely to do welI and stronger treatments for those at risk, all in an effort to maximize quality of life. "We're not waiting five years to find out you're in a wheelchair," he says.

Find out more about how the Johns Hopkins Precision Medicine Center of Excellence for Multiple Sclerosis is improving treatments and outcomes.