When it comes to restoring a patient’s normal skull contours after trauma or brain surgery, little has changed for over century—until now.

A new method developed by surgeons at Johns Hopkins Department of Neurosurgery and Department of Plastic and Reconstructive Surgery can reconstruct the skull with less risk of complications.

Patients who have a piece of the skull removed to accommodate a swelling brain caused by brain injury, infection, tumor or stroke typically undergo a second operation—a cranioplasty—a few months later to restore the protective covering.

During the cranioplasty, the missing cranial bone is restored by surgically attaching either the original piece of the skull or a custom contoured implant constructed of titanium, acrylic, or other material.

But in the interim between the original surgery and the cranioplasty, the scalp adheres to the dura, which is the thin protective outer layer of the brain. In this case, surgeons must peel the scalp off the brain and then tuck the skull bone or custom implant back into place, a practice which puts the patient at risk of bleeding, seizure, stroke, cerebrospinal fluid leak and infection. If infection occurs, further surgery may be needed to remove the bone piece or implant.

A New Way to Restore Form and Function

In the new approach, described in an article in the June 2014 issue of the journal Neurosurgery, surgeons pull back only the top three layers of the five-layer scalp, thereby sandwiching the bone or implant in between.

The researchers say this innovation not only prevents possible brain or dural injury, but also reduces the infection risk by providing the delicate bone or implant access to blood supply both from the top and the bottom.

“Everyone has been taught for 120 years to completely peel up the scalp,” says study leader Chad R. Gordon, D.O., a craniofacial surgeon and assistant professor of plastic and reconstructive surgery at the Johns Hopkins University School of Medicine. “But by not disturbing the brain, we can get our patients much better outcomes. 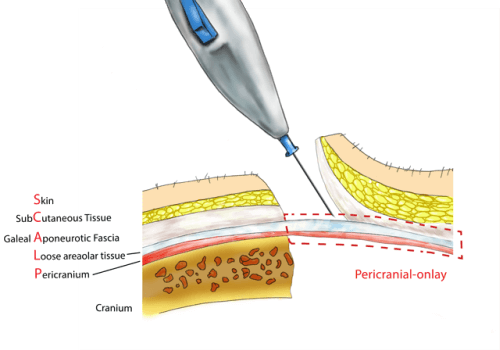 For the study, the research team, which included several Johns Hopkins neurosurgeons, treated 50 patients using the new technique between July 2011 and June 2013. Only one patient developed a deep infection requiring bone removal.

"This is a safer, simpler way to do a very complex surgery," Dr. Gordon notes.