What is a brain aneurysm? 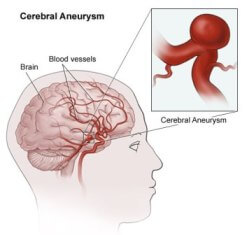 A brain aneurysm (also called a cerebral aneurysm or an intracranial aneurysm) is a bulging, weakened area in the wall of a blood vessel in the brain, resulting in an abnormal widening or ballooning greater than 50 percent of the normal diameter (width). An aneurysm may occur in any blood vessel, but is most often seen in an artery rather than a vein.

Although patients with aneurysms are born with a weakness in one or more spots of the arteries in the brain, it takes many years for aneurysms to grow. An aneurysm grows because the pounding of the blood in this weak spot expands the sac.

If the expansion of the aneurysm reaches a point where the wall becomes too thin, the aneurysm will rupture and bleed into the space around the brain. This event is called a subarachnoid hemorrhage (SAH).

SAH is bleeding into the subarachnoid space (the space between the brain and the membranes that cover the brain). A ruptured cerebral aneurysm is the most common cause of SAH. SAH is a medical emergency and may be the cause of a hemorrhagic (bleeding) stroke.This catastrophic event requires immediate and urgent medical attention.

Symptoms and Causes of Brain Aneurysm

The symptoms of an aneurysm may resemble other medical conditions or problems. Always consult your physician for more information.

Although a cerebral aneurysm may be present without symptoms, the most common initial symptom of a cerebral aneurysm is a subarachnoid hemorrhage (SAH). Other symptoms that may occur with aneurysms in the brain, and their causes may include, but are not limited to, the following:

The symptoms of an aneurysm may resemble other medical conditions or problems. Always consult your physician for more information.

Diagnosis of a Brain Aneurysm

The type of diagnostic testing performed depends on the location of the aneurysm. In addition to a complete medical history and physical examination, diagnostic procedures for an aneurysm may include one or more of the following tests:

At Johns Hopkins, we treat brain aneurysms using one or more methods, depending on the type of aneurysm and the individual patient's situation. Treatments may include:

Specific treatment will be determined by your physician. Twenty percent of aneurysm patients have multiple aneurysms, often on opposite sides of the brain. Traditionally, surgeons perform two separate operations, one for each side of the brain. Dr. Rafael Tamargo, director of the Johns Hopkins Cerebrovascular Center, is among a handful of surgeons worldwide to use a one-surgery, contralateral approach.

The Johns Hopkins Cerebrovascular Team evaluates each aneurysm patient to decide the best singular therapy or treatment combination (clipping or coiling) for the patient’s specific case. Johns Hopkins is one of the few hospitals in the country that treats more than 100 aneurysm cases a year (Dr. Tamargo and Dr. Huang treat an average of about 200 aneurysm cases a year). We have published our aneurysm treatment results, which rank among the best in the world.

For more information, contact the Johns Hopkins Cerebrovascular Center at 410-955-2228.