Google IPEX. The first name that pops up is IPEX, Inc., a company that provides industrial products in Canada. Next comes IPEX World, a resource for the global print industry. Wikipedia tells you that IPEX may refer to the Italian Power Exchange, a Swedish pharmaceuticals company—or Immunodysregulation polyendocrinopathy enteropathy X-linked syndrome, an auto-immune disorder that’s so rare, it’s called an “orphan disease.” 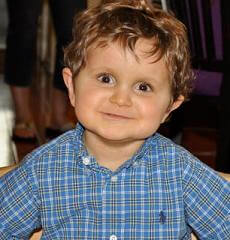 When Tanner’s parents learned their infant son had IPEX, he was only the fiftieth documented case in the world. Untreated, children born with IPEX die by the age of two. Fortunately Tanner was at Johns Hopkins Hospital, where he was seen by one of the few doctors with expertise in the rare disease.

Nowadays Tanner is an active, rambunctious, two-year-old boy who loves to play and laugh. At home he fills the house with his own personal brand of Tanner happiness, chattering and singing, greeting everyone he meets with shining eyes and a contagious smile. A year ago, his parents weren’t even sure he would survive. Tanner was a puzzle, requiring an entire team of nurses and physicians to solve.

When Tanner was born, he was a beautiful baby with lovely, clear skin. Six weeks later he came down with a rash that spread from his face to his entire body. By the time he was four months old, he was no longer gaining weight. Meanwhile his pediatrician struggled to understand what was wrong. Perhaps Tanner suffered from allergies, or eczema. His mother, Kim, who was nursing, carefully removed every food from her diet that might affect her baby: dairy, eggs, wheat. She and her husband, Rick, tried putting the baby on formula. Nothing helped. Finally the pediatrician told the family to take Tanner to Hopkins.

That first admission lasted 84 days as the doctors raced to find a reason for his symptoms. They ran one test after another, coming up empty handed. Meanwhile Kim and Rick took turns staying with Tanner in what they called his “hospital home,” meeting for dinner in the hospital cafeteria as they changed shifts. Finally, a doctor suggested IPEX. They sent a blood sample to the West Coast for processing, then waited eight weeks for the results to come back. The test was positive. “It was good to know what was wrong,” Kim says. “But the news was devastating to hear.”

IPEX causes the body’s regulatory T-cells to malfunction. The immune system mistakenly attacks tissues and organs, leading to rashes, allergies, and infections. Untreated, the disease can lead to diabetes, as well as kidney and liver damage. In Tanner’s case, the disease had ravaged his intestines, leaving him unable to absorb food. Fortunately his diagnosis was made relatively early, and soon the family was preparing him for a bone marrow transplant, the most effective treatment for the disease.

Bone marrow transplants are not without risk. Patients may suffer from severe infections and other complications. IPEX is so rare, Tanner would be only the second child at Johns Hopkins to undergo this treatment for it. In preparation, he received both chemotherapy and radiation. Fortunately the Pediatric Bone Marrow Transplant Program was able to use Kim as a match for her tiny son, speeding up the process; if not, the family would have had to search the bone marrow bank for a donor. Once again Tanner was hospitalized, this time for five weeks, as Kim and Rick took turns at his bedside. Even after Tanner was released, he couldn’t go home. Instead, the family took up residence in a nearby apartment so that they could rush their baby immediately to the ER if he developed a fever. “After a transplant,” Kim explains, “infections are serious threats. Even thirty minutes can be a matter of life or death.”

The transplant gave the family hope, but after a few months the transplanted bone marrow was rejected and his symptoms returned. It became clear that Tanner would need to undergo bone marrow transplantation a second time. Kim and Rick joined forces to shepherd their son through the process again, and after months of waiting, Tanner finally returned home.

“Tanner has a lot of catching up to do,” Kim says. “For a long time, he was so sick, he had to devote all of his energies to getting better.” Now he’s thriving, eating on his own, running, playing, busy developing independence. Kim looks forward to the day when her little boy will join other children at nursery school, his illness firmly behind him. She still remembers the first time she took him outside to walk on the grass. “After all those months in the hospital,” she says, “he just loved being outdoors. He squeals with happiness anytime we take him out.”

“If Tanner had been born a generation earlier,” Kim says, “he would not have survived. If he’d been born in another part of the world, he might not have survived either.” The health of their son, Kim and Rick say, is the result of a group effort. They gratefully acknowledge the many people who gave so much to make his recovery a success, from the Believe in Tomorrow Children’s Foundation that provided them with housing while Tanner was undergoing his transplants, to Kim’s sister, and all their friends and family who stepped forward with amazing support.

Mostly they are thankful for the hospital where he received his care. “I don’t know if Tanner would be around if it weren’t for Hopkins,” Kim says simply. She ticks off the doctors who joined together to diagnose and treat her baby: pediatricians, dermatologists, geneticists, allergy, immune, and GI specialists, as well as the pediatric oncologists who brought him through the bone marrow transplant process—twice.

Just recently Kim finally unpacked her bag—the one she kept ready in case she needed to run to the hospital with Tanner at a moment’s notice. “It’s nice,” she says with a laugh, “not to be living out of a suitcase anymore.” She pulls Tanner onto her lap, where he giggles and wraps his arms around the neck of his Mama. IPEX may be an orphan disease, but as far as Kim and Rick are concerned, the illness has only extended Tanner’s family. For Tanner and his family, Johns Hopkins will always feel like home.