Menu Search
Menu
In This Section

Clarissa was too young to remember the first time she was treated for cancer, but she has vivid memories of the time, ten years later, when the cancer returned. She and a friend were in New York City with their moms, celebrating their upcoming thirteenth birthdays, when it became clear that Clarissa was gravely ill. Her mom, Chris, rushed her home to their pediatrician to hear, “Go immediately to the Johns Hopkins ER! They’re expecting you.” 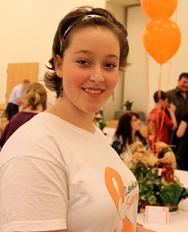 Clarissa’s leukemia, a form of ALL that is normally highly curable, had relapsed. The family was devastated. Clarissa recalls her parents crying when they heard the news. They had been about to embark on a cruise for the 50th anniversaries of both sets of Clarissa’s grandparents. Instead they were headed for a very different kind of journey.

The first time, Clarissa had been treated in Pennsylvania. Now living in Maryland, she would be treated at Johns Hopkins. The family quickly adjusted to the new routine. Either Clarissa’s mother or her father, Paul, would stay in the hospital with Clarissa when she was an in-patient, while the other cared for Clarissa’s younger brother, Erik, at home. One of the most reassuring things about being at Hopkins, Chris says, was having the confidence that everything was being done for the optimal good of her child. She recalls one of Clarissa’s doctors running into the OR, sweating and out of breath, to spare her an unnecessary invasive procedure. Another time a world-class surgeon was ready in a matter of hours when Clarissa needed it. “Somebody moved a mountain to help us,” Chris says.

Throughout the long course of Clarissa’s treatment, the doctors were excellent at communicating the next step. “I always knew how to put the next foot forward,” Chris says. “Treating cancer is just as much of an art as a science and the doctors were true artists!” For Clarissa, the doctors, nurses, and staff became a second family. “When I came in for chemo,” she says, “I looked forward to seeing my nurses. Despite everything, they made the hospital a happy place.” As a parent, Chris could never quite relax her vigilance. But the staff worked with her, reassuring her that it was her role to be “Mama Bear.”

Now, her treatments completed, Clarissa is a Girl on a Mission. An 11th-grader at Mt. Hebron High School in Maryland, she has made it her goal to help other teens with cancer. She remembers once being the only girl her age on the inpatient floor, and how isolating that felt. For two years she was homeschooled, often losing track of friends, missing the fun stages of starting high school. “Teenagers like to be understood,” Clarissa says. “It’s important to know someone else is going through the same thing as you are.” She has started a blog for teens with cancer (www.teen-cancer.com) and ultimately plans on writing a book. “I want to provide a place where other teenagers can read about somebody who is like them, so they don’t feel alone.” She will uniquely provide the wisdom and perspective of someone who, as she says, “knows what’s coming, and can help them deal with the emotions they feel.”

Beautiful and vivacious, Clarissa projects a picture of radiance and confidence. She likes to wear colorful, dangly earrings that dance when she talks. Her recovery from cancer, as it turns out, changed her in unexpected ways. Normally shy, she gave a speech at her end-of-treatment party that was well received. Soon she found herself speaking at events to raise awareness for pediatric cancer throughout the Maryland area. At one occasion, a little girl asked for a picture of the two of them together. “You are my role model!” the girl exclaimed. “I realized I could bring hope to others,” Clarissa says. “I had never had anything in my life before where I could make a difference and have an impact on others. Now I could do something important, just by telling my story.”

Clarissa is busy thinking ahead to college. She plans on becoming a doctor, and is pursuing an internship at Johns Hopkins with one of her former physicians, doing research on the disease that has had such a profound affect on her life. “I love being back at school,” she says. “Once I got going, it felt natural again.” Parents Paul and Chris beam with pride when they look at their daughter. Clarissa is one we should all be keeping an eye on. Her story has only just begun.