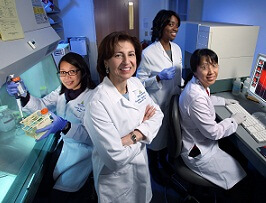 Melanoma patients seeking care at Johns Hopkins receive the highest standards of care with the latest technologies mastered by skilled experts in the Melanoma Program. Importantly, beyond conventional care, patients also have access to emerging therapies for melanoma that are generated by research discoveries from Johns Hopkins laboratories. Our clinical research programs offer studies for patients with both early- and late-stage melanomas, and focus on preventing disease recurrence in high-risk surgical patients as well as developing innovative therapies for patients with advanced metastatic disease.

Our medical and surgical oncologists also collaborate with melanoma research partners around the world, including academic medical centers, cooperative inter-institutional research groups, and pharmaceutical firms, to conduct clinical trials involving the latest advances in melanoma therapy. Melanoma research experts at Johns Hopkins are at the forefront of developing the next generation of therapies and diagnostic tools.  Ongoing clinical trials are described in more detail in our Clinical Trials section.

Immunomodulatory monoclonal antibodies – A key ingredient in the development of melanoma is the ability of cancerous cells to evade the body’s natural defenses against foreign and diseased cells. Johns Hopkins scientists are studying how to educate the immune system to recognize and kill melanoma cells in a variety of ways, including arming T cells with specific capabilities in detecting melanoma. Hopkins scientists have performed pioneering research on “co-inhibitory” molecules expressed by T cells that can bind to molecules such as B7-H1 expressed by melanoma cells; such interactions can turn off immune responses and hence aid tumor cells to escape immune recognition. In collaboration with industrial partners, therapies to block these interactions are currently in clinical testing and have yielded promising early results. Two clinical trials led by Johns Hopkins Kimmel Cancer Center researchers in collaboration with other medical centers, testing experimental drugs aimed at blocking the B7-H1/PD-1/PD-L1 pathway, have shown promising early results in patients with advanced non-small cell lung cancer, melanoma, and kidney cancer.  More than 500 patients were treated in the studies of two drugs that target this immune-suppressive pathway, and the investigators say there is enough evidence to support wider testing in larger groups of patients. The investigators say the treatment is safe, shrinks some tumors and a marker they identified may predict response.  Read more.

Anti-PD-1: A Novel Immunotherapy -A key factor in the development of melanoma is the ability of cancerous cells to evade the body’s natural defenses against foreign and diseased cells. Johns Hopkins scientists are studying how to educate the immune system to recognize and kill melanoma cells in a variety of ways, including arming immune T cells with specific capabilities in detecting melanoma.

Researchers at Johns Hopkins Kimmel Cancer Center are leading the way in developing novel immunotherapies called anti-PD-1 and anti-PD-L1 for people with advanced melanomas. The therapies aim not to kill cancer cells directly but to block a pathway that shields tumor cells from immune system components able and poised to fight cancer. Read more about Anti-PD-1.

Melanoma vaccines – Melanoma vaccines are designed to boost the immune response and enable the patient’s immune system to recognize and destroy melanoma cells. The Hopkins Melanoma Program has developed a new vaccine for clinical testing, based on genetically engineered irradiated melanoma cells expressing several different melanoma proteins simultaneously and secreting the immunostimulatory molecule GM-CSF (“Melanoma GVAX”).  A recently completed Phase I clinical trial indicates that this vaccine is safe and feasible to administer in the outpatient clinic.  Further studies are aimed at developing more powerful “next generation” Melanoma GVAX.

Read more about immunotherapy and new research in our magazine, Promise & Progress

BRAF gene - Approximately 60 percent of melanomas contain a specific mutation in the BRAF gene, which involves a substitution of one of the chemical bases or nucleotides (adenine, thymine, cytosine, and guanine) that make up DNA. The order in which these nucleotides occur determines the information that genes communicate to cells for manufacturing new proteins, much like specific letters of the alphabet combine to form words and sentences. In the case of BRAF, a single coding error among more than 2000 nucleotides in the gene causes the BRAF protein to be stuck in the “on” position, making cells continuously grow and divide, ultimately to become cancerous. Johns Hopkins researchers are developing blood tests to find this mutation in the DNA shed from dead tumor cells. In collaboration with pharmaceutical companies, they also are evaluating drugs that can block abnormal signaling caused by the common BRAF mutation in patients with advanced metastatic disease, and new treatment strategies designed to prevent tumor resistance or recurrence after this form of treatment.

C-KIT gene - C-Kit is a cancer-promoting gene that is modified or over-expressed in certain forms of melanoma, including acral and mucosal melanoma. Johns Hopkins melanoma researchers are involved in clinical trials designed to test several new drugs directed at this genetic abnormality.

Melanoma in Young Patients – Johns Hopkins surgical oncologists have conducted one of the largest review studies of outcomes in young patients with melanoma, published in the prestigious Journal of Clinical Oncology. They collected information on approximately 3,000 patients from the National Cancer Database, including demographics, presentation of disease and outcomes. This information may help define unique characteristics of these patients to suggest better methods of preventing, diagnosing and treating melanoma in young individuals.

Treatment Disparities – In a review of more than 10,000 melanoma patients, Johns Hopkins researchers found that geography often determines whether patients receive sentinel lymph node (SLN) biopsy or biological therapy after surgery. Certain types of insurance and hospitals are also more frequently associated with these treatments, which are potentially important in overall survival. The Hopkins researchers sifted through data collected by the National Cancer Data Base from 1994 to 2003, finding that patients treated at hospitals in the Mountain region of the United States were most likely to have a standard SLN procedure for locally invasive melanoma, while those treated at New England hospitals and those in the West North Central region (from Kansas to Nebraska) were more likely to receive biologic therapies, including interferon. It is not clear why some of these treatment differences exist, but such information may provide important guidance for health care providers and policy makers.

Melanoma investigators at Johns Hopkins lead large international cooperative studies designed to better define features of melanoma, based on pathology and clinical characteristics, which can be used to predict survival outcomes of melanoma patients. This large collaborative effort involving melanoma investigators of all disciplines studying over 30,000 melanoma patients, led to further refinements in the melanoma staging system as published in the Journal of Clinical Oncology in 2010.