Roger Tuck, an engineer and grandfather of three young grandchildren, underwent surgery to treat an infection in the heel of his foot caused by Diabetes. 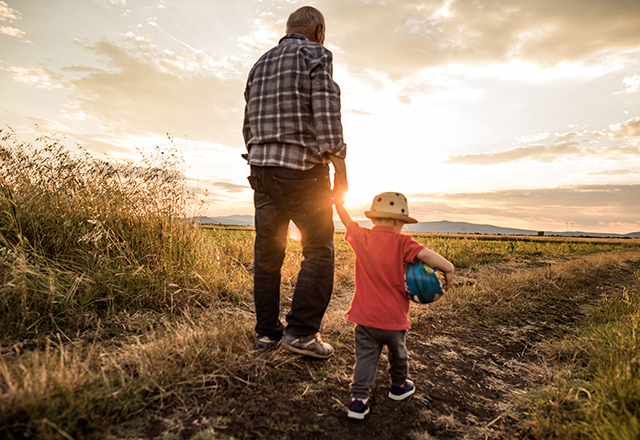 Roger Tuck, an engineer and grandfather of three young grandchildren, was always busy and on-the-go. While cleaning his pool, in the summer of 2019, he injured his foot leaving a large wound on his left heel. Roger spent the fall waiting for recovery and relief but by January 2020 the pain in his foot became unbearable. The wound on the bottom of his left heel became infected, a complication of diabetes. His podiatrist immediately referred him to the multidisciplinary Diabetic Foot and Wound Service at Johns Hopkins for treatment by podiatric surgeon Ronald Sherman.

Roger recalls his first visit with the foot wound care team, “Dr. Sherman took one look at my foot and said I was going to need to be admitted to the hospital. The next morning, I was in surgery.”

As he recovered in the hospital following surgery, his care team attentively made sure there were no blockages in his arteries that could lead to further complications and ensured that Roger had proper circulation in his foot.

Occupational therapist Lourdes Filipi constructed a specialty splint to protect the surgical site and allow it to heal properly during his recovery. Roger was also under the care of an endocrinologist who helped manage his diabetes during his stay at the hospital. After about one week, he was discharged to recover at home.

Adapting Care during a Pandemic

When the COVID-19 pandemic began in the United States, Johns Hopkins Medicine quickly adapted so that patients could continue receiving the care they need, whether it be in-person, at home or by virtual visits. For Roger, that meant being assigned a home care nurse, through Johns Hopkins Home Care Group program, who would provide necessary care and follow-up at his home.

“I was very impressed by the home care nurse. She would check my foot and my bandages and would send the information to Dr. Sherman,” Roger recalls. Toward the end of Roger’s recovery, he slipped and injured his right ankle. He was able to quickly connect with Dr. Sherman during a remote video visit to assess the situation.

“Five months after the surgery, I was completely healed,” Roger says with excitement. “The whole Diabetic Foot and Wound Care team including Dr. Sherman, vascular surgeon Christopher Abularrage and [certified wound care nurse] Priscilla Frost, was tremendous. I couldn’t have asked for anything better.”

The Johns Hopkins Multidisciplinary Diabetic Foot and Wound Center of Excellence is a comprehensive, inpatient and outpatient, multi-specialty aimed at healing the recurrent ulceration and decreasing rate of major amputations in diabetic patients.

Our surgeons at the Johns Hopkins Vascular Surgery and Endovascular Therapy division provide treatment and care for patients diagnosed with circulatory conditions.
back to top button