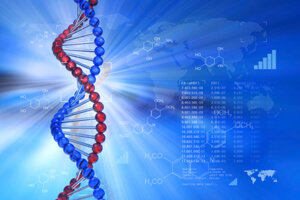 ARVD/C is a genetic, heritable condition where an affected person has a chance of passing on a specific gene change to his or her children. There is also some evidence that ARVD/C could result from an infection of the heart muscle.

How does a genetic mutation cause ARVD/C?

ARVD/C is often caused by mutations in the desmosomal proteins. The desmosome is the mechanical bridge that links one heart cell to the next. The major components of the desmosome are:

Patients with ARVD/C are commonly found to have genetic abnormalities in the genes that encode for these desmosomal proteins. When there is a mutation in these genes the mechanical bonds that hold heart cells together are defective. Over time, the heart cells can pull apart, starting a process of scar and fat replacement. This can be increased with a high level of exercise, which explains why it appears to be common among young athletes.

ARVD/C is still being studied. It is possible that there are other causes, such as viral infections. There is a great deal of research on the mechanisms and we expect to learn more in the next five to ten years.

If I have the gene change, do I have ARVD/C?

In general, someone who inherits a gene change or mutation for ARVD/C has inherited a genetic predisposition to developing ARVD/C. A single gene change is usually not sufficient for the development of ARVD/C. We think that for most individuals, additional factors such as other genes, athletic lifestyle, exposure to certain viruses, etc. are needed for an individual to actually develop signs and symptoms of ARVD/C. This is an area of very active research and we have a lot to learn about all the factors that can cause ARVD/C.

To help explain the inheritance of ARVD/C, let us back up and explain some concepts of biology. Our bodies are made up of cells and in the nucleus of each cell is DNA. The DNA is a string of messages that we call genes. Genes are like sentences in that certain letters are put together to make a code that are the instructions for telling our bodies how to look and function. If a letter or letters from a sentence or missing or added in the wrong place, the genetic sentence will not make sense and can result in genetic disorders like ARVD/C.

The genetic basis of ARVD/C is complex and not fully understood. There are several different patterns of inheritance observed in ARVD/C which are described below.

In autosomal dominant inheritance, a person with a gene change predisposing them to ARVD/C has a 50% chance of passing on that same predisposition to their child. We know that not everyone who inherits a gene change associated with ARVD/C will develop ARVD/C. This is called “reduced penetrance.” Among people in a family who get ARVD/C there is variation in the severity of the disease and the age that ARVD/C starts. We are working hard to figure out what genetic and other factors predict which people with a genetic change go on to develop ARVD/C.

In autosomal recessive inheritance, an individual has to have two copies of a gene associated with ARVD to get the disease. A person has a 25% chance of inheriting both copies of the gene changes responsible for ARVD (one from dad and one from mom). Each parent “carries” a gene change but does not have ARVD. This type of pattern is seen in Naxos disease, a variant of ARVD predominantly seen in Greece. Autosomal dominant appears to be the most common pattern of inheritance.

Further complicating the understanding of an inheritance pattern in some families is the presence of more than one gene change. In some families, the individual who carries the diagnosis of ARVD/C may be found to have 2 different gene changes in the same gene (ie PKP2). This is called compound heterozygosity. Sometimes individuals with ARVD/C can have gene changes in more than one gene (ie PKP2 and DSG2). This is referred to as digenic inheritance. In these situations, it is difficult to provide specific risk information to family members if they inherit only one of these gene changes because these same gene changes have also been observed alone in other individuals with ARVD/C.

What genes are associated with ARVD/C?

Changes in the following 7 genes have been associated with ARVD/C. The locus or the specific location of the gene on a chromosome, as well as the prevalence of mutations in each gene where known is also shown.

Is there a genetic test for ARVD/C?

Several laboratories both within the United States and worldwide, offer clinical genetic testing for many of the ARVD/C-associated genes. The laboratories offering these services vary in price, number of genes screened, and technology used. Clinical genetic testing is available for the following ARVD/C-associated genes. Mutations in these 7 genes account for ARVD/C in 40-50% of patients screened.

To request an appointment with the Johns Hopkins ARVD/C Program, please contact Crystal Tichnell, MGC at 410-502-7161 or ctichnell@jhmi.edu.

If you are interested in finding out more about genetic testing options for ARVD/C, please contact one of our genetic counselors at 410-502-7161 for more information or to schedule an appointment. We are happy to work with you, your physicians, and your insurance company in understanding the risks, benefits, and limitations of genetic testing in your specific situation. There are many research laboratories that offer testing on a research basis, however, many of these labs are unable to provide results or require clinical confirmation of a research result.

The Johns Hopkins ARVD Program, as well as the electrophysiology professional societies, strongly recommend that patients meet with a genetic counselor prior to any testing to discuss the benefits, risks, and limitations of genetic testing. Interpretation of genetic test results for ARVD/C can be quite complex. Genetic counselors can be found through the National Society of Genetic Counselors.

To request an appointment with the Johns Hopkins ARVD/C Program, please contact Crystal Tichnell, MGC at 410-502-7161 or ctichnell@jhmi.edu.