Courtney West didn’t know that she had a potentially fatal heart condition until her brother, Jacob, died suddenly during a football practice from sudden cardiac arrest (SCA) in 2013.

Jacob was a multisport athlete who’d had several school physicals, none of which showed any problems. “We were completely blindsided,” says Courtney. 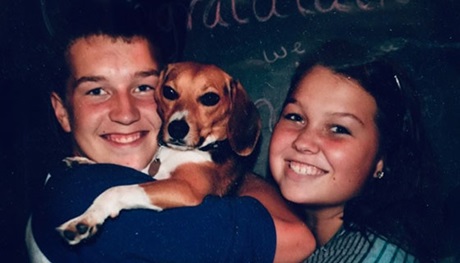 After Jacob’s death, doctors suspected it was due to a genetic heart condition. Courtney began an extensive testing process. She had multiple arrhythmias (abnormal heart rhythms) during a stress test, which led to a diagnosis of ARVC (arrhythmogenic right ventricular cardiomyopathy), a progressive genetic disease of the heart muscle.

Courtney has received care from Johns Hopkins Medicine, which has one of the top programs in the United States for treatment and management of this rare heart condition.

“My first visit at The Johns Hopkins Hospital was life changing, because I hadn’t had an experience before where I walked into a medical space and everyone understood exactly what I was going through,” says Courtney. “It made me hopeful for the first time since being diagnosed.”

Among the practitioners Courtney sees are Harikrishna Tandri, M.B.B.S., Hugh Calkins, M.D., Brittney Murray, M.S., and Crystal Tichnell, M.G.C. This incredible team works closely with the SADS (Sudden Arrythmia Death Syndrome) Foundation, a patient advocacy nonprofit organization. Its mission is to save the lives and support the families of children and adults who are genetically predisposed to sudden death due to heart rhythm abnormalities such as ARVC.

Knowledge is power with ARVC, and having that knowledge alleviates stress.

Courtney and her family are spreading awareness about SCA and what bystanders can do to save a life when a cardiac emergency occurs, including knowing where the closest AED (automated external defibrillator) is, making sure its batteries are charged and knowing how to use it.

“When my brother had his SCA, there was no AED on the field,” Courtney says. “And that could have saved his life. My family lives with that knowledge every day — that Jacob might be here today, a happy 26-year-old, if only an AED had been on the field. There is no wrong place for an AED.”

She wants others with conditions like ARVC to know that the most important thing is connecting with experts such as those on the Johns Hopkins ARVC team.

“Knowledge is power with ARVC, and having that knowledge alleviates stress,” she says. “Having a team who can help on your journey can bring you that power.”

Since 1999, our center has provided education, evaluation, treatment and research programs for patients with known or suspected ARVD/C.

Learn more about the ARVD/C Program