When you cook at home, you know what’s in there. You can make nutritional room for the saturated fat in the cheese by using an egg white instead of a whole egg to dip the cutlets. 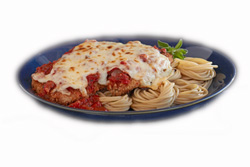 Using no-salt-added tomatoes offsets some of the salt in the cheese.

Heat olive oil in a heavy pot. Add onion and sauté until transparent. Add garlic and stir. Add tomatoes and herbs. Bring sauce to bubbling and turn down heat to simmer. Let cook, stirring occasionally, until it begins to thicken, while you prepare the rest of the ingredients.

If you’re making the sauce in advance, cook for about 45 minutes to an hour, then refrigerate. You’ll need 2 cups for your chicken; the rest can be frozen.

*If you buy the chicken as 2 skinless breasts, cut each breast in half lengthwise. Put chicken between 2 sheets of waxed paper and pound to make it evenly thick, about one-half to three-quarters of an inch.

Spread some panko on waxed paper. Cover the cutlets with panko, pressing the crumbs into the chicken.

Remove dish from oven and sprinkle with shredded mozzarella. Return dish to oven for 5 minutes and turn off the heat. The cheese doesn’t need to cook, just melt. Serve with whole wheat thin spaghetti and a salad.