The Gift of Hearing: The Huegel Family Story

The Huegel family was eight hours into a family trip from their home near Baltimore to Michigan when 14-month-old Greta spiked a fever and began grabbing her ears. She was coming down with another ear infection. With no antibiotics to give her daughter, Tracy could only think of one thing to do: Call Johns Hopkins. 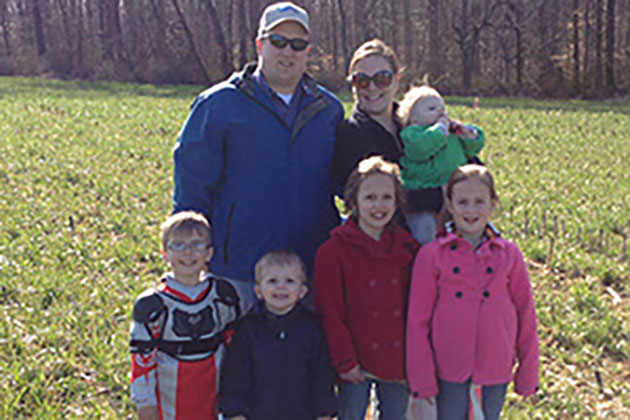 The Huegels had come to know Johns Hopkins quite well over the previous eight years. Tracy and Josh both carry a recessive genetic mutation of the Connexin 26 gene, and each of their children was born with a 25 percent chance of being deaf. However, for the Huegels, four of their five children were either born deaf or became deaf at an early age. At the Johns Hopkins Cochlear Implant Center, surgeons performed cochlear implantation surgery on each of the Huegel’s four deaf children.

Tracy contacted The Cochlear Implant Center and the surgeon coordinated to find a pharmacy that was on the family’s way to Michigan, and he called in a prescription.

“It was really nice to have that connection with our team and for them to be a phone call away,” Tracy said. “If there’s an emergency, they're there to help us.”

The Road to Hopkins

The Huegel’s journey to Johns Hopkins began in 2004 when Tracy became concerned about their first-born, Rebecca. She wasn’t responding to her name, could be easily startled, and didn’t react to the noise of her mom vacuuming in her nursery.

By the time she turned 1, Rebecca had been diagnosed as profoundly deaf in both ears. This was the first time Tracy and Josh heard about the cochlear implant. After going to Johns Hopkins for a second opinion, the diagnosis was confirmed. Josh's deep research showed a long track record of innovation and successful patient outcomes at Johns Hopkins and the Heugels decided this was the best place for their daughter’s care. When Rebecca was 15-months old, surgeons performed a cochlear implantation on her right ear.

After recovering from surgery, patients come back to Hopkins to have their implant activated by an audiologist. As 15-month-old Rebecca sat in her mother’s arms, playing with a box of blocks, the technologist activated the implant. Suddenly, Rebecca stopped playing. She looked up at her mother, touched the implant site, paused, and went back to playing. Rebecca could hear for the first time since she was a newborn.

After their second child, Jane, was born with no hearing difficulties, the Huegel’s have been regular visitors of The Cochlear Implant Center as each of their next three children failed their newborn hearing tests and required cochlear implants.

Today, with hearing in both ears, Rebecca is like any other 3rd grade girl who also happens to be an expert helper at getting her younger siblings to ‘put their ears on’ in the morning.

“I rely on Rebecca,” Tracy says. "If a sitter has questions, (I say) 'Ask Rebecca.' They look out for each other.”

As Tracy sits at her kitchen table with five young kids on a stormy summer morning, it is a typical American family scene. Kids are laughing and playing, arguing and tattling. Topics range from where the Jolly Ranchers came from to whether the dress-up shoes belong to Rebecca or Jane.

“They argue like every other family,” Tracy says with a smile, knowing that this fun, hectic household wouldn’t be the same without cochlear implants.

As she relives the experiences with each of her kids, Tracy reflects on how lucky she feels that she lives so close to Hopkins.

“They have outstanding doctors that work with you,” she says. “They have a very good connection with their families. Their bedside manner is out of this world. From the time that you go in there, they are very comforting.”

“We take our responsibility of the treatment of these children very seriously,” their surgeon said. “We recognize that sometimes we’re the only thing that stands between a child being linked into the hearing world and being completely isolated from the hearing world. This is our calling.”

I am so lucky that I live so close. I am so thankful for where I am and who I'm dealing with."