If you have been diagnosed with a heart arrhythmia — a problem with the rate or rhythm of your heartbeat — your doctor may recommend a procedure called catheter ablation to improve your condition.

Also known as a cardiac ablation or radiofrequency ablation, this procedure guides a tube into your heart to destroy small areas of tissue that may be causing your abnormal heartbeat.

Catheter ablation can take between two and four hours to complete. The procedure is done in an electrophysiology lab where you will be monitored closely.

Before the procedure begins, you will be given intravenous medications to help you relax and even fall asleep. In some cases, you may be put to sleep by an anesthesiologist.

After the medication has taken effect, your doctor will numb an area in your groin and make a small hole in your skin. Then, the doctor will place three or four catheters through blood vessels to your heart to help guide the procedure.

After the catheters have been placed, electrodes at the ends of the catheters are used to stimulate your heart and locate the area that is causing the abnormal heart rhythm. Then, the doctor will use mild radiofrequency heat energy to destroy or “ablate” the problem area, which is usually quite small — about one-fifth of an inch in size. Other types of ablation techniques may be used, such as cryoablation, in which very cold temperatures destroy the problem area. Your doctor will decide which type of ablation therapy is most appropriate for you. Once the tissue is destroyed, the abnormal electrical signals that created the arrhythmia can no longer be sent to the rest of the heart.

Most people do not feel pain during the procedure. You may sense mild discomfort in your chest. After the ablation is over, your doctor will remove the guide wire and catheters from your chest. 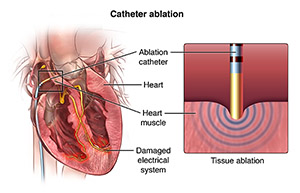 After the catheter ablation, you will probably need to lie still for two to six hours to decrease the risk of bleeding. Medical staff members may apply pressure to the site where the catheter was inserted. Special machines will monitor your heart as you recover. Some people can go home the same day as the ablation, but others will stay in the hospital for one or more nights.

Managing After a Catheter Ablation

Recovery from catheter ablation is usually fairly straightforward. In the days after the procedure, you may experience mild symptoms such as an achy chest and discomfort, or bruising in the area where the catheter was inserted. You might also notice skipped heartbeats or irregular heart rhythms. Most people can return to their normal activities within a few days.

Contact your doctor immediately if you have unusual pain or swelling, excessive bleeding or consistent irregularities in your heartbeat.

Depending on the type of arrhythmia being treated, catheter ablation can have a success rate of more than 90 percent, but some people may need to have the procedure again or other treatments for heart arrhythmias. Your doctor may want you to remain on medications to help control your heartbeat.

After the catheter ablation, be sure to follow all instructions from your doctor, especially regarding follow-up visits, medication schedules and safe levels of physical activity.