Cancer is when cells in the body change and grow out of control. To help you understand what happens when you have cancer, let’s look at how your body works normally. Your body is made up of tiny building blocks called cells. Normal cells grow when your body needs them, and die when your body does not need them any longer.

Cancer is made up of abnormal cells that grow even though your body doesn’t need them. In most cancers, the abnormal cells grow to form a lump or mass called a tumor. If cancer cells are in the body long enough, they can grow into (invade) nearby areas. They can even spread to other parts of the body (metastasis).

What is nonmelanoma skin cancer?

Skin cancer is a disease that begins in the cells of the skin. The area of skin with the cancer is often called a lesion. There are several types of skin cancer (carcinoma). Melanoma is the most serious. But there are others that are known as nonmelanoma skin cancer. These include: 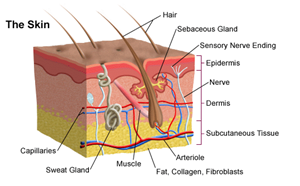 The skin is the largest organ of the body. Skin protects us from heat, sunlight, injury, and infection. It also stores water and fat, and makes vitamin D. The skin has 3 layers:

The dermis has blood vessels, lymphatic vessels, hair follicles, and glands. Some of these glands make sweat, which helps keep the body cool. Other glands make an oily substance called sebum. Sebum helps keep the skin from getting dry. Sweat and sebum reach the skin's surface through tiny openings called pores.

The subcutis and the lowest part of the dermis form a network of collagen and fat cells. This layer conserves heat and helps protect the body's organs from injury.

What are the different types of nonmelanoma skin cancer?

Basal cell carcinoma, also known as basal cell cancer, is the most common type of skin cancer. It begins in basal cells in the deepest part of the epidermis. It often starts in areas of skin exposed to the sun, such as the face, head, neck, arms, and hands. The cancer lesion often appears as small, raised, shiny, or pearly bumps, but it can have various kinds of appearance. They tend to grow slowly and rarely spread to other parts of the body.

Nearly all basal cell cancers can be treated and cured. In some cases they may come back after treatment. Although this type of cancer rarely spreads to other parts of the body, if not treated it can extend below the skin to the bone. This can cause serious damage to the bone. Having a basal cell carcinoma also puts you at higher risk for other types of skin cancer.

Squamous cell carcinoma, also known as squamous cell cancer, is the second most common type of skin cancer. It begins in flat cells called squamous cells in the upper part of the epidermis. Like basal cell cancer, it often starts in areas of skin exposed to the sun, such as the face, head, neck, arms, and hands. But it can also start in other parts of the body, such as skin in the genital area. Squamous cell carcinoma lesions often appear as a rough or scaly reddish patch on the skin that tends to grow quickly. But it can also have various kinds of appearance.

Merkel cell cancer tumors are most often found on sun-exposed areas of skin, such as the face, neck, and arms. But they can start anywhere on the body. They usually appear as firm, shiny skin lumps that do not hurt. The lumps may be red, pink, or blue. They tend to grow very quickly.

Cutaneous T-cell lymphoma is a type of cancer that starts in blood cells called T-lymphocytes. These are white blood cells that are part of your immune system. They normally fight infection in the body. The cancer then affects the skin (cutaneous). It causes scaly patches or bumps. The cancer is also known as lymphoma of the skin. It is a type of non-Hodgkin lymphoma.

It is usually a slow-growing cancer. It develops over many years. The two most common types of this cancer are mycosis fungoides and the Sezary syndrome.

Talk with your healthcare provider