Hollywood stunt woman, Jill Brown, was diagnosed with a benign convexity meningioma brain tumor and searched for the right doctor and medical team across the country. Watch as she recounts what led her to travel across the country to have her surgery performed at The Johns Hopkins Hospital. 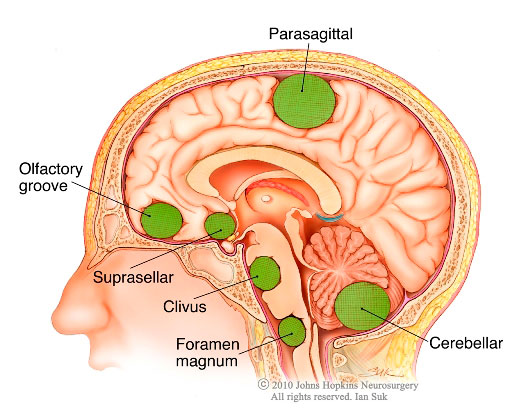 What are the symptoms of meningioma?

If meningioma symptoms occur, they may be very subtle and start slowly as the tumor grows and presses on the brain or spinal cord.

Depending on the meningioma’s size and location, common symptoms may include:

Other, less common symptoms include:

The Johns Hopkins Comprehensive Brain Tumor Center is one of the largest brain tumor treatment and research centers in the world. We tailor each patient's treatment using an array of advanced approaches, including emerging treatments such as tumor-treating fields and MRI-guided laser ablation.

What are the risk factors of meningioma?

Meningioma is about three times more common in women than in men. The tumors are most common in older patients, with the highest rate in people in their 70s and 80s.

The cause of meningioma is not completely understood, but there are some risk factors: