A Devastating Stroke and Life-saving Surgery

As her sister slowly recited the alphabet, the young woman on the bed squeezed her hand, signaling one letter at a time. This was how Maggie communicated now.

Her family, hastily gathered at her bedside, wondered if this would be Maggie’s last message to them as the neurosurgical team hurried to prepare her for emergency brain surgery.

A week before, in December 2014, Colorado native Maggie Whittum seemed to have it all: health, talent, and a bright future. She had directed and performed in Scotland, South Korea, Taiwan, Hong Kong, China and Canada. She was working toward a master of fine arts degree in acting in Washington, D.C., and was engaged to be married.

But then there was the headache, which two days later brought Maggie staggering into a Washington, D.C. emergency room. Like a building wave, her symptoms became more and more terrifying: double vision, numbness, worsening paralysis. Within 48 hours, Maggie couldn’t breathe on her own and needed a ventilator. She’d had a massive hemorrhagic stroke — at age 33.

The cause was a cavernoma, a bulging berry-like abnormality of blood vessels that can cause bleeding. In Maggie’s case, the location of the cavernoma — in a part of her brainstem called the pons—made it particularly dangerous. She was transferred to The Johns Hopkins Hospital, one of the few neurosurgery centers prepared to address such a serious condition.

“She’s remarkable,” says Judy Huang, the Johns Hopkins neurosurgeon who performed the life-saving procedure on Maggie. “The bleeding was in a very delicate part of the nervous system that controls basic functions such as breathing and consciousness.

“So even though she was paralyzed and had a breathing tube in place, she was fully aware of what was happening to her,” explains Huang.

Maggie has only fragmented memories of the days before her surgery, but recalls meeting Huang as the family gathered around for a meeting. “[Huang] talked to me,” Maggie says. “Sometimes people don’t. They treat you like a piece of furniture. But she spoke directly to me.”

Nine hours of surgery later, Maggie was out of immediate danger.

Huang says, “The whole time I’m in the OR, I’m thinking: ‘Here’s a young, talented woman just a few months from getting married, and here we are working in her brainstem.’ When I knew I was able to get the whole [cavernoma] out, that was reassuring — we knew there was less chance of it bleeding again.”

But Maggie’s challenges were just beginning.

Maggie recalls, “I was young and healthy and didn’t really know much about stroke; I didn’t get the gravity of it or realize what I was up against. When I was being discharged from rehab, I was thinking, ‘I’m not moving like I used to. I thought I’d return to where I was.’

“People were telling me that only 10 percent of stroke survivors make it all the way back. But I was determined to do everything I could to be in that 10 percent.

“After the surgery, Dr. Huang didn’t say I’d ‘never’ do any particular thing. But she was clear that my face might not move anymore. My facial nerve was totally destroyed by the hemorrhage. Half my face looked like it was melting, like wax. I was horrified by the way I looked — I wouldn’t look in the mirror.” 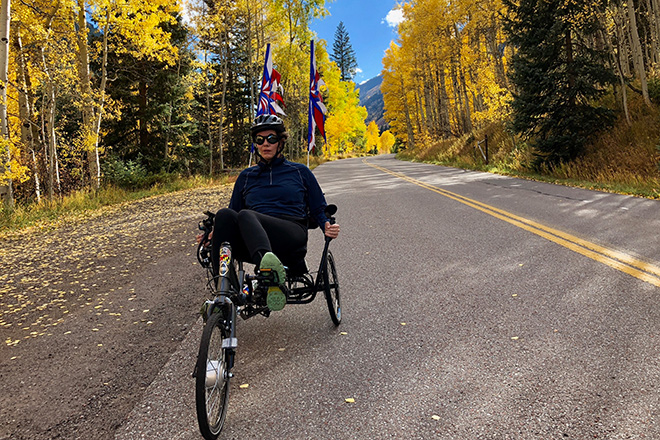 For an actor, facial paralysis can be a devastating loss. When Whittum met with her surgeon at the Center for Facial Plastic and Reconstructive Surgery at Johns Hopkins, she found herself struggling to accept her situation.

“The team was awesome and empathetic, but I was still hoping I’d be better in six months on my own,” she says. “The office put me in touch with another young woman who had undergone a hypoglossal nerve transfer for facial paralysis. I was so glad to speak with her about the experience. It really helped me make the very difficult decision to get the surgery.”

Maggie’s situation was challenging. In many instances of facial paralysis, the plastic and reconstructive surgeon can reanimate the face by moving the fifth cranial nerve.

But Maggie’s fifth cranial nerve was too damaged by the hemorrhage, so the surgeon enacted a plan B of sorts and instead used the 12th cranial nerve, also known as the hypoglossal nerve. Surgeons relocated it to the side of Maggie’s face that was affected by the stroke, and placed a weight in her eyelid so the eye could completely close.

Maggie says, “The facial reanimation surgery went so well and I was so grateful. The care was phenomenal; the people so intelligent.” But she knew the results wouldn’t be immediate, and that restoring her facial balance would take months of therapy and hard work.

Then, another blow: Maggie and her fiancé parted ways. She went home to Colorado. Unable to drive, she wanted to make sure she had access to good public transportation, so she moved to Denver.

On her mind now: resurrecting her career.

Maggie didn't ask for any of this. But she's speaking publicly, performing, and helping others with the same problems. She's coming up with ways to make them laugh, deal with their symptoms. It's a mission-- one with more impact than she imagines."

A New Life and Mission

Years before her stroke, Maggie had seen a unique theater group that made its home in Denver: the award-winning Phamaly Theatre Company. The group comprises actors with various physical, cognitive and emotional challenges.

Maggie contacted them, auditioned, and won a part in a musical production. Soon she was on stage at the Denver Center for the Performing Arts, accompanied by a great cast and a full orchestra.

She was back. Or rather, moving forward.

She says, “Having a stroke is disempowering. You feel shame, grief, worthlessness. I was unable to go back to school and be independent. But getting back on stage was great.”

In the meantime, Maggie has added another role to her repertoire: educating the world on what it means to have your physical ability, looks and life plans derailed by a stroke. She visits Johns Hopkins yearly for a presentation to medical students, residents, and surgeons.

Huang notes that during Maggie’s talk, even some of the toughest doctors are moved to tears.

Huang marvels: “Maggie didn’t ask for any of this. But she’s speaking publicly, performing and helping others with the same problems. She’s coming up with ways to make them laugh, deal with their symptoms. It’s a mission—one with more impact than she imagines.”

The Johns Hopkins Cerebrovascular team cares for a range of cerebrovascular disorders, including emergency stroke and hemorrhage situations as well as long-term monitoring for patients with conditions like a cerebral aneurysm.

About the Cerebrovascular Center