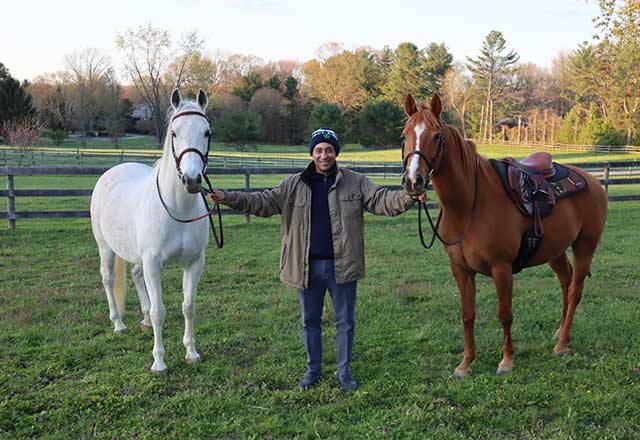 Sammy Eldin, 53, is back home in Howard County after two harrowing weeks battling COVID-19 at The Johns Hopkins Hospital and three days of inpatient treatment for a heart arrhythmia that appears to be COVID-related.

Though he’s still gaining his strength — his wife, Tina, jokes that he circulates from couch to kitchen to dining room and back again — he’s grateful for his improving health and the care he continues to receive.

Admitted March 16 and released March 30, the founding partner of Tricap Investments was one of the first inpatients with COVID-19 at The Johns Hopkins Hospital. Since then, the hospital has treated and released hundreds of patients who had COVID-19 and then recovered from the potentially fatal disease.

“We were still trying to figure out the trajectory of the illness,” says Brian Garibaldi, M.D., a critical care physician specializing in pulmonary disease, and medical director of the hospital’s biocontainment unit. “It was stressful for him as a patient, but also stressful for us as a care team.”

Eldin, who travels frequently for work, flew home to Dulles International Airport on March 8 from a two-week trip to Asia and London. During his travels, he took pains to sanitize his hands frequently, and even avoided food on the flight.

But three days later, he developed a fever, and the following day, March 12, it spiked to nearly 103. Though he did not have the classic COVID-19 symptoms of a sore throat, cough or shortness of breath, Eldin was worried, especially when acetaminophen brought only limited relief.

On March 16, at the urging of his Johns Hopkins primary care doctor Hamid Rabb, M.D., Eldin went to The Johns Hopkins Hospital, checking in at the registration tent set up to provide assessment and care while keeping patients who are potentially infectious safely away from other patients in the emergency department.

After about two hours, he was thinking about going home. But emergency doctor Kamna Balhara, M.D., urged him to stay for further evaluation after an X-ray showed signs of infection in his lungs.

“I’m glad she convinced me to stay,” Eldin says. “If I had gone home and gotten worse over the next several days, I probably would have needed intubation when I returned.”

Eldin was taken to a protected room in the emergency department and a COVID-19 test was performed, which came back positive. He was admitted to one of the first Johns Hopkins Hospital units to be converted to a negative pressure respiratory isolation unit to keep contaminated air from flowing out and posing a risk to other patients and to staff members.

I had a great team of doctors, I can’t tell you how professional, nice and friendly the nursing staff was.

Hospital policy prohibited visitors, but Eldin says he found comfort using a video phone app to keep up with his family, particularly sons Adam, 23, and Zach, 20. “They were quite worried about me,” he says.

The biocontainment measures, while necessary, create barriers for clinicians as well as patients, notes Garibaldi.

“We’re trying to minimize the number of people going into the room and also how much time we spend in the room,” he says, adding that personal protective gear interferes with hearing and touch, and makes smell impossible.

“I had a great team of doctors,” Eldin says, including Garibaldi and internists Romsai Boonyasai, M.D., M.P.H.; Gigi Liu, M.D., M.Sc.; and Timothy Niessen, M.D., M.P.H.“I can’t tell you how professional, nice and friendly the nursing staff was. Even the food was fantastic, once I figured out how to navigate the extensive menu.”

When acetaminophen failed to lower Eldin’s temperature, the team, who was closely monitoring him, tried hydroxychloroquine, an immunosuppressive drug for which the FDA recently issued medical use guidance. The drug is being used experimentally for COVID-19 treatment, but is still under scientific investigation among experts across the nation who are responding to the pandemic.

“I think it helped me because about 48 hours after I started it, my stubborn fever finally broke,” Eldin says. “But that’s when my breathing problems started.” He was put on oxygen, but after a couple of days “it got so bad I had to go to the ICU,” he says.

There, he was treated with a high-flow nasal cannula, and fortunately never required a ventilator. As his condition improved, doctors gradually decreased the amount of oxygen he received and then released him from the ICU.

Eldin was discharged March 30, going home to the small farm he shares with his wife, sons and two Arabian horses.

Doctors and nurses with a COVID-19 follow up team call Eldin several times each week to check on his progress. He also uses an oxygen machine supplied by the Johns Hopkins Home Care Group several hours per day.

Yet his oxygen levels remained low, causing his heart to beat too fast. He was readmitted to The Johns Hopkins Hospital on April 19 with heart palpitations, receiving treatment in a non-COVID-19 unit before being released again two days later.

Because the disease is so new, it is not known if Eldin’s lungs will fully heal, says Garibaldi.

“I remember him certainly for those reasons, but I also remember him because he’s a very thoughtful guy, very insightful,” says Garibaldi. “One of the big challenges of working in this environment is making sure we don’t lose sight of the patient’s story. Sammy is a reminder of the importance of developing those relationships.”

Learn more about COVID-19 and Johns Hopkins on our coronavirus site.