A Serious Diagnosis — An Expert Team 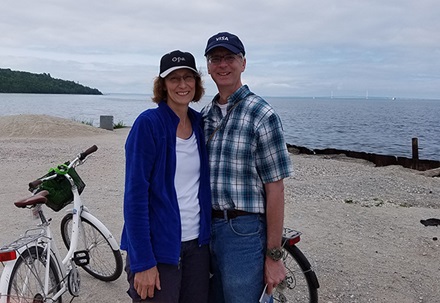 Kundry Grove, a nurse from Pennsylvania, was diagnosed with breast cancer just 10 days after her father died.

"A lot of things felt upside down," Kundry remembers. Losing her father affected her diagnosis — as a physician, he would have provided helpful counsel. But her sister, Kirsten, also a physician, was there to provide guidance and encouragement.

After hearing her diagnosis, Kundry recalls, she wanted the cancer out the very next day because she was terrified it would spread. Her local doctor was out of town for a few weeks, so her brother, who worked at Johns Hopkins, suggested she visit the Johns Hopkins Breast Center. She was evaluated within a week.

As a nurse, Kundry says she knows a seasoned, attentive practitioner when she sees one. “Things just went way better from the moment I stepped foot inside Johns Hopkins,” she says.

Remembering her mother’s journey with breast cancer helped shape Kundry’s decision: “I watched what she went through…. [Her mother] didn’t have the option for good breast reconstruction after her cancer, which was many years ago,” Kundry says.

“She wore an external prosthesis,” she says, “but it felt terrible against her numb skin and she had a hard time finding clothes that looked right due to lymphedema caused by her mastectomy.”

All the new cancer surgery and reconstructive breast options at Johns Hopkins encouraged Kundry. However, she admits, “I struggled with the idea of reconstruction, worrying that it might be unnecessary vanity.

“But for me, breast reconstruction after having cancer helped me move forward with as much strength and normalcy as possible, both physically and psychologically.”

The first part of Kundry’s treatment would be surgery performed by David Euhus, M.D., director of breast surgery, to remove the cancer. Then, the plastic and reconstructive surgery treatment team would rebuild her breasts. To prepare for reconstruction, the team placed tissue expanders in Kundry’s chest before completing the cancer surgery.

Then, Kundry says, they waited. It is important to wait after the cancer is removed before moving ahead with breast reconstruction, because radiation and other cancer treatments after the operation can affect the surgery’s outcome.

Once it was clear that Kundry wouldn’t need radiation or chemotherapy, she underwent a deep inferior epigastric artery perforator (DIEP) flap.

DIEP is a type of autologous breast reconstruction, which rebuilds the patient’s breast using her own abdominal tissue for comfortable, natural results. Only a few treatment centers around the country perform this since it’s a technique that involves intricate microvascular surgery. The treatment team uses skin and fat from the patient’s abdominal wall, transferring its blood vessels, which are then connected to the vessels in the chest.

An Active Life and a Confident Outlook After Breast Cancer 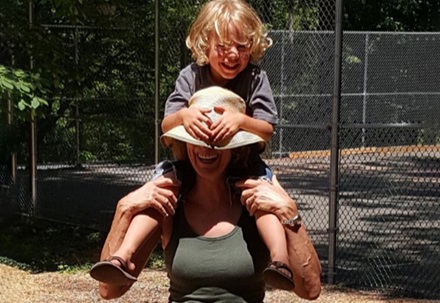 Four years later, Kundry is overjoyed with the results of her DIEP reconstruction, and she is back to her active life, gardening, biking, hiking, yoga and playing with her five grandchildren. She continues her career as a perianesthesia nurse.

"If I could, I would tell everyone who cared for me how wonderful they are. From the anesthesiologist who kept me safe, to the nurses who provided their excellent care — they're a wonderful team. I think of them every single day.

“My husband and I think of my doctors as the heroes who run into burning buildings and bring people back to strength and normalcy. It’s truly amazing.”