The original "Accident Room" at Johns Hopkins Hospital was a two-bed facility, and the first patients were treated free of charge. A police patrol wagon transported patients because ambulance services were not yet widely available.

Hopkins physicians were instrumental in developing the specialty of emergency medicine. In the 1950s, Hopkins originated the Emergency Squad Doctor Plan so that a physician on call could be taken to the scene of an accident to administer on-the-spot treatment. That initiative evolved into the Department of Emergency Medicine, which continues the tradition of innovation, service and excellence. 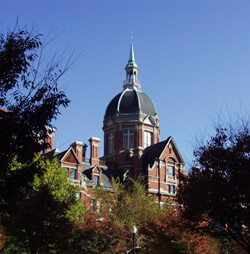 The Johns Hopkins Department of Emergency Medicine, as it evolves, remains true to its original mission: excellence in teaching and research and quality care for all patients, regardless of ability to pay.