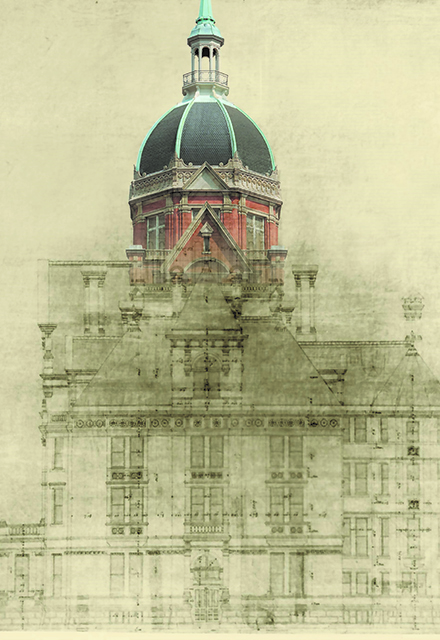 The Johns Hopkins Hospital, completed in 1889, was considered a municipal and national marvel when it opened. It was believed to be the largest medical center in the country, with 17 buildings, 330 beds, 25 physicians and 200 employees. As a Baltimore American headline put it on May 7, 1889, the hospital’s opening day, “Its aim is noble,” and its service would be “for the good of all who suffer.”

Choosing a Site for the New Hospital

Johns Hopkins had no intention, at first, of putting his hospital on the site of Maryland's debt-ridden mental illness asylum. What he had in mind was a peaceful retreat on Clifton, his 330-acre country estate. He envisioned a pavilion-style hospital surrounded by well-kept gardens and wrought-iron fences.

When patients at the old asylum were being moved to a new hospital in Spring Grove, near Catonsville, state lawmakers approached Hopkins about buying the asylum site.

At first, Hopkins turned them down. He was familiar with the 13-acre property at the crown of what was then called Loudenschlager's Hill, two miles due south of Clifton. He had helped manage the asylum for two decades as one of his many philanthropic projects. And, in fact, the site had an even older history as a general hospital, built not only to treat patients with mental disorders, but also to cope with a staggering epidemic of yellow fever, which killed 1,200 people in Baltimore in 1798. (As it happened, the scourge was over by the time the original hospital was completed in 1807, so it was used mostly to treat sailors and watermen, those who had no one to care for them at home, and those with alcoholism or mental illnesses.)

Johns Hopkins changed his mind and paid $150,000 for the site when the 12 hospital trustees he had chosen to help shape and guide his project pointed out that if he wanted to help the poor, he ought to build his hospital closer to where they lived. Some historians have suggested that the founder also was encouraged to build the hospital on high ground — the 1868 Jones Falls flood that demolished much of the center of the city and killed 50 people was then still fresh in local memory.

When Hopkins died on Christmas Eve, 1873, much of the site had been razed, but he never got to see so much as a blueprint. Eager to get a plan in motion when Hopkins' willed fortune became available, the trustees turned to five well-known hospital planners, and settled on the advice of one: John Shaw Billings.

Billings and Construction of The Johns Hopkins Hospital 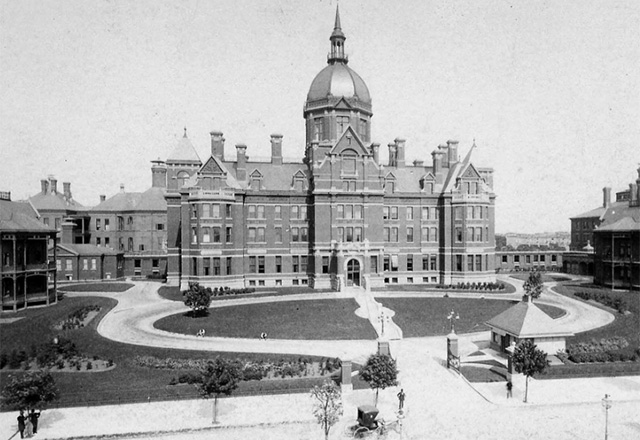 The Johns Hopkins Hospital at the time of its completion in 1889.

A skillful surgeon, and at that time a major in the U.S. Army, Billings had established himself as an expert in hospitals and public health after the Civil War by writing scathing reports about the inadequate construction and management of military hospitals. In coming up with a plan for Johns Hopkins, Billings turned to leading hospital authorities in England, Scotland, Germany and Austria.

Excavation of the property began in 1877, and another acre was added shortly after Hopkins' death.

The buildings took a long time to finish, primarily because the $2 million project was funded solely by interest from Johns Hopkins' $3.5 million endowment. Year after year, the trustees dutifully let construction proceed only to a certain point, and then had to halt it and calculate how much they could afford the next year. Construction crews found quicksand and veins of water running through the property, and had trouble at first laying stable foundations. By the time the Hospital was completed 12 years later, only six of Hopkins' 12 handpicked trustees were still alive. 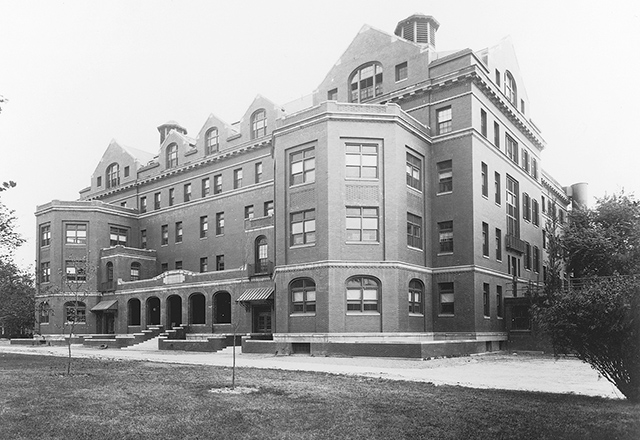 On the other side of the Hospital is the original Henry Phipps Psychiatric Clinic, dedicated in 1913. Named after the Pittsburgh steel magnate who paid for its construction, the five-story red brick building has been carefully preserved, though psychiatric care and research were moved to separate, more modern facilities in 1982.

Designed by architect Grosvenor Atterbury and renovated in 1983 by RTKL Associates, the Edwardian-style building's two wings partially overlook Fells Point and form a U around a garden court, complete with its own fountain, boxwood and trees.

Zelda Fitzgerald was among the many patients treated at the Phipps Clinic, the first psychiatric clinic in the country associated with an academic medical center.

A Design for Healing and Health

The original Johns Hopkins Hospital was designed by the Boston architectural firm of Cabot and Chandler, which completed the initial plans prepared by architect John Niernsee. All the structures were made of red brick, trimmed with Cheat River stone, a blue sandstone from West Virginia, and molded terra-cotta. Glass for the windows was imported from France.

Niernsee followed John Shaw Billings’ meticulous instructions for creating a hospital that would limit the spread of disease, using principles that were both innovative and progressive for their time.

Late 19th century hospitals were considered unhealthy breeding grounds for sickness, and the germ theory of disease was still in its infancy. People supposed that many illnesses were caused by infectious, foul-smelling vapors called miasmas.

While it is unlikely Billings subscribed to the miasma theory, his design for the new hospital intended to protect patients from contaminated air by way of an unusual, but precisely calculated, ventilation system. For instance, he arranged for air in some rooms of the isolation ward first to pass over heating coils in the basement, causing it to rise through holes in the floor and be pulled up through the patient's private chimney.

The point, said Billings, was to "supply a large amount of air, about four cubic feet per second, to each inmate, and to have this air pass constantly upwards, so that no portion of this air shall be rebreathed or come a second time in contact with the patient, thus placing him in the condition of being out-of doors in a very gentle current of air."

To keep contaminated air from one ward from permeating the next, Billings laid out the wards one behind the other like a series of brick barracks instead of stacking them in a many-storied building, a less expensive option.

Billings made sure no air could travel even through the basement corridor that connected the wards, by designing stairways that opened to the outdoors instead of directly into the wards. A doctor making rounds through this corridor had to climb a winding staircase, at the top of which he found himself outside on the corridor's open-air roof, facing a ward's closed door. Patients on stretchers were carried up the same way since there were no elevators. Billings believed digging elevator shafts would only give infectious airborne particles a new path of entry, and he wanted to take no chances.

Other Firsts at The Johns Hopkins Hospital

There were other innovations: The Johns Hopkins Hospital was the first in the nation to be equipped with central heating. Most inside corners were curved to avoid the buildup of dust and dirt. The hospital was wired for electricity and telephones, even though electrical service was not yet available in that part of Baltimore.

The day the hospital opened, Billings expressed satisfaction with what he, Niernsee and the builders had accomplished as he addressed a gathering of about 600 for the unveiling.

"Corners are to a great extent done away with, and easy curves given in their place. Even at the junction of the floor and walls there is a curve instead of the usual right angle, and I advise you to look at it and see how it has been produced, for it ought to become fashionable and take the place of the old mopboard in all well-constructed homes." 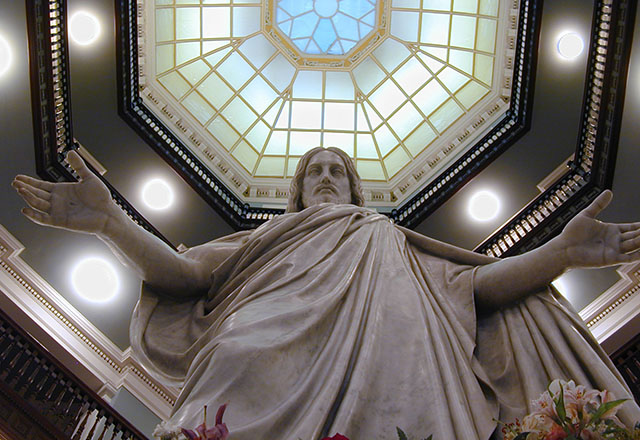 The "Christus Consolator" or "The Divine Healer" statue, shown above, is located in the lobby of the domed Billings Administration Building at The Johns Hopkins Hospital.

Lithographs that ran in the local newspapers the morning the hospital opened show an open rotunda, with octagonal design work in the center of the floor. Soon after, that centermost spot was covered over by a 10 1/2-foot Carrara marble Christ statue that has stood there ever since.

Donated in 1896 by William Wallace Spence, a Scottish immigrant and one of the wealthiest businessmen in Baltimore, the statue is an exact copy of the Christus Consolator that Danish sculptor Bertel Thorwaldsen created for Copenhagen's Frue Kirke in 1821.

Why the nonsectarian hospital acquired the religious symbol is open to speculation, but the day Johns Hopkins opened, University President Daniel Coit Gilman publicly asked for someone to come forward and donate a copy of Thorwaldsen's work. Gilman’s request may have been intended to offset criticism from the more conservative element in late 19th century Baltimore that the hospital had no religious affiliation.

Whatever the case, getting the artwork in place was a major feat.

“Jesus came in through the north door," according to the hospital's first doorman, William Thomas, who remained with the hospital until he died in 1958. The statue had been pulled from the wharf on a wood sled drawn by four horses, all the way up Broadway to the hospital's north entrance, then slid down a short corridor to its present position. 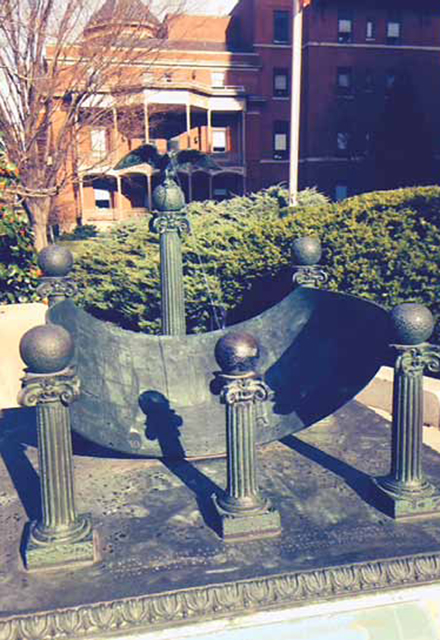 Through the years, Hopkins employees have rubbed the statue's toes in passing, and patients often pray before it. “The Divine Healer” has become a symbol of compassion and hope.

On the terrace just outside the Broadway entrance stands another object that has taken on similar, though lesser, emotional significance since George McGaw, a Hospital trustee, had it placed there in 1905.

One of Adolf Meyer's more prominent psychiatric patients credits a sundial, designed by Albert Crehore of Yonkers, N.Y., with spurring him to improve his outlook and get on with what turned out to be a highly successful career. The dial's weatherworn inscription reads, "One hour alone is in thy hands, the hour on which the shadow stands."

Only three of the Hospital's historic Queen Anne style structures, added to the National Register of Historic Places in 1976, still stand: the domed administration building (now named for Billings), flanked on either side by what were matching men's and women's private wards that face west on Broadway. (Originally called "pay wards," now they house portions of the Brady Urological Institute and the Wilmer Eye Institute.)

Today, The Johns Hopkins Hospital complex sprawls over 22 acres. Some 74 elevators connect medical units stacked up to 15 stories high, with infection controlled through means more sophisticated than anything Billings could imagine. 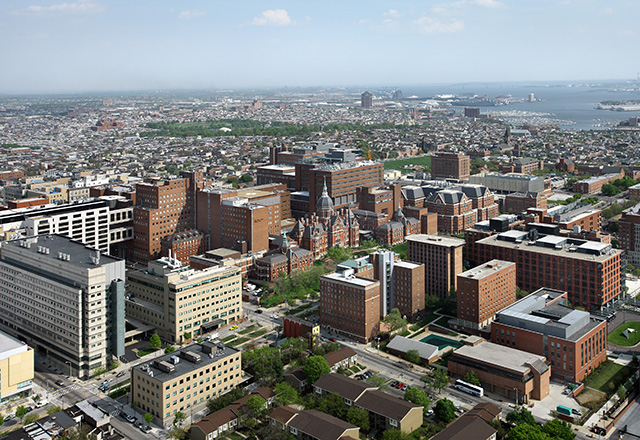 An aerial view of The Johns Hopkins Hospital complex in East Baltimore.

World-renowned specialty centers — mini-hospitals in their own right — have risen from the site, including the Wilmer Eye Institute, the Adolf Meyer Center for Psychiatry and the Neurosciences, the Brady Urological Institute, the Heart and Vascular Institute, the Sidney Kimmel Comprehensive Cancer Center, the Children's Center, the Meyerhoff Center for Digestive Diseases, and the A. McGehee Harvey Teaching Tower and Russell Nelson Patient Tower. Each major center is designed not just for diagnosis, treatment and care of patients, but to accommodate research and education to advance each field.