Kimberly and Erin Pryce and their sisters come to terms with their father’s Huntington’s disease and their own futures. 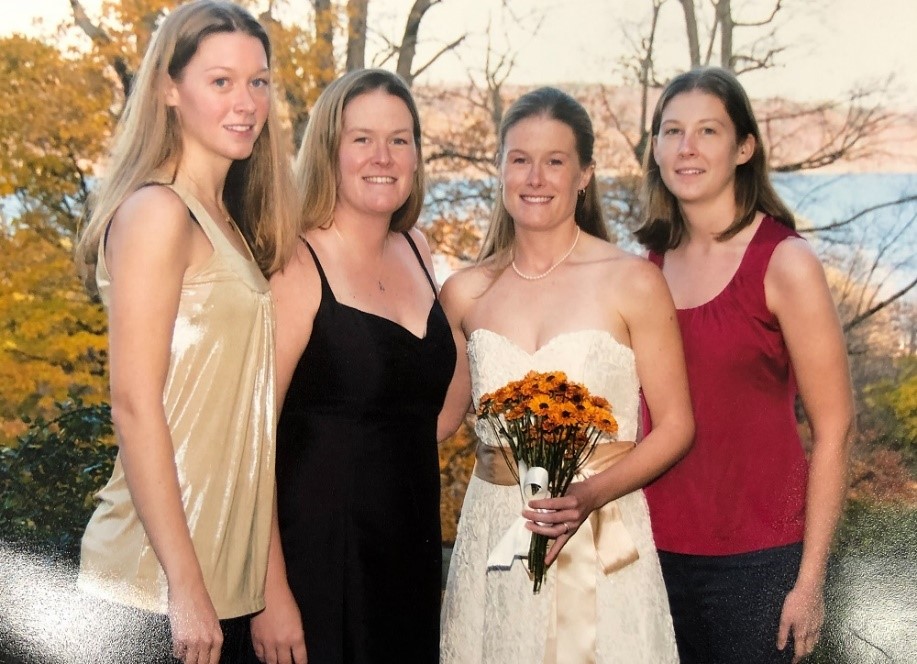 “It’s a flip of a coin.” That is how Kimberly Pryce describes getting tested for Huntington’s disease, or HD. Heads, you’re facing a progressive, life-threatening brain disease that you can pass on to your kids. Tails, you’re OK.

In 1977, Jim and Barbara Pryce were expecting twins — Kim and Kelly. They got a call from a doctor who had diagnosed Jim’s mother with Huntington’s disease. He warned Jim that he and others in their family might be at risk. Jim got genetic counseling and the tests, though inconclusive, looked reassuring.

But 15 years later, his wife Barbara started noticing changes in Jim, and so did their children. By then, Kim and Kelly had two younger sisters, Tracy and Erin.

“Dad seemed stressed. They’d been fighting a lot, and Dad seemed different, more irritable than usual — mean, in fact. I’d noticed that he had some shaking movements in his hand that reminded me of our grandmother’s hands,” Kim recalls.

When Jim kept lashing out, Barbara got him to agree to marriage counseling. Kim says that one day, according to Barbara, the counselor commented on Jim’s tendency to sandwich his hands tightly between his knees during their sessions together.

“He was hiding the tremor,” she says.

Jim was tested again at Johns Hopkins. By this time, more accurate genetic tests were available, and his results were positive. The family pulled together and coordinated their efforts to care for Jim, taking over for one another to accommodate school and jobs.

Kim says Barbara, the family matriarch, provided most of the care for Jim. “Mom did the heavy lifting. While we were taking turns living at home, she was there from day one until the end.”

Jim’s own career became a casualty of his illness. “He and mom were both physical therapists, and when he couldn’t practice, it was hard on him,” Kim says. “In 2000, he fell and got a concussion. That seemed to accelerate his symptoms; his balance and dexterity got worse, and his group had to let him go. He kind of shut down after that.”

Erin, the youngest of the four sisters, notes that the entire family missed the Jim they knew and loved. She says, “The hardest part was his personality change. Looking back, I think he was embarrassed. He wanted to be able to make a sandwich, take care of himself.” 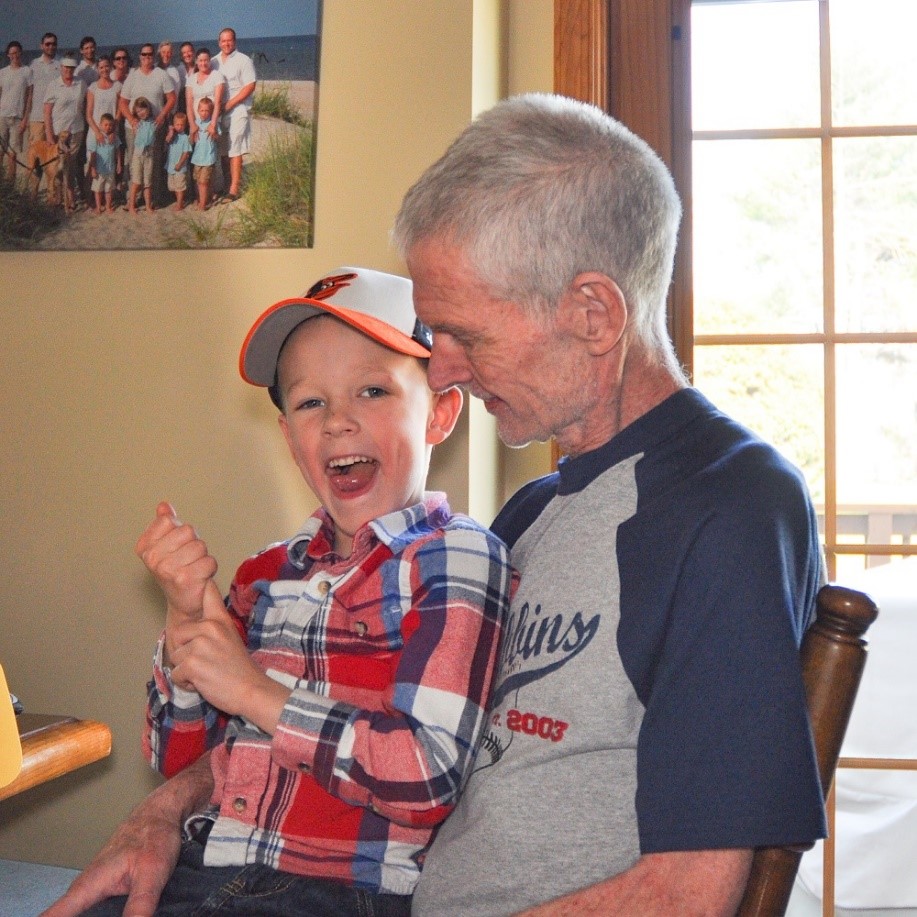 Jim Pryce, with his grandson, 2014. (Photo courtesy of Kim Pryce)

Jee Bang, M.D., M.P.H. is the clinical director of the center. She explains that treatments for Huntington’s disease focus on improving symptoms. Medications can lessen the impact of depression, irritability, anxiety and obsessive-compulsive behaviors. “For motor symptoms, especially chorea, we have several options to reduce that symptom as well,” she notes. A social worker on the team helps patients and families navigate the policies of disability, social security and choosing care facilities.

Despite supportive care, the relentless disease progressed. In June 2015, surrounded by his family, Jim Pryce died.

Erin Pryce, the youngest says, “When they diagnosed my dad, they explained that my sisters and I were at risk. They said that if any of us were positive, by the time we were old enough to have symptoms, there would probably be a treatment.” She chuckles: “I didn’t buy it.”

“No one discussed testing at first,” Kimberly says. “Then, in 2003, I was just out of college and pondering law school. I was in a serious relationship and I knew I wanted kids, so I wanted to know.”

Bang says, “People have different reasons for coming to us for testing. They may have a family history, or they’re thinking of starting a family or taking a new job.

“Our genetic counselors review the family history and talk about what the different test results mean. For HD, there are some gray areas — some who will definitely get HD, and others who may or may not. Still others have intermediate genetic status which does not cause HD in themselves, but could lead to the disease in future generations.”

The twins were tested first. Their results were negative. Kimberly says, “Kelly and I were relieved, but instantly, I thought about my sisters and what their statuses might be. Huntington’s is a family disease and experience. No diagnosis is singular to one person — it permeates the family.”

Tracy’s was negative, and within months, she was pregnant. Erin’s test for Huntington’s disease was positive.

“Huntington’s is a family disease and experience. No diagnosis is singular to one person — it permeates the family.”

Living Life and Helping Others 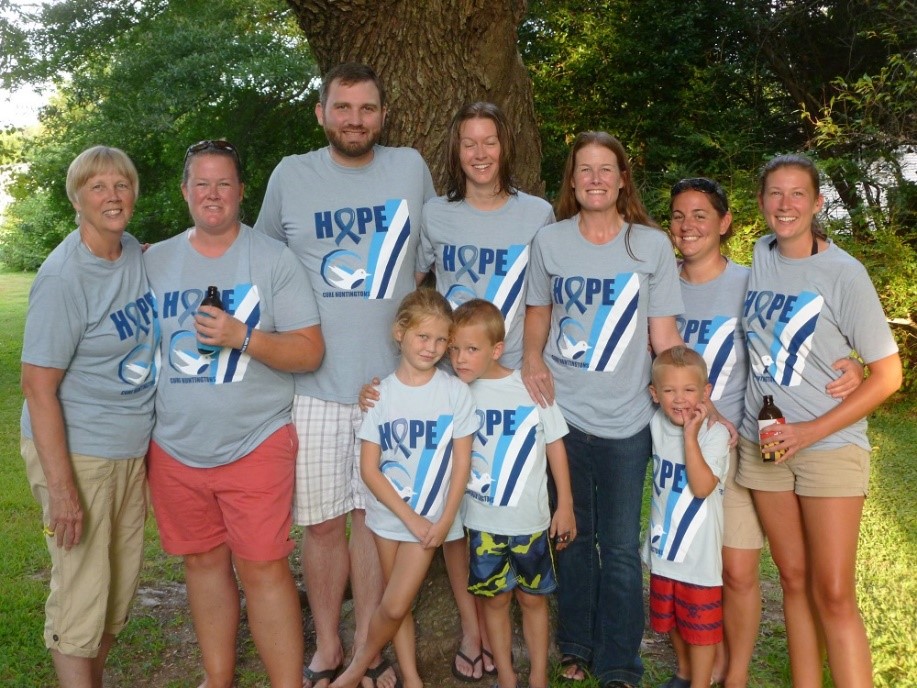 The Pryce family, after a Huntington's disease support event in 2016. (Photo courtesy of Kim Pryce)

All four sisters are involved with the HDSA in Maryland, enlisting friends and family to contribute to the group’s annual fundraising walk. Erin is a perennial leading fundraiser for the HDSA walk, in which Bang herself has participated for years.

With the encouragement of Jim’s former social worker, Kim serves on the Johns Hopkins Huntington’s Center of Excellence advisory board. “Our family supports HDSA and the Center of Excellence at Johns Hopkins. There’s money to be made for both,” she says. “This year we’re concentrating on support for the local community to ensure they’re getting the best care and access to clinical trials.”

Even more, Kimberly is adamant about staying strong for Erin. “When you get a diagnosis like that, you can give up and wait, or you can live your life.

"Erin is doing that. She’s active, raising money and awareness, and participating in studies. The whole family is so proud of her. She is a rock star.” Whereas Jim kept his HD a secret, Erin says she’s open about her own diagnosis, posting on social media and raising awareness.

Bang describes the Pryce sisters as both fearless and fierce in their HD advocacy. The admiration is mutual. “We love Dr. Bang,” Erin says. “She’s met our families, and she makes us feel comfortable. You’re never just a name on a folder with her.”

Today, Kim notes that the sisters make a point to have fun together, meeting up for a beer, going on vacations and attending baseball games with their families whenever possible. Sticking together — and maintaining a sense of humor — are essential.

Erin is philosophical. She says, “I never wanted kids anyway, so if it had to be one of us, it was better that it was me.” She laughs, “If worst comes to worst, my sisters can pass me around so I don’t annoy any one person too much.”

“The disease didn’t end for our family when we lost my grandmother, and it didn’t end with my father,” she says. “But it will end with me.”

Huntington’s disease, or HD, is a progressive illness characterized by the breakdown of neurons (brain cells). It is genetic and can be passed from parents to children. HD symptoms include uncontrolled movements, problems with thinking and emotional disturbances.