Howard Woolley laughs a lot when describing his late wife, Gail Campbell Woolley, a longtime journalist who began her career with the Washington Star and the Balti­more Sun, and later joined the public relations team for Mobil Oil Corpora­tion. “Gail was a lot of fun,” he says. “Also, very honest. It was sort of like the Jack Nicholson line, ‘You can’t handle the truth.’ You didn’t want to be Gail’s friend if you couldn’t handle the truth.”

In her memoir, Soar, published post­humously, Gail explained the reason for this. “I can be pretty blunt. I am direct because I cannot stand to waste time I do not have.”

When she was 7 years old, she was diagnosed with sickle cell disease and told she would live to only 35. She proved that doctor wrong and made it to 58, packing more into her life than most of us could hope to—snorkel­ing in the Great Barrier Reef, going on safari in South Africa, working as a journalist on assignment in Russia. “Determined” underestimates her commitment to making sure sickle cell disease never slowed her down.

In 2014, Gail and Howard were in Brazil when an experience threat­ened her momentum. She had a sickle cell “crisis”—the name of the severe pain associated with the dis­ease—and had to be airlifted to The Johns Hopkins Hospital.

“When Gail was airlifted to Hop­kins and they saved her life, they noticed that she was having vision issues, and they sent some people over from the Wilmer clinic,” says Woolley. At this point, Adrienne Scott, M.D., a retina expert at the Wilmer Eye Insti­tute, entered the picture.

“Gail suffered a hemorrhage in her eye from an advanced stage of sickle retinopathy and lost vision from it,” says Scott. “We were able to operate on her eye, and she was able to regain some of the sight back in that eye.”

Gail Woolley and Scott discovered they had several things in common—primary among them the desire to see a ramp-up in sickle cell research, spe­cifically in the area of sickle cell reti­nopathy, or the damage done to the retina by the sickle-shaped red blood cells caused by the disease. Here, a prepared mind (Scott had developed a plan to better identify individuals at risk for losing vision from sickle cell retinopathy) met an unstoppable force: Gail Woolley, who began a philanthropic partnership with Scott, which her husband has carried on since her death.

Wilmer has a storied history in the field of sickle cell retinopathy research thanks largely to Director Emeritus Morton Goldberg, M.D. Goldberg developed the staging system for sickle cell retinopathy during his residency. “The staging of the disease as well as knowledge of its natural untreated course are im­portant because they help the doctor decide whether or not to intervene therapeutically and, if so, when,” says Goldberg. “There are always some risks for every treatment. It’s good to avoid treating unless you actually have to treat.”

When speaking of Goldberg, Scott says, “He revolutionized the field and described a lot of the retinal changes that happen with sickle cell retinopa­thy.” She points out that he did not have the imaging tools available today, so he accomplished this feat “because of his clinical acumen and observa­tion.”

There are multiple types of sickle cell disease, and a person’s likelihood of developing vision problems depends on the type. The most common forms of sickle cell disease are hemoglobin SS and hemoglobin SC. An interest­ing aspect of the disease is that while hemoglobin SS patients experience the most severe systemic symptoms, they have a lower risk of vision loss. The prevalence of proliferative sickle cell retinopathy for patients with hemo­globin SS is 20 to 30 percent, while the prevalence for patients with hemo­globin SC, who have fewer symptoms overall, is 60 to 70 percent, according to published literature.

Even as the Goldberg staging system has stood the test of time, technology has advanced quite a bit. “Now we have such interesting and novel and exquisite imaging tech­niques,” says Scott, referring to optical coherence tomography angiography (OCT-A). OCT-A provides images of blood while it is flowing, which means doctors can identify exact locations where blood has stopped flowing—an invaluable clue for tracking sickle cell retinopathy.

“Once we identify individu­als most at risk for vision loss, we are able to follow them more closely and intervene with treatments, such as laser photocoagulation and intravitreal anti-vascular endothelial growth factor injections, earlier,” she explains. These procedures help reduce the abnormal blood vessel growth that occurs in pro­liferative sickle cell retinopathy.

One of the challenges of sickle cell research, however, is funding. Despite its being far more common than several other inherited diseases, such as cystic fibrosis, as only one example, sickle cell disease does not receive commensurate financial support. This disparity inspired another supporter of Scott’s work, C. Boyden Gray, who served as White House counsel under George H.W. Bush and ambassador to the European Union (2006–07). “I know that it’s a significant gap,” he says.

Howard Woolley agrees. “It’s an un­derfunded charity, so if you target your philanthropic dollars into the sickle cell space, you can impact the quality of people’s lives in a meaningful way,” he says. That is why he has chosen to continue supporting Scott’s work in Gail’s name.

In her memoir, Gail cites a quote by Henry David Thoreau she considered the “blueprint” for her life: “If you have built castles in the air, your work need not be lost; that is where they should be. Now put the foundations under them.”

The philanthropy of the Woolleys and Gray is building a solid founda­tion under the work of furthering re­search into better treatment for sickle cell disease. Wilmer is the past, pres­ent and future of this mission. 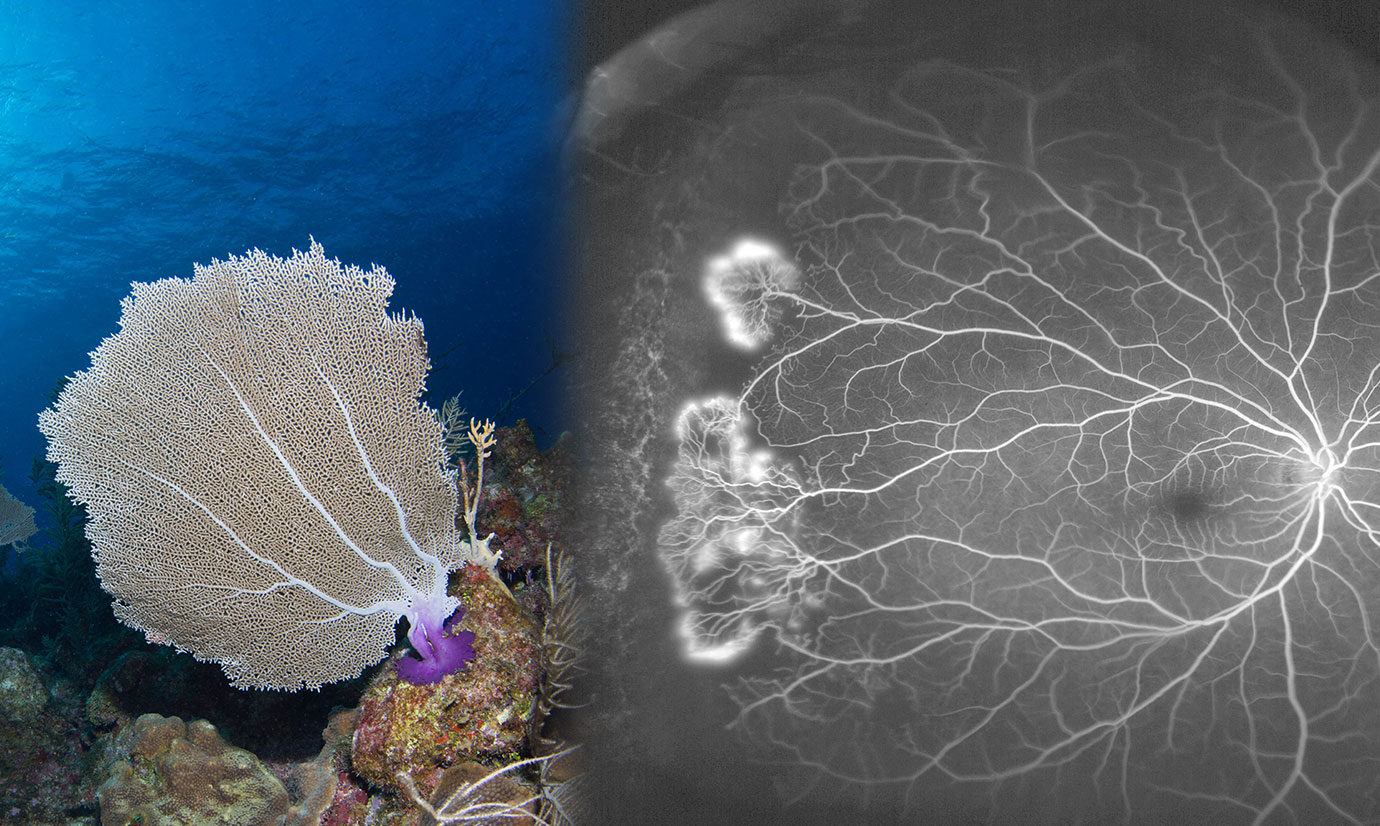 A Name to Remember

During a retinal exam of a patient with sickle cell disease, an ophthalmologist looks for abnormal retinal blood vessel growth. The patterns such growth takes indicate which stage, from I to V, the disease has reached. One of the patterns ophthalmologists look for is a “sea fan lesion”—so named by Wilmer’s Morton Goldberg, M.D., and Robert Welch, M.D. “It describes the largely two-dimensional branching proliferation of pre-retinal blood vessels,” says Goldberg.

At the time he was designing the staging system, in 1966, Goldberg was an active skin diver. “I looked at those sea fans and thought—they look just like what I see in the retina of sickle cell patients,” he says. Goldberg decided to name the pattern a sea fan lesion for “ease of remem­brance.”

It worked. In a recent editorial from the Journal of Vitreo­Retinal Diseases, Editor-in-Chief Donald J. D’Amico, M.D., writes, “Over the years, I have noted that this is the only lesion that is never forgotten by residents and fellows as they seek to master the deities niched in our retinal pantheon.”

Memorable names and accuracy have combined to keep the Goldberg stages of proliferative sickle cell retinopathy relevant and useful. “It’s to my absolute amazement that nothing has changed in that classification over 52 years. It’s not often that you can do something that stands the test of time,” says Goldberg.

It’s an underfunded charity, so if you target your philanthropic dollars into the sickle cell space, you can impact the quality of people’s lives in a meaningful way." — Howard Woolley